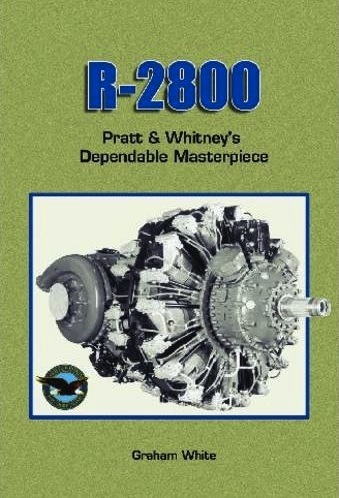 There are many storied aircraft engines, some indelibly associated with events that changed world history and thus known to the proverbial “man in the street.” White, a mechanical engineer by profession and with a lifelong interest in aviation, explains here why, in terms of manufacturing, performance, and maintenance, Pratt & Whitney’s R-2800 is “the finest aircraft engine ever produced.” In automotive terms, you might call it the Chevy Small-block V8 of aero engines—simplicity, economy, power. Not sexy, but useful.

Smaller books have been written that covered a larger number of engines but White devotes over 700 pages to extolling the virtues of just this one. The book is quite technical and there are parts the casual reader—if there is such a thing in regards to this topic—may be tempted to skip. Sections like the ones on Propeller Feathering may seem far removed from most people’s everyday experiences but even here we find lively observations of how engineering works, as well as admirably clear descriptions of fundamental technical principles that will interest anyone with a curiosity about mechanisms. Add to that the whole substrata of general history and personality profiles that White interweaves with the R-2800 story and you have a fully fleshed-out book.

Since this is a rather specialized subject, who better to put the book into context than a person who was actually involved in the development of that engine. We excerpt here from a letter to the author by a Frank Walker, a development test engineer during World War Two who developed the vital water injection system for the R-2800. His work, done under emergency conditions, enabled the Republic P-47 Thunderbolts to reclaim the ground lost to the German aircraft that outperformed it. All too often it is not appreciated that wars are won and lost as much in laboratories and design offices as in the field. Even the engineers and scientists themselves may perceive their efforts, sacrifices even, as being less relevant than the blood shed by the actual combatants. Frank Walker grappled with that dichotomy—until he read of his own work in this very book!“[This book] has to go down in the annals of ‘masterpieces of literature’ and I don’t say that lightly. . . . It is obvious that a very technical subject is presented not only in a ‘technically correct’ manner but it is impressive how the various personalities are woven into the subject matter in a way that gives the book a human touch. I have found this to be very interesting, especially since I knew so many of them personally. It makes me proud to have made some small contribution to it [the R-2800] and I think my efforts are accurately described. Frankly, I must admit that during the war and quite often since then, I have felt guilty in not serving in the armed forces, however, when I read what the comparatively few engineers accomplished at P&W during the war years it makes me realize that in some small manner I ‘served my country.’ Thanks to this fine book I have finally come to grips with this issue!”

Beginning with a brief summary of the pros and cons of radial engines, the author sketches the history of the Pratt & Whitney company before going into great detail about the development of the R-2800, the multitude of variations of this motor and their respective specs, propeller configurations, the military and commercial fixed and rotary wing aircraft fitted with this engine, and comments on operating and maintenance issues. Each chapter is followed by notes, and the index is exemplary. The text is supported by hundreds of b/w photos and technical/cutaway drawings (some in color) as well as tables, charts, and graphs.

The harcopy edition of this book is no longer in print but can still be found.

Porsche 917: The Heroes, the Victories, the Myth »
« NSU, The Complete Story