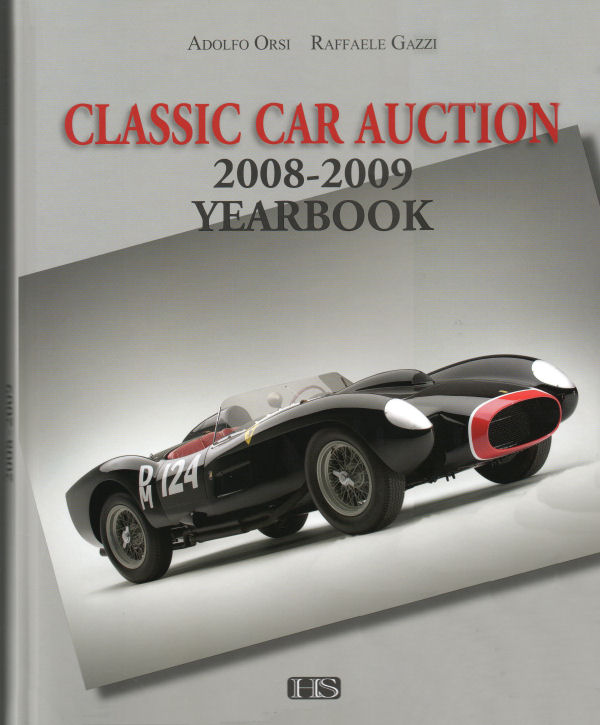 If you follow car auctions at all you will know the Classic Car Auctions Bolaffi Calalogue produced by the same authors in 12 editions between 1995 and 2008. The Bolaffi catalog had been started in 1991 and had evolved from the one that Orsi’s grandfather, Adolfo, whose family had taken over Maserati in 1937 and who stayed on as nominal president even after the 1968 takeover by Citroën, had started in 1955. The US collector car insurance firm Hagerty, which offers a wide array of resources to the collector community, adopted in 2006 the publication of this book but due to branding issues it doesn’t say “Hagerty” anywhere on this edition of the book (unlike the 2006–2008 edition). The listed sponsor is Credit Suisse, the main partner of the Goodwood Revival and a significant presence in the classic car world.

The purpose of the book is to summarize an entire year’s worth of data from the major automobile auctions. This edition contains data for the August 2008–July 2009 auction season, listing cars in alphabetical order by marque/maker and within that by year further subdivided by body style or builder.

Each entry lists color and, if applicable, a brief description of salient details such as restoration, competition, or show history as well as unusual specs, and occasionally mileage. The data that makes this book an utterly unique resource to the serious collector, broker, journalist, or auctioneer are the next set of entries: chassis number, steering (i.e. left- or right-hand-drive—an often crucial factor in sale price), auction estimate, hammer price (in £/$/€), sale date and location, lot number and auction house. In those cases were a boldfaced number is listed below the name of the auction house it refers to a corresponding b/w photo of that lot shown on that same or the next page; there are hundreds of them. From Abarth to Zimmerli, the yearbook lists 3458 classic cars.

The book starts with an overall summary analysis of market trends written by the department heads at Artcurial, Barrett-Jackson, Bonhams, Gooding, and RM. This is followed by a table of the Top 100 of the season, listed in descending order and accompanied by a market analysis with several graphs and marque statistics compiled by the editors. A section of detailed descriptions with color photos, usually one to a page and largely taken from the respective auction catalogs, of the season’s Top 10 cars precedes a listing of all the auctions by vendor and date covered in the book. The blow-by-blow entries described above make up the bulk of the book. At the end of the book is a brief listing, with color photos and basic stats, of the 1993–2008 Top 10.

There is no other book that puts all this data at your fingertips!