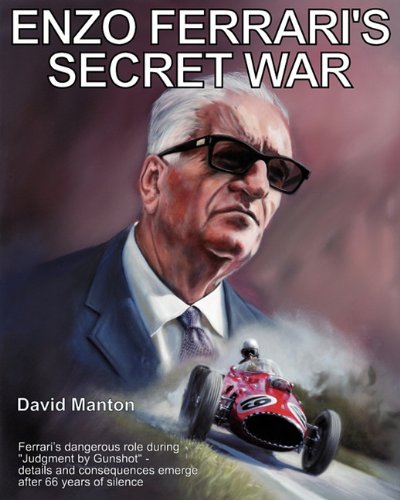 David Manton has been a fanatical racing car enthusiast ever since he saw a V12 Ferrari Dino taking part in a “round the streets” race in his native Napier, New Zealand in 1961. The driver was Pat Hoare (1917–1970) who had been keen on motorsport from a young age. As a Warrant Officer with the 2nd New Zealand Army Division, part of the Allied Eighth Army as it advanced through Italy during 1944, Hoare had responsibility for keeping a fleet of trucks mobile under the arduous conditions then prevailing.

He seems to have made contact with Enzo Ferrari, but, such is the silence that has prevailed for over 70 years since those days, how to come up with so tantalizing a title as Manton’s? Italy after 1943 was in a state of virtual civil war. With Italian fascism unravelling after 20 years; the Germans’ enforcement of their more brutal regime; their “scorched earth” destruction of the countryside as a gradual retreat prevailed; Italian resistance factions at virtual war with each other; how the local populace survived we can hardly comprehend. For Italian businesses the stresses must have been enormous, and scores were being settled amongst those who were perceived to be supporting the Axis, with several well-known industrialists kidnapped, murdered, or disappearing.

Enzo Ferrari, always an enigma, had achieved independence from Alfa Romeo, but with whom did his industrial empire work? It was all a very long time ago; memories have faded, been obliterated, or colored. Manton has carried out a great deal of research, involving numerous trips from New Zealand to Italy, and lists over 250 organizations and individuals who have helped him; another 6 Italians, 2 North Americans, 5 New Zealanders and 1 Australian have remained anonymous.

Whether Ferrari was helped by Pat Hoare purely by steering truck maintenance to him, the affinity that the New Zealanders, including the Maori Battalion, developed with the Italians, and the subsequent networks, it does appear that Ferrari felt he owed a debt to Hoare. Ferrari’s great designer, Gioacchino Colombo (1903–88), may have been rescued from retribution by the New Zealander’s actions. Colombo had been suspended from Alfa Romeo by the Partisan and Communist factions controlling the company when the war ended. Colombo claimed in his memoirs that Ferrari sought him, and Ferrari that Colombo came to call, but the great engineer was certainly cleared somehow to resume his career, and lay the foundations for those great Ferrari engines. Manton claims that Hoare, together with other (unnamed) New Zealand Army officers who were certainly aware of Ferrari, had enough power to “put in a good word” for him. Here the chronology is a bit dodgy, for the one soldier Manton mentions by name, Lt. Nevile Barker (1912–44), a friend of Hoare from their school days in Christchurch, was killed by a land mine in February 1944, surely too early for their discussions to venture from daily survival to postwar Italian motor industry.

It was all a very long time ago; nothing seems to have ever been written down, and Manton has enlarged his theories by noting every link between New Zealand and the Italian racing car companies, but, despite the retired driver Chris Amon’s special relationship with Enzo Ferrari, silence still prevails. Despite the two countries’ remoteness from each other, there had been a thriving Italian community in New Zealand before the Second World War, strained though it must have been by threats of internment. It is also a small country, so that a considerable proportion of those who have been involved in helping Manton are known to us all, and wry smiles result from some of the accounts. Those who saw the very special V12 Ferrari that Hoare acquired, and Manton first saw in Napier in 1961 will always remember it; with a full fuel tank the tail almost dragged on the ground as the clutch was let in. A profile image of Hoare and his Ferrari appears at every chapter heading. It is a pity that the clear font size is not reflected in the quality of the numerous illustrations, all black-and-white, which recede into the mud of the paper selected by the American printer and publisher.

David Manton’s is a valiant attempt to throw light on a remote era, but the gloom remains. Considering that Manton is a proper journalist with international credits one is inclined to say that this is not for lack of trying. (Also, just a few weeks ago the US commemorated Martin Luther King Jr. Day so it is relevant to point out that it was Manton who had been a contributor as well as the on-air narrator for a TV documentary that the Voice of America produced within 24 hours of King’s assassination and screened in hundreds of countries.)