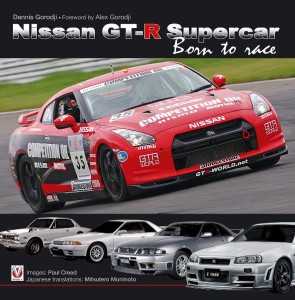 Even if you only pay peripheral attention to current cars you are probably vaguely aware that the Nissan GT-R is often singled out for its sophisticated handling. If you follow motorsports or have an interest in tuner cars you already know that that is quite the understatement and that the GT-R can well be said to have revolutionized sports car dynamics. It was chosen as the 2009 World Performance Car and the International Car of the Year. Whether you own one or are merely curious about it, prior to this book you had to know Japanese if you wanted to discover just what it is that makes this car so special. But it is not just the GT-R crowd that will benefit from this book.

“The story of the GT-R is a dramatic one. Each generation knew ups and downs, and each had its own philosophy and character, sometimes contradicting previous and later generations.”

Anyone who as a racer or engineer deals with the issues of vehicle dynamics and stability control–they key factors that distinguish this car—will pick up useful insights here from the thorough and well illustrated discussion of these principles. Having worked since 2000 in his father Alex’s shop in California that specializes in just this model, the author has had the unique opportunity to get to know these cars inside and out on a daily basis.

The modern GT-R dates to 1989 but its roots go farther back, to 1957, to the Japanese Prince Motor Company’s “Skyline” range of cars. You wouldn’t think from looking at the boxy, unglamorous cars that they were built by a bunch of former aircraft specialists—and that they could give Porsche Carreras and Jaguar E-Types and Corvettes a run for their money! This is where the book begins. Nissan took over Prince in 1966, turning an already successful passenger and competition car into one of the fastest mass-produced cars in the world. From the first Prince Skyline ALSIS-1 all iterations of this model are described, laying the groundwork for the in-depth treatment of the GT-R prototypes and then the subsequent production cars up to the current R35 Spec V.

Already after page 27 the gloves come off and the book gets technical very quickly, examining the features and operation of Nissan’s ATTESA E-TS all-wheel drive system. Before you know it you’re confronted with acceleration charts and drivetrain evaluations, torque and friction theory, and suspension geometry. There’s no math or formulae but without a basic interest in vehicle dynamics a reader may well be tempted to skip these bits. Don’t! These lines of inquiry are pursued throughout the entire book as they are at the core of what this car is all about. You could enjoy your GT-R without knowing any of this, but why? Besides, it’s interesting!! All the science is embedded into a chronological narrative of the genesis of the model, descriptions of its major systems, lists of technical and model specs, and model-to-model comparisons including even exterior and interior design aspects (even paint names and codes!). Tables list issue dates and different parts used. Also given are race results of every event in which GT-Rs participated. The R35’s Multifunction Meter is described in detail and its various settings illustrated.

From assembly to specific components to racing, every aspect of the foregoing is amply illustrated with photos, graphs, and schematics. The photo captions are very specific in identifying the model or variant and, if applicable, driver, team, location etc. While the book does cover global production models, most of the passenger cars shown are European or Japanese home-market versions.

The Table of Contents is very detailed but doesn’t show chapter numbers, only their titles. Chapter 6, “A Look into the Future,” based on a not yet published study by Alex Gorodji, is interesting for its—rudimentary at this stage and in this context!—discussion of “a new branch of applied psychology” that aims to examine driver psychology vs. electronic dynamics control systems, or, simpler, how objective car dynamics correlate with subjective driving pleasure. The Appendix lists 1989–2007 specs and the Index is sufficiently detailed.

A GT-R is a competent car right out of the box but its full potential is only realized in the hands of the owner who modifies it. That sort of owner will also want to read Alex Gorodji’s The Nissan GT-R High-performance Manual–An International Guide to High-Performance Components (ISBN: 978-1-84584-224-6, same publisher).

Behind the Wheel: The Great Automobile Aficionados »
« Le Mans 1960–69: The Official History of the World’s Greatest Motor Race