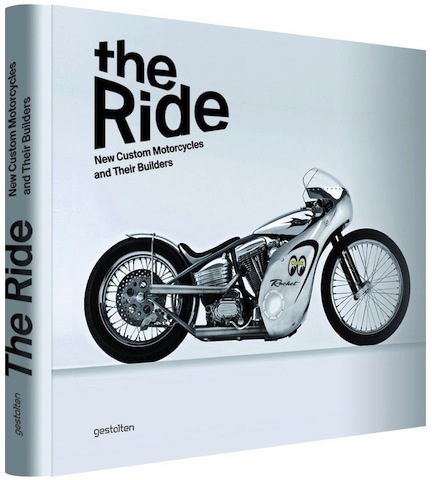 “If you wanted a bike to use every day, you bought a UJM—a Universal Japanese Motorcycle. It was a golden age for motorcycling. Most riders were satisfied with the production bikes on offer, so it was the more radical end of the custom scene that flourished.

This extremity, which excited some at the time, was the beginning of the end. Custom motorcycles began to lose their way: overloaded with chrome and aluminum billet, they became caricatures of what a motorcycle should be.”

Well, we have come back from the brink. The “behemoths of bling” have given way to more thoughtful compositions, and if there are excesses it is only in the hours lavished on certain builds.

Well, and the price, although some of the machines shown here can be had for only a few thousands (dollars, euros). Yes, this book names names and as applicable gives prices, and build times. Edited and compiled by luminaries in the motorcycle and custom worlds the book offers a snapshot of builders small, smaller, smallest the world over.

If Wheels & Wave festival, Bike Shed show, Dirt Quake or One Motorcycle Show mean anything to you, some of the names here may be recognizable but for most anyone else the book may be too random for its own good. As multi-faceted as it is, it makes you work for it. No Table of Contents—survivable but not helpful to the newbie. But also no discernible organization to the contents: Australia skips to Spain, then Japan, the US, Germany etc. There is a fine Index (builders, companies, photographers) but it lists everybody under their first name. Small as the custom world is, it is hardly so small that everybody knows each other by only their first name. Worse, this peculiarity is not disclosed so anyone who is reading about a builder in the main text and then turns to the Index to determine, say, the person’s country or web address will initially conclude the entry is missing. (Incidentally, German builder Urban Motor is inconsistently spelled with and without the final “r”—odd, because the publisher is in the same city [Berlin], as well as a serious bike rider, and should know.) 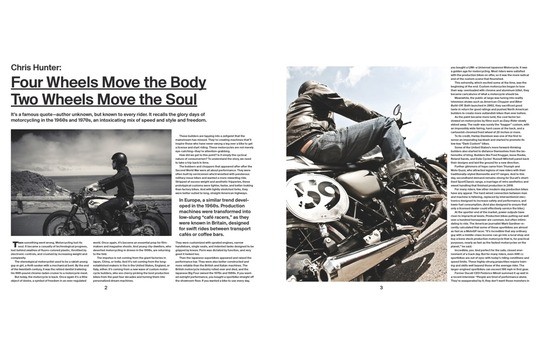 Even when you’ve made your peace with being expected to turn page after page to make your own discoveries you have to be on your toes because of less than helpful typography: the heads that start new builders are done in two different type sizes so it’s not inconceivable to stumble into a new entry without noticing it right away. All this unorthodoxy does accomplish something good: it forces the reader to slow down.

The level of magnification varies, partly dependent on the builder’s output and partly because the descriptions are written by different people—Chris Hunter (Bike EXIF), Paul d’Orléans (The Vintagent), Gary Inman (Sideburn), and David Edwards (BikeCraft, Cycle World). Their initials are shown at the end of each text and there’s a legend at the back of the book. Some of the bikes are already famous, such as Ian Berry’s Kestrel or Black whose intricacy the reader is encouraged to “meditate” upon, some are mainly of local renown such as Medaza in Ireland, but all are clever and purposeful and so very well made. Anyone with an interest in design, metalworking, serious engineering and also paint, color, and texture will look at these images with wide eyes and some envy.

In many cases the photos illustrate specific points in the text but, being uncaptioned, leave it to the reader to suss out—not always straightforward because there are so many unusual or hidden features. Each bike is accompanied by a data set that relates the basic vital stats but also build details, parts, and finishes.

Conceptually and practically this is not an easy book to “work with,” which may well be intentional, but it is full of fascinating bits, written by people who absolutely know their stuff, it is very well made, and it deserves to be savored. 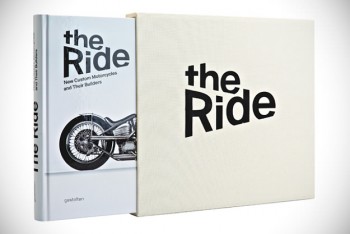 Also available with a linen slipcase and custom sew-on patch by artist Maxwell Paternoster (Corpses from Hell Motorcycle Gang) when ordered directly from the publisher. 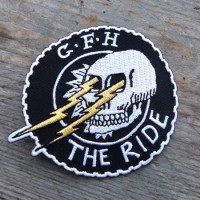 The Red Baron »
« 45 RPM, A Visual History of the Seven-Inch Record