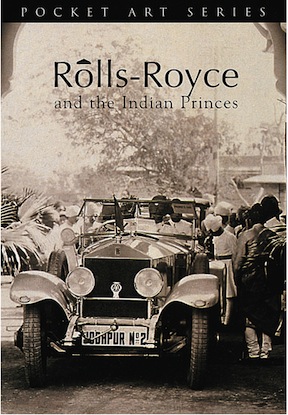 “…a quaint and curious volume of forgotten lore”

Quaint? Yes. First there is the small size. The handful of books in this mostly Indian-themed “Souvenir” series are reproductions of postcards—which are surely not meant to actually be torn out and mailed. While they do have blank backs, except for a photo caption running across the bottom, they have no pre-printed fields for postage and address. So, take the hint and don’t cannibalize the book! The 13-page Introduction summarizing the basic talking points of Rolls-Royce history and introducing the Maharaja angle also has a certain quaintness about it. The photo captions are rather brief, beginning with one line pertaining to the actual model shown and continuing with a few words of generic verbiage.

Photo sources are listed but readers with serious interests in the world of Rolls-Royce will be frustrated by the lack of chassis numbers or even coachbuilder information. While this should be no surprise considering the purpose and scope of this whole series, such information could have easily been provided because the vast majority of images is sourced from the archives of the Rolls-Royce Enthusiasts’ Club In England which as the go-to organization for all things R-R keeps meticulous files and thus rigorously annotates its photos. Actual examples of captions used here: “Rightfully, a Rolls-Royce was considered a treasure.” “During the First World War Rolls-Royces were commissioned as ambulances, staff cars and armoured cars.” “The Rolls-Royce brand name is a synonym for luxury, craftsmanship, and the best of technology.” Clearly less than satisfying. 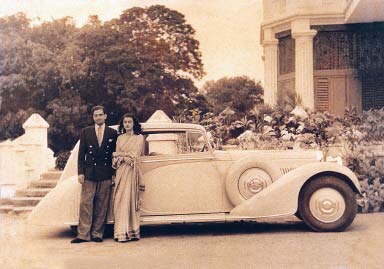 Curious? Photographs of older times and exotic locales can readily engage our imagination and foster romance. On this score author Baig does not disappoint: palaces, tiger hunts, crowded streets, turbans, fezzes, pith helmets, cars bejeweled, cars with purdah accommodation, assorted animals—the whole panoply of the riches/excesses of the world of the Indian princes is paraded in front of us, a world of wealth, privilege, prerogative and indulgence, and from today’s perspective, a world fanciful, romantic, curious.

Forgotten lore? No, the lore is not forgotten. More than a handful of dedicated Rolls-Royce scholars keep correcting, maintaining, refining and adding to the copious record. While the definitive scholarly treatment of the cars of the Maharajahs (and not just their Rolls-Royces) is still not written, Baig could with little effort have dug deeper and either written more or made more of an effort to at least reflect the current state of the research. For instance, he describes company cofounder Frederick Henry Royce as “dissatisfied with his new car—a second-hand French Decauville [who] decided he could build a better car.” This used to be the common take on the story but for some years now has been revised in light of newer findings.

A careful reader might easily conclude that Baig used only one or two sources for his research and did not have the inclination to have his work vetted by qualified Rolls-Royce scholars. Aside from the car-specific lack of depth, the historically minded reader will naturally bristle at the complete absence of any commentary pertaining to the Raj and the British occupation of India, a history not without horror and injustice. And what of the lore of extreme, and perhaps frivolous wealth on the back of poverty and deprivation of lesser mortals? But, again, this type of book is clearly not intended for such an audience—it is “just” a collection of old postcards!

The U-2 Spyplane: Toward the Unknown, A New History of the Early Years »
« Automotive Climate Control: 116 Years of Progress