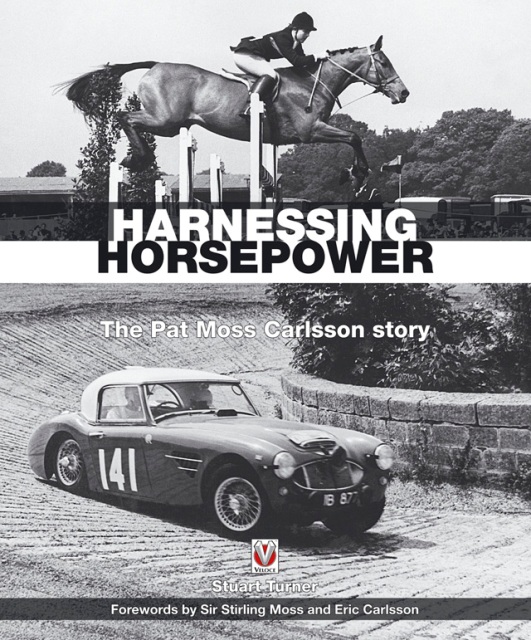 “. . . I’d better make a confession. Despite what I said way back in the Introduction, I did try to prod people into being critical, because with Pat’s searing honesty, I knew she wouldn’t have wanted a whitewash. But I failed. And I failed, quite simply, because nobody had a bad word to say about her.”

The reference to horsepower in the title is more apt than the uninitiated might think because this most successful female auto rally driver of all time was also so accomplished a horsewoman that she was called on to be a member of the British Show-Jumping team.

A five-time European Ladies’ Rally Champion, who used to dismiss cars as “smelly, oily things,” Moss Carlsson (1934–2008) had a sporting spirit and competitive bend from early on, what with parents who raced competitively at the amateur level and an older brother who would go on to make his name in F1—that would be Stirling, if it’s not already obvious. Later in life she would marry Swedish rally driver Erik Carlsson (“Mr. Saab”, because of his PR work for that firm) and continue rallying with him. Even their daughter, Suzy, would become a successful show jumper.

Lest anyone chalks this off to a “speed gene,” consider instead the effect of what author Turner describes as a “high energy level” family environment. Family values, conditioning/lifestyle, and shared interests are the seeds from which would spring the sort of mental discipline, work ethic, and courage that are at the root of any attempt at excellence. He specifically credits both Moss’ early experience with horses—she had her first by the age of 4—with developing a sense of balance and being in synch with the “mount” that would later translate into superior car control.

The release of this book was originally slated for 2010, which would have been the 50th anniversary of Moss Carlsson’s win of the Liège-Rome-Liège rally. Her outright win was not only the first one for an all-female team but also for a British car and crew. Turner, who wrote this book at the invitation of her brother and her husband (both wrote the Foreword), was there for much of Pat’s life as her navigator, co-driver and team manager and also as a family friend. Which also means he knew her well enough to write the book, as Stirling whished, as “a memory, not a memorial.” That same closeness, however, is at odds with the very detachment a biographer is supposed to bring to his subject. Turner is fully mindful of this predicament but argues that Pat was such an unfailingly honest, no-nonsense person that her own mental recall and also the input into this book of so many of her peers kept him on the straight and narrow.

The book is written in a highly conversational style (“Where was I? Yes, the Alpine.”) and one can only wonder if the reason the type is set full measure instead of in columns is to give it the flavor of a journal. In chronological order the biography describes her parents and brother, explores her relationship with horses with all the attending character- and skill-forming consequences, the transition from horses to cars, and then, for the bulk of the book, wends its way through her professional career as a private and works rally driver. (She never much took to racecars but did attend the Cooper racing school at Brands Hatch.) Pat thought of Turner as “a funny man”—as both she and her brother were as well—and a sense of levity is never far off, despite the many and often hair-raising trials and tribulations.

Lots of photos and some newspaper clippings paint a thorough picture. A closing chapter presents stats of the international events in which Moss Carlson participated 1955–1974. Just look at the names of her co-drivers, especially the women, and you’ll see how many more biographies beg to be written! Good Index.

Given Turner’s lifelong involvement with motorsports both on the driving and the management side (he is currently Chief Executive of the Motorsport Safety Fund and in 2009 received the Prince Michael Award of Merit for services to British motorsport) and his personal involvement with many of the events he covers here, this book is as “intimate” as it is knowledgeable. For Pat’s own take read her 1967 book The Story So Far, which followed the 1965 book The Art and Technique of Driving she had co-written with her husband.