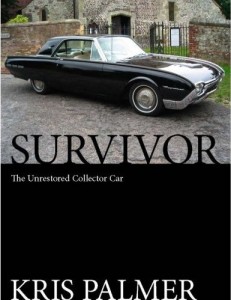 Yes, “it’s original only once.” But when is fading paint hallowed patina and when is it ugly “car acne”? What is the dividing line between benign neglect and being just cheap? Is a Bugatti more deserving of restoration than a bread and butter first-generation Honda Accord? If you replaced Honda with NSU Prince, would you feel differently? Or is it the other way around—should the Bugatti, oozing history as prodigiously as motor oil, be left untouched as a testament to its surely unique history? What state should something be restored to—the way it was originally built, the way an in/famous owner used it, a movie appearance, a crime?

“Wherever the machines that make our dreams real, none has escaped Time’s corruptive hand. As hard as we strive to mine the elements and shape them to our will, nature’s forces work just as hard to break them down and return them to the earth.”

Think of an utterly boring 1963 Pontiac Bonneville ambulance. Painted drab military grey. One of 15 used by the military out of a batch of 69. Unrestored. Still has its U.S. Navy data plate. But—it carried U.S. President John F. Kennedy’s casket after his assassination. And it is coming up for auction (Jan. 2011). If you bought it, would you restore it? To what form?

All of a sudden what looked like a simple matter has turned into The Great Philosophical Issue of the Day. This book won’t help solve it but it will provide a look at the bigger picture and it does present 12 case studies, both of cars and owners, to illustrate the many facets of a very real dilemma. The reader who consults this book out of more than mere idle curiosity, with a real need to answer questions, will find it wanting—not because author Parker hasn’t tried hard enough to reign in the topic but because, in the end, there is no universal answer to be had. The Foreword is written by Tom Cotter, who more than most people has tried to connect the dots in his own four books on different aspects of this issue, but even he offers only annoying vagueness as to the point of demarcation at which the merits of restoration are superseded by the mandate for preservation. In his case it’s an original Cobra whose non-maintenance items he proudly leaves unrestored because “original Cobra technicians” once touched them. That’s sort of like never washing your face again after —— (enter name of favorite movie star here) kissed you on the cheek. Likewise, he leaves his 1939 Ford woody alone because it makes him feel like he’s “shaking hands with Henry Ford himself.” These musings do not help, except in illustrating that there are no simple answers!

In Part 1 Palmer presents different perspectives on when, if, and what to restore. He offers James Dean’s Porsche Spyder, the famous ex-Futura that Kustom King George Barris turned into the famous Batmobile, and the drowned Chrysler Norseman as brainteasers. You may see answers forming in your head only to see the balloon pop when they don’t—cannot possibly—apply to off-the-peg MGAs, Camaros, Vegas (Vegas??) etc.

Part 2 presents the case studies, covering a wide spectrum from an ex-celebrity owned Jaguar SS 100 to a 1989 Mustang GT. All the stories are interesting and Parker writes with wit and sympathy and without hiding the struggle he himself has with distilling the essence of the problem into a recipe. The book end with the last case study; no postscript or parting thoughts, so we will borrow some from the Introduction: “These are not the last words on a well trodden subject but early thoughts on a class of vehicles likely to grow in excitement and value for many years to come.”

Don’t read this book for the answers but for the questions it raises. A separate tome tackles the same subject in the motorcycle world.