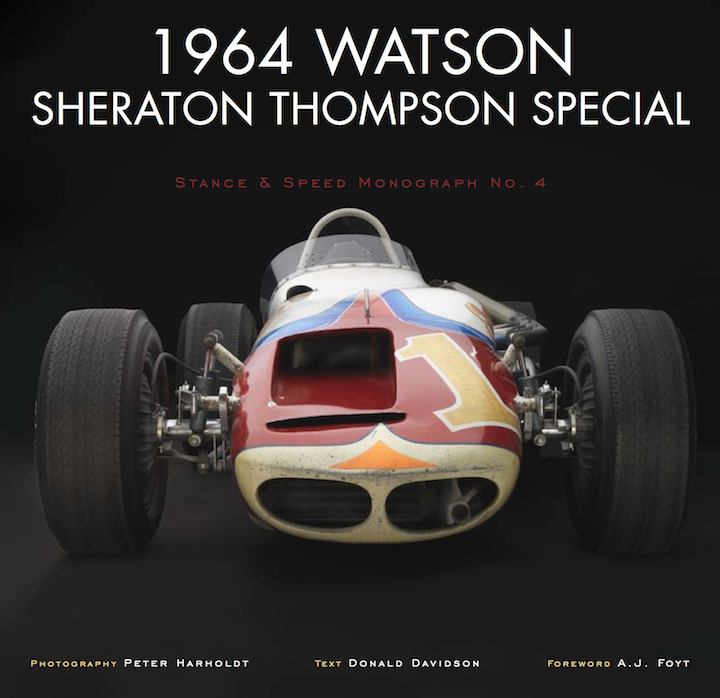 The 48th edition of the International 500 Mile Sweepstakes held at the Indianapolis Motor Speedway on Memorial Day in 1964 was halted after only two laps were completed by the leaders due to a massive crash on the front straight that resulted in the death of two drivers, Eddie Sachs and Dave MacDonald, and injuries to several others. It was the first time in the history of the event that the race had been halted prior to the finish due to a factor other than weather; it was also the first time the race was resumed after a stoppage. The winning car was driven by A.J. Foyt, Jr.—the Sheraton Thompson Special, an A.J. Watson-built chassis powered by a Meyer-Drake Offenhauser engine. It is this racing machine that is the subject of this short offering, the fourth of currently five on notable racing cars in this mall Minnesota publisher’s Monograph Series.

The Sheraton Thompson Special was driven by Foyt on six occasions, the last being the 200-mile event held in September 1964 at the one-mile track in Trenton, New Jersey, just a few months after its victory at Indianapolis. It was, ironically, the only time that Foyt did not win with the car, retiring from the race with clutch problems. (Foyt wrote the Foreword to this book.) After the Trenton race, the car was repaired and then stored in a warehouse in Indianapolis for almost two years. In the summer of 1966, the car was donated to the Indianapolis Motor Speedway Museum, the car much as it was while racing during the 1964 season.

The superb photographs of the Sheraton Thompson Special are printed on high-quality, glossy paper, allowing the patina of the car to be clearly seen and, yes, even sensed. That the car is still as it was when given to the IMS Museum is little short of a miracle, given that such machines are often either donated in extensively restored condition or later restored by the museum staff. Fortunately, this is an exception to that practice.

If the photographs are excellent, then the narrative on the car and its history written by noted automotive historian and Indianapolis expert Donald Davidson (he is the Speedway’s official historian) is its equal. In a relatively few pages, Davidson sketches out the context in which the car was created and campaigned, creating a narrative that is informative, interesting, modest, and worthy of subject. A masterpiece of brevity and storytelling, as one would expect of such an exceptional person.

I will admit to initially having qualms regarding the book: I find myself not necessary very enthralled with photo essays of former racing machinery in their current settings. Something always seems lacking to me, even if the photographs themselves might be very well composed and professional to the nth degree. The difference, one might suggest between experiencing an animal in the wild and caged in a zoo: to me there is a loss of vitality and, well, personality, of the car seen in its true element and then as an object from the past. 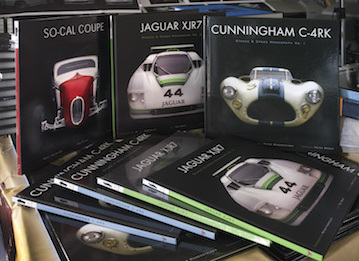 In this case, it was the quality of Davidson’s writing that tipped the balance. His words combined with Peter Harholdt’s photographs make this an excellent addition to the automotive bookshelf.

All five titles in this series are available from the publisher as a specially priced bundle for $79.95.