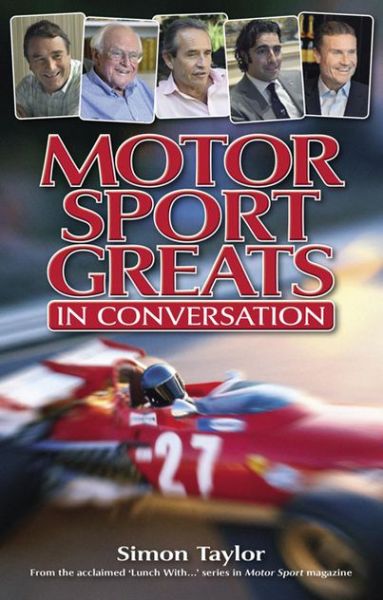 What a deceptively simple idea: Invite someone to lunch, have a chat with that person during the meal, and then simply write it up for the readers of Motor Sport. As is usually the case with things that seem simple, this sort of endeavor is anything but. This makes what Simon Taylor does with the long-standing “Lunch With . . .” series in Motor Sport magazine so interesting and remarkable. Still going strong since its beginning with the June 2006 issue—the first to have lunch with Taylor was Max Mosley—the monthly feature has become one of the mainstays of the magazine, the series now pushing towards the century mark.

When approached by his editor with the idea for doing a series of interviews with people involved in the motor racing scene using lunch as the means for facilitating the discussion, Taylor asked to be freed from the usual constraints of the all too short 800–1,200 word feature (approximately the length of this review). Instead he required up to 6,000 words for the interviews. Needless to say, this was not a request taken very lightly. To his credit, the then-editor of Motor Sport, Marcus Simmons, agreed to Taylor’s proposal, and the current editor, Damian Smith, continues to honor it.

For this book Taylor has selected two dozen of the nearly 80 lunch conversations he had. The interviews are provided in alphabetical order, beginning with Chris Amon (whose lunch interview with Taylor appeared in the March 2008 issue) and ending with the late Tom Wheatcroft (the May 2007 issue). In between are lunchtime conversations with Alan Jones, Brian Redman, Dan Gurney, Keke Rosberg, and Roger Penske, the latter not known for freely indulging such impositions on his time (as a concession, it was breakfast, not lunch, in his case). There is also an interesting lunchtime visit with Stirling Moss—someone who rarely eats lunch but made time for Taylor, their meal taking place around the corner at a spot popular with the taxi drivers.

There is, thankfully, no set formula or template or routine for the lunches. The subject being interviewed gets to select the venue—and Taylor shows up, even if it means flying to New Zealand for lunch with Chris Amon (who in turn drove three hours each way to sit down with Taylor over soup and salad).

Having followed the “Lunch With . . .” series in the magazine from the beginning, I have difficulty imagining anyone else managing to not only succeed in making the conversations interesting and informative but also each one different and unique. This is to the great credit of Simon Taylor, one of the more, shall I say, cerebral among the motor journalists in recent decades. Needless to say, I am often green with envy when I take a step back and look at Taylor’s writing style. Although I had already read each of the lunchtime conversations, I found myself reading them again and, yes, enjoying them again. Simon Taylor and the late film critic Roger Ebert are among the best examples I know of people who have that gift of making whatever they write worth taking the time to read, often for just the simple pleasure of savoring the words themselves.

That Motor Sport Greats in Conversation manages to take what could be a routine, boring premise and instead turns it into something very special makes me look forward to a second volume of these conversations. Until I sat down and read them again, I will admit that I was inclined to think that this was not a book that I would want to read, much less recommend very highly. Once I starting reading, however, it became a different matter.

Simon, please have lunch with Doug Nye or Graham Gauld or . . .!