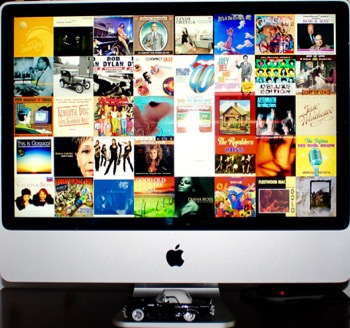 Although he thought that no trace remained, his heart pounded with strange affection when he heard any songs of that age, no matter how trite the lyrics or the tunes.

(And now, as they say, something completely different . . . )

What follows is a cursory review of my music collection. Rather than list the items in an orderly manner, alphabetically, one after the other, I will allude as necessary to that song, that album, that tape, that CD, that download, that stream to make a point.

For example, I have in my hand a four-track reel-to-reel tape of The In Crowd by The Ramsey Lewis Trio. The box is about the size of those old boxes that held multiple-disc 45 RPM albums. For you car junkies out there, the cover shows an urban night scene, folks obviously out to party ‘til sunrise, and in the forefront sits an ebony 1965 75 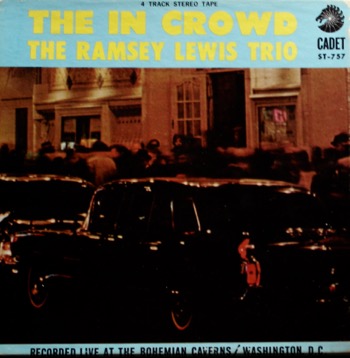 Series Cadillac, the big limousine chassis, a semi-hand-built automobile, less than 1000 made in 1965. And the cherry-on-the-sundae, even beyond the fact that this is a live set, May 13, 14, 15, 1965, recorded at the Bohemian Caverns, a historic jazz club in our nation’s capitol, the cherry is that the tape is on the Cadet Label (Cadet ST-757), Cadet being a subsidiary of the famed Chess operations (Muddy Waters, Chuck Berry) down on “2120 Michigan Avenue”, Chicago. And, yes, I do have that Rolling Stones’ song in the collection on CD and formerly (many collectors de-accesses and cull periodically) on vinyl—alas, I had sold the majority of my vinyl somewhere back in the 1990s. Of roughly the 700 LPs and 1500 45s, I retained roughly 70 LPs and a box full of 45s, many with picture sleeves. The box, by the way, is one of those cute containers from the 1950s, light blue body, black clasped and Lucite-handled lid and a Capitol Records logo to boot. Oh, yes, I must confess, lacking, say, an Ampex AG-445B, never have I listened to The In Crowd. A pop-music cultural artifact, one among many, very many—nearly uncountable, uncomfortable many.

And even if I tried to list the collection “in an orderly manner,” the project would take decades to complete—especially as the collection grows weekly if not daily, a download here (my online account, my Amazon Music Library, a rather new addition to the collection, lists over 1700 digital-music items); there a new CDs delivered to my door. An exercise in futility: The list could never reach completion. Perhaps after I’m dead? I’ll be 69 this September upcoming.

So what have I been listening to these last several days? On CD: Beach Boys’ Party! Uncovered And Unplugged, 2016, Capitol B0023853-2: For hardcore fans, a wonderful addition to the original 1965 Beach Boys’ Party LP, with studio chatter and songs not released until now, Bob Dylan’s She Belongs To Me for one. English Heart, Ronnie Spector, 2016, Savoy Label Group, B01BOKDNDU: I have been in love with Ms. Spector since I was 16. This album is new. Hearing her do “Because” (Dave Clark Five) and “Tell Her No” (The Zombies) warmed my heart. For something somewhat contemporary, I listen to Justin Timberlake’s Justified, B007V4QKRA, Jive Records, 2002. Coming from NSYNC, a boy band, Timberlake creates music surprisingly warm, ingenuously 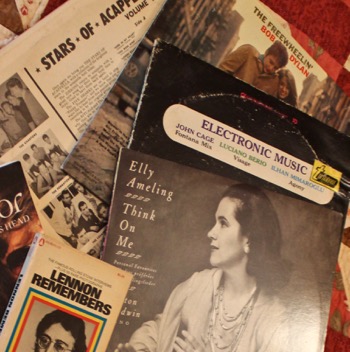 sexy and persuasively complex. From a different world, there is Schubert Lieder, Elly Ameling and Rudolf Jansen, Phillips 416 294-2, 1986: Her voice is angelic; she is among the very best classical singers.

The CD collection itself seems endless, with collections within collections, revealing themselves like matryoshka dolls: The Beach Boys, The Beatles (including the 1993 release of The Quarrymen—The Dawn of Modern Rock, PILZ 449830-2, that contains the absolutely earliest Beatles material), Miles Davis and The Rolling Stones. This last contains solo albums by Bill Wyman, who has a predilection for late 1940s R&B, and Keith Richards. The Richards collection includes a copy of Wingless Angels Volume I and II, Mindless Records, B003VL3OUS, Richards’ foray into Jamaican Nyabinghi music, haunting, ancient sounds. There too is a subgroup of classic electronic music, John Cage, Ilhan Mimaroglu, Luigi Nono, Bebe Barron, Louis Barron and Joseph Byrd. 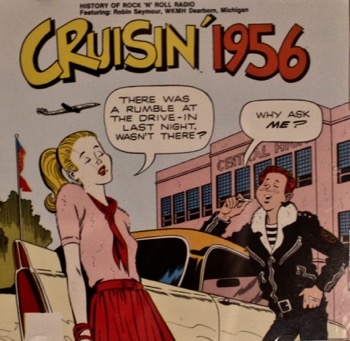 Another collection-within-the-collection is The Cruisin’ Series. I had often wantonly desired the original LPs, but I make do with the CDs. The LP 12” x 12” sleeves (smaller on the CDs) tell the story, through clever cartoons, one panel per LP, of Peg and Eddie, from 1955 through 1970. It begins in middle school: Eddie is gazing fondly at a new Thunderbird as Peg wishes she could merit such attention. Then it’s rumbles, summer jobs, and drive-in movies. By 1963 Eddie is involved in coffee-houses and the revolution. The Beatles and Viet Nam intervene. The couple break up but reunite in 1968 at an antiwar rally. But, towards the end, it’s corporate America for Eddie. In 1970, in the final panel, he’s on the golf course busy with his boss, and Peg—well, she’s all set to take another “golf lesson” with Mike. Each disc fabricated, from air checks and archived tapes, an AM radio show of a celebrated DJ for each given year. For 1960 it’s Dick Biondi, WKBW Buffalo, and for 1967 it’s Dr. Don Rose, WQXI, Atlanta. The songs are those found on endless anthologies, “School Days,” “At The Hop,” “The Big Hurt,” “Wooly Bully,” “Happy Together,” Talk to Me” by Sunny and the Sunglows. Few big names appear: No Sinatra, no Elvis, no Beatles, no Stones. You’ve heard most of these songs a thousand times already, but listening to them here makes a few more listenings worthwhile, as the tunes are presented in their fondly remembered original context. In between the songs, creating a non-stop, uninterrupted flow, are vintage commercials, silly noise punctuations (think penny-whistles and ahooga horns) and DJ patter. The series originally was created by Increase Records, but as the series progressed other companies released various editions, KTEL among them.

45 RPM: “(Let’s Dance) The Screw—Part One” by The Crystals, Philles Records, 111, 1963. The legend is that when Phil Spector’s partner Lester Sill (Phil-Les records, get it?) broke away from the partnership (it is said that Sill just couldn’t hack working with a madman any longer), part of the divorce contract stipulated that he would receive the royalties from The Crystals’ next single. Some Spector scholars refute this and believe 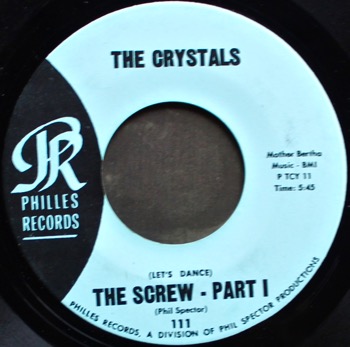 that the record was made by Spector as an annoying, insulting gesture, an audio finger raised. In front of that signature wall-of-sound, those layers of pianos, guitars, bass and great Crystals background vocals, all bleeding into each others’ microphones to produce that revered trembling, all-but-impenetrable thunder, Spector intones, in a voice of gravel, ennui and contempt, “Dance the screw.” Some sources say that it is Spector’s lawyer “singing,” but it sure sounds like Phil to me. A two-pronged confession: My turntable has not been set up for many years, and although I do own a 45 RPM copy, I have been listening to “Screw” either on a bootleg CD or on YouTube. Also, my copy is counterfeit, a near-perfect rendering of the Philles label, but in blue; the originals, only a handful pressed, have a white promotional label. Mint copies are selling for around $4000.

LPs: As said, my turntable is not in use, so, except for cuts I had recorded on cassettes, I haven’t really heard an LP record in my house for many moons. But I have kept 70 LPs, most in good condition, and perhaps one day I will find time to unearth the Technics from the attic and plug it in once more.

Concerning the above media, it is wise to distinguish between listenabilty and collectability. 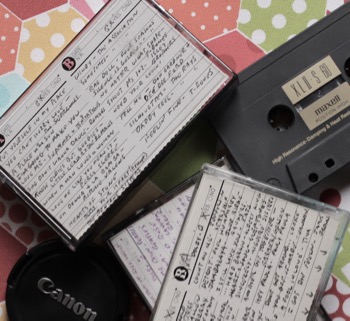 Cassette tapes: When I purchased new my Honda Civic S in 2003, I had to pay extra to have a tape deck installed, and I had a hard time tracking down a small amplifier/receiver with a tape deck for my bedroom, a Sharp CD-DH 790. Such players are becoming obsolete. And, luckily, my other deck, a Rotel RD-870 (1986), jacked-in to my Harman Kardon HK-3500 (1991), still functions perfectly. Listening to cassette mixes made long ago, usually on Maxell XL-II 90 tapes, transferred from 45s and/or LPs, tenders a sound all but forgotten, one heavily steeped in nostalgia. The needle-drop introduces the performance, and the instruments and the vocals may be accompanied by that skittering rasp of surface noise. This is especially true for those 45s that were bought second-hand. Over repeated listenings you find that you have absorbed the individual pattern of surface noise, clicks, skips and pops, and this individual copy of the 45 becomes essentially a one-off variant, a sort of prehistoric re-mix. When hearing a song from a CD that I had heard repeatedly over decades from one of these tapes, my mind fills in the old background noise—waiting for a particular skip for example—and it is as if I am hearing the song simultaneously in two different formats. And as I listen to such material through the Rotel, it is as close as I now can get to the fabled warmth and clarity of genuine vinyl.

Consider a highlight of such a cassette: “Heart and Soul” by the Cleftones, “Space Station” by Art Farmer and Benny Golson, “Stay” by Maurice Williams and The Zodiacs, “Detroit” by Paul Humphrey, “Rambunctious” by Harold Better, “Count on Me” by The Jefferson Starship and, among the 41 selections, a beautifully battered disc of Sam Cooke singing “Don’t Get Around Much Anymore.” Each cut from this selection, eclectic and spanning many years, manifests a rich history of American popular music. The shelf for these recording is three-deep.

Streaming: Along with Debussy’s La Mer, I have lately been streaming Janelle Monáe’s Electric Lady. Monáe is relatively new on the scene, showing that I am not entirely immersed in the songs of my youth. Her R&B shaded with electronics, DJ announcements, hip-hop and a tough, sophisticated humor offer excellent contemporary listening. Keep in mind that hip-hop and rap are over 30 years old now. Admittedly, very little from these genres have made it into The Collection, but I do enjoy streaming the Digable Planets’ Reachin’ (A New Refutation Of Time and Space),1993. Because of my conservative sensibilities, I like The Planets because they shy away from the misogynist, cop-baiting, and violent themes often found in this music—and they sample Miles Davis. Then there are the strange, evocative 1930s recordings of Geeshie Wiley, lifted from old 78 RPMs, and no matter the filters and electronic diddling, the surface noise from the originals linger. I also regularly buy digital songs from Amazon. I can listen to these from any computer, and I can download them to my Apple iTunes account. Along with the Amazon downloads, I have also downloaded to iTunes music from the CD collection, making over 1200 songs available through this medium. And using iTunes, I will burn CDs of my playlists to play on the Sharp (using the CD function) or my Pioneer ELITE PD-M59, circa 2001, a unit incorporating a 6-pack CD cartridge, another device on the verge of extinction. 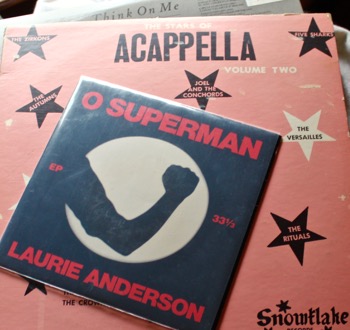 Music lovers today can go around in endless circles. I like my music varied, and I like to toy with the nuances of the various audio media—but, so far at least, I have stayed away from Sirius Radio. Contemplate the sheer number of songs available there for the asking. The sheer number of songs available from Sirius, streaming, CDs, Cassettes, LPs, and 45s, reel-to-reel, the whole maghilla, make the mind stagger but make the ears smile.