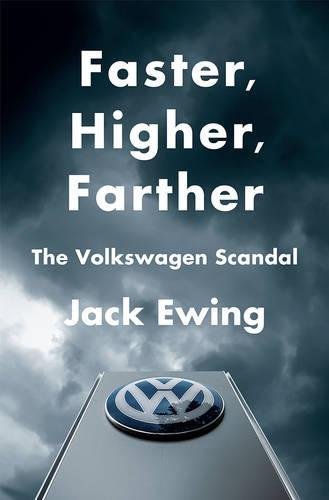 Ewing portrays an outstanding reflection of the VW culture that led to what has come to be known as “Dieselgate” (or “Emissionsgate”). He is the Frankfurt-based business and economics correspondent for The New York Times since 2010, having been in Germany from 1994 and served as a Business Week correspondent.

After an initial history of the birth of the company and the role of Ferdinand Porsche, the author digs deep into the family dynamics, particularly the background of grandson Ferdinand Piëch who would rise to the top of the Volkswagen Group. The family connection did not entitle him to an executive role at VW and after 1970 not even at Porsche following several family feuds. So he started as a department head at Audi. Pure engineering intellect, intimidation, and fearlessness to take bold moves ensured his rise to the top.

Also examined in detail is the curiosity of US graduate students operating on a shoestring grant at West Virginia University. Puzzled by the discrepancy between their real-world emission readings and VW’s data they approached the California Air Resource Board and eventually the EPA. The histories of these regulatory boards are provided as background. The $1 billion penalty imposed on the major truck engine manufacturers in 1998 is covered as an example of what happens when you cheat on emission standards but VW was obviously not paying attention.

The author delves into José Ignacio López de Arriortúa, the ex-GM executive who defected to VW with crate loads of GM forward planning documents and many of his handpicked disciples. Also exposed were the use of prostitutes for a variety of roles such as softening up trade union leaders and their influence over the Supervisory Board. Add in the intimidation faced by many senior staff members to deliver or find a new job, and you have a rather clear appreciation how the lack of any moral compass could easily lead to software cheating to pass regulatory emission tests.

The readers learn of the investment manipulations, through the use of share purchase options, which enabled Porsche to gain a significant majority ownership of VW in 2008. Once again the author provides full details of these maneuvers along with the challenging lawsuits and family and executive skirmishes.

Martin Winterkorn, CEO of VW when the scandal erupted, is scrutinized as Piëch’s handpicked successor along with the bumbling blunders in crisis management during his watch, from stalling and frustrating the regulators, to simply failing to understand the gravity of the situation.

The only possible omission is that the author did not pose the question how could the top executives not notice that no patent was claimed for the solution that gave the VW diesel access to the lucrative US market. It is their duty to protect intellectual property rights and a competitive advantage. Likewise, besides a short quote from Bob Lutz, the competitors do not appear to have been queried whether they had attempted to reverse-engineer the “formula” or noticed a lack of any patent application.

Four years have passed since this book was published, during which time Piëch has died but Winterkorn remains free although he settled a civil case against him brought on by Volkswagen itself in June 2021. Amongst senior executives, Wolfgang Hatz, chief development engineer of Audi and Porsche, has faced jail time. Former Audi head Rupert Stadler has also been behind bars but that was for evidence tampering. Along with Winterkorn both Hatz and Stadler have settled claims against them by VW.

Ewing strikes the perfect balance between giving the demanding reader, particularly academic researchers, all the details needed without getting into the weeds. Seldom has this reviewer been so impressed and informed by such an engaging book on automotive history. In years to come this scandal will be recognized as a pivotal point in the history of VW and this book perfectly documents events that future historians will be seeking. This is a must-read.

This review appears courtesy of the SAH in whose May / June 2021 Journal #310 it was first printed in substantially similar form.

Posted Under: Automobiles, German | Author: Other | No comments yet