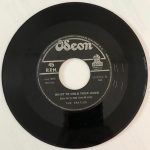 A serious, thoughtful biography of a jazz saxophonist by a jazz critic and musician who knew his subject personally. This spells real insight, and, in fact, this book ought to be a model to all biographers.

At the best of times, Rolling Stone magazine was, and once more is, so much more than merely a chronicle of the music industry or popular culture. It showcased heavy-hitting political reporting and writers who would become literary luminaries. This masterful biography offers a look behind the curtain.

Still can’t enough of Beatles material? This book shows how important Martin’s contributions and collaborations were to the Beatles’ recorded music, and it shows his profound concern for both the music and for the band.

Speedreaders is often unique in the material we review—and proud of it. Here is a music catalogue that may periodically come to your house. But we sometimes do more than a mere review; this essay is both informational and illuminating.

The title comes from a sticker that was affixed by their original or early subsequent owner to some 78 rpm records eventually acquired by hardcore collectors: Do not sell at any price. This becomes a ready symbol for the fervor and obsession of the collectors found in the book.

Although most music consumers today stream their favorites, there has been an uptick in the interest in vinyl. There too is a tremendous backlog of out-of-print vinyl, and not everything, believe it or not, is available on CD or streaming. This book takes a long look at this phenomenon.

Enough about Brian Wilson already! I am a Beach Boy too, a founding member! Attention must be paid! I am a wonderful person! Look at Me, Ma!

Now that Bob Dylan has won the Nobel Prize for Literature, the fans and enthusiasts portrayed in this book, many of them obsessive, are vindicated. David Kinney describes these folks with respect and sympathy.

John Lennon, 1966: “We’re more popular than Jesus now; I don’t know which will go first—rock ‘n’ roll or Christianity.” Fifty years later and considering the scope of this book, it just might go either way. Even if you don’t collect/trade Beatles records, you can still enjoy the book.