Ferrari: Stories from Those Who Lived the Legend 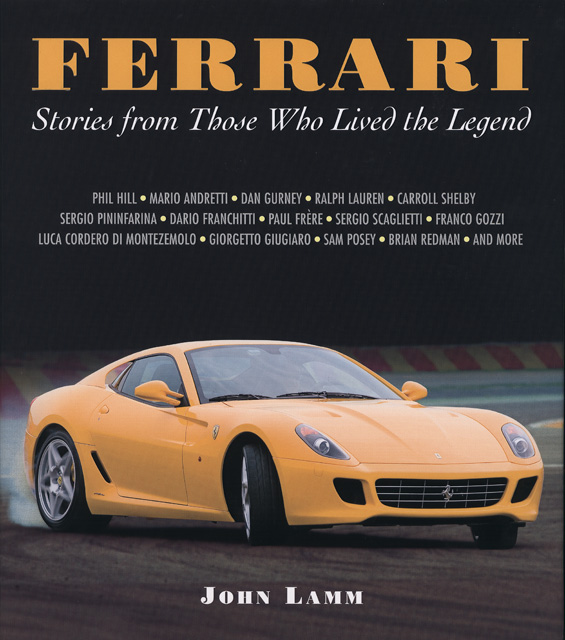 The subtitle says exactly what this book is about. Ponder it a moment. What expectations do these words generate? If you’re looking for a subjective, decidedly Ferrari Rules! take on the world, this is the book. No stats, specs, data, tables or even cohesive story arc here (“And on the third day God/Enzo begat…”).

Upon first picking up the book one cannot fail to be impressed by its sheer size and weight, the glorious photos and the excellent paper.

It starts innocent enough, with a joke about Ronald Reagan, the Pope, and Enzo. And then, right away, there’s the first test of the reader’s willingness to stick with it. Especially those readers for whom not everything revolves around the Red Planet. Lamm asks, “Ever recall anyone wanting to be buried in a Ford, Bugatti, Honda, or Lotus?” Why, yes, we do. A book could be written about just that! I’d be in it—and not with a Ferrari. Why go there? But, the book can grow on you—if you heed the advice on the second page: partake of it in small bites; lest [a] the relentless rah-rah pep rally causes irreconcilable conflicts with what one knows of proper automotive history or [b] the sheer breadth and width—even if not the depth—has one disoriented. A few examples to illustrate the latter: Enzo’s British secretary “La Brenda” making pasta and steak for Gilles Villeneuve who is staying at her apartment (sleeping in her bed, no less. But not with her in it.); Sam Posey juxtaposing Luigi Chinetti’s firm belief that the factory settings on the cars from Maranello could not be improved upon vs. Penske’s relentless tinkering; or Roberto Vaglietti applying as an 11-year-old boy to Enzo himself for a job (now he runs Ferrari Classiche). Some voices are from the grave, as it were: Klemantaski reminiscing about the perks of trading his seat in Astons for one in Ferraris during two of his five Mille Miglias. An undeniably colorful picture emerges—but the dominant hue is “rosy.”

It’s a bit like a reunion. Everyone has a story to tell. With blessed 20/20 hindsight all the toils and tribulations are forgotten, maybe even forgiven. In a different recent Ferrari book none other than Nick Mason, a serious collector and driver, opens his Foreword by saying: “I think it’s true to say that Ferrari has made plenty of bad cars, but also many great ones.” This is the sort of leavening that makes the dough rise; you won’t find it here. There’s at most a faint whiff of occasional criticism. You’ll have to make it to page 108 to find that the author is not entirely unaware of this because here he writes, about Carroll Shelby—of whom, of all people, one would expect to hear an admission of at least mixed feelings—that “unlike the rest of the people in this book, Shelby wasn’t out to glorify Ferrari.” Informed readers will know what’s what and take it in stride but one worries for the wide-eyed novice who will drink this all in and take it as gospel.

One voice that is missing is that of 7-time F1 World Champion Michael Schumacher. Come to think of it, while the book does encompass road cars, race cars, and concept cars, no one from the modern-era F1 scene was interviewed. Well, there is Luca di Montezemolo but he has been and still is wearing many different hats. Singling him out is relevant inasmuch Lamm divides Ferrari history into an Enzo era and a Montezemolo era. He, and some others, are in fact interviewed several times. Their commentary on different eras offers useful insights into the firm’s place in the world—both in terms of what changes and what doesn’t. (Getting that just right is a key ingredient in what makes the Ferrari cocktail potent.)

The book is divided into eras, beginning with a basic mise en scene in the 1940s and then covering the subsequent decades chapter by chapter in similar manner: first the production cars then race/racing cars and, if applicable, GP-specific commentary. Each commentator takes on one particular, isolated, often anecdotal facet of the story. No clear picture emerges, nor—see paragraphs above—is it meant to. Both the tifosi and the newbie will, however, come away with the impression that Ferrari—the man and the car—was/is something that immeasurably enriched the automotive landscape.

The book has an Index—and if you can dial in your eyeballs to read 4-point type you will discover it to contain most proper names mentioned in the book and all the car models. That the book takes its photography serious is evident in the fact that the credits take pride of place at the front of the book (and, unlike the Index, in regular-size type). They come from a large number of sources but most are Lamm’s. He’s been at it since attending his first race at Elkhart Lake’s Road America in 1960 and been a journalist all his professional life. Several books as well as stints at Motor Trend andRoad & Track magazines and regular contributions to Japan’s Car Graphic, Australia’s Wheels, and France’s Automobiles Classiques have earned him several awards including an International Automotive Media Association lifetime achievement award—which surely means the best is yet to come.

The photos are large, crisp, well reproduced and captioned. For good measure there are the occasional factory brochure or race poster, and Chuck Queener’s less-is-more layouts should not go unmentioned. Even the dust jacket is upscale with its raised lettering and extra beefy paper.

In terms of historical fullness, this book is not meant to be the only Ferrari book you own. Lamm’s reason for doing this one? 1, the world never tires of seeing Ferrari photos and 2, it is a rich and varied story. If books of this nature are what’s missing in your library, do also take a look at Stone/Dal Monte’s The Ferrari Phenomenon.

TSR2 – Britain’s Lost Bomber »
« The Art of the Racing Motorcycle: 100 Years of Designing for Speed