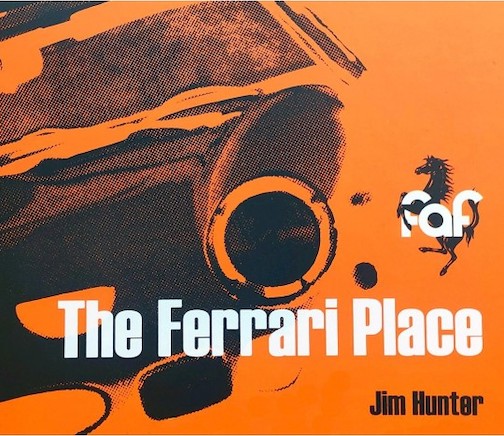 “Along a timeline that almost perfectly bridged the transition from the days of Chinetti to Ferrari North America, there would be few greater examples of enthusiast passion for the marque than the people who were FAF.

FAF, the dealership, never rivaled Hollywood Sports Cars, Harrah’s Modern Classis, Chinetti, etcetcetc, but in an era defined by independent enthusiasm, FAF’s lasting impact was beyond that of a dealership alone.”

The acronym FAF—which stands for Ferrari, Alfa [Romeo], Fiat—on the cover is easy to miss. In fact the whole book is easy to miss as it positions itself very much as an insider affair. Moreover, it exists in only an exceedingly small production run of 330 (numbered) copies, two thirds of which were snapped up within just the first few months. The author several times refers to it as a “first” run which may indicate that another could be contemplated.

The book certainly deserves the attention of more than just Ferrari insiders because it sheds light on the formative period of the Ferrari movement in the US, which, when all is said and done is quite a different animal from other marques and thus speaks to larger sociographic matters. This book is an appreciation by former staff, competitors, customers and enthusiasts and is illustrated with mostly unpublished photos.

A subtitle of sorts on the flyleaf offers a first clue (well, the only clue) to the backstory: “Compiled and expanded from the Ferrari Club of America’s PRANCING HORSE magazine, issues 207, 208, and 209.” Researchers in the future would probably benefit from knowing that that puts it into the year 2018 (the mag is a quarterly publication). Presumably, the readers of a club magazine would be familiar with the outsize role FAF had once played (after about a quarter century in business it was acquired in 1994 by Ferrari Maserati of Atlanta, along with some of its longtime employees) and also recognize many of the names, which probably explains why this book sees no need for photo captions or a clear timeline or other such niceties to ease the non-specialist reader into the subject.

A number of factors make the story unusual. FAF grew from two basically shade tree mechanics in the Atlanta area fiddling with their own cars and sourcing spares for their own needs to a full-blown parts vendor, then repair service, and then dealership. Readers new to the subject need to know that Ferrari’s official importer, Luigi Chinetti in New York, was hardly a universally beloved figure on the US Ferrari scene. He was imperious, kept a tight lid on technical information, monopolized the spare parts market—and didn’t give a hoot about customer appreciation. FAF did all that differently and from the beginning flew the “by enthusiasts for enthusiasts” banner. Their ever-growing parts inventory inevitably led to a printed catalog, not least for the growing number of mail order customers, and in it they freely offered tech/service tips and illustrations, references to alternate parts, buyer’s and market guides, and so much more. Their aptly named Ferrari Owner’s Survival Manual became a sought-after resource, and, as importantly, created a community. The latter took a particularly unusual turn, surely not as an expression of “corporate strategy” but simply basic humanity: if a kid wandered onto the FAF premises—not easy to do considering the out-of-the-way location behind a concrete plant in Tucker, GA—chances were that someone would let the googly-eyed teen slip behind the steering wheel of a car on the showroom floor and dream big. Ask a Ferrari owner who grew up in the Atlanta area in the 1970s and 1980s and don’t be surprised to hear that FAF is where it all started for them!

The author (b. 1961) himself was one of those teens, except he took it a step further: he boldly asked for a job, 16 years old and without a clue. That didn’t come to pass—but there’s a reason his Instagram handle is #ferrarishooter and he became a motorsports enthusiast, photographer, and writer. 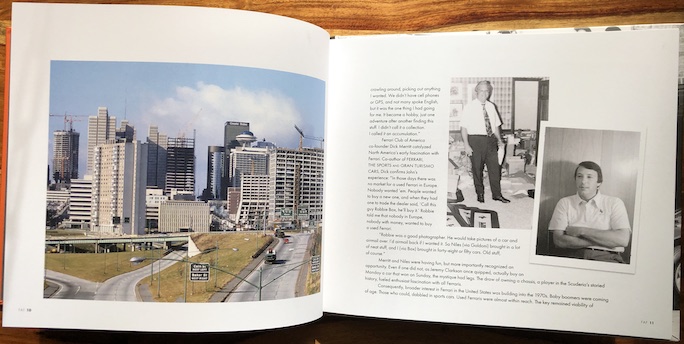 You may be able to suss out on your own what the city on the left is, but even after reading the right-hand page you won’t be sure who the people are. A former FAF VP and General Manager is since 2015 a contributor to “Prancing Horse” magazine where this material first ran and it is odd to think that no one gave any thought to sprinkling a few more details around so as to enlighten readers new to the subject.

If there were to be a second print run one can only hope that it will be a still more expanded version, with more connective tissue and context.

Available only from the author direct [autospheric@gmail.com] or in the US from Auto/Aerobooks, in the UK from Hortons, and in Italy from The Maranello Collection .