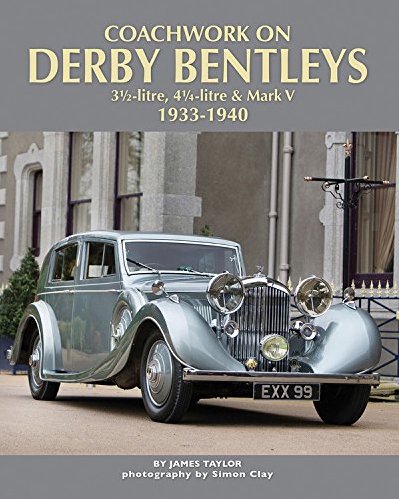 This comprehensive overview of the Derby Bentley’s coachwork emphasizes once again what a successful line this was for the Bentley marque’s new owners, Rolls-Royce Ltd., despite some initial weaknesses in the Derby chassis. With 2411 produced (plus a handful of Mk V models) there was ample scope for variety in coachwork.

This new volume is self-indexing by its alphabetical arrangement of coachbuilders. Potted histories are given for each coachbuilder followed by complete listings of the chassis they clothed and some statistical analysis. Coachwork appreciation is one of the dark arts and requires a bit of scepticism so there’s the occasional misinterpretation of some bodies. For example, the drophead attributed to Thrupp (the coachbuilders when new) on pages 140/41 is in fact a postwar rebody, perhaps by Mead. There could also have been a little more delving into period sources and even some later ones to avoid claims of no known photograph for some cars, for example Connaught, or the lack of chassis number with some images. As for the bodies racer Eddie Hall used on his famous B35AE race car, the all-metal Potts body (not mentioned) rather than the Offord was first used for racing. As the author admits, Hall’s car has caused endless confusion. But these are small niggles in such comprehensive coverage.

The book has 280 modern images, about 40 of them recent professional photography by automotive photographer Simon Clay, and 80 period b/w images (mostly at small size). This makes for a sumptuous mix, especially for coverage of the more stylish cars. However, this can cause some imbalance in our understanding of what the cars were like in period, when new. So many have now been restored and changes made, such as non-period color schemes and glamorized interiors (or worse), making it difficult to know what’s period-correct or not. Still, imagine using mainly modern photography for W.O. Bentleys—you’d gain the impression they were all Le Mans types from new! With the Derby Bentley far more of the original coachwork survives. And this useful book is a welcome reminder of just how attractive most Derby Bentley coachwork was.