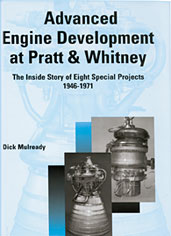 Why is it that some “inside stories” sparkle and others fizz? While generally not a riveting read, all that changes when the liquid hydrogen hits the turbo pump and the fizz turns to fire, roasting NASA. This book really comes alive with genuine passion when author Mulready claims that NASA and Rocketdyne were in bed together, robbing Pratt & Whitney of winning contracts through favoritism, causing huge NASA cost overruns and engine test failures, and delaying the successful development of the Space Shuttle Main Engine.

“It was a time when going to work was fun, with a new challenge arising almost daily. The feeling of loyalty, both upward and downward within our company was palpable. The work was pioneering.”

Mulready (b. 1925) spent almost four decades developing advanced engines at the Research Laboratory and the Pratt & Whitney Aircraft division of United Aircraft Corp. He was senior Pratt & Whitney program manager for that project and so certainly in a position to know. He quotes Richard Bissell, formerly of the CIA, as saying, “I am sorry, but you cannot win. It was already decided in advance. The only reason for the competition was to transfer your [Pratt & Whitney’s] technology to them [Rocketdyne].” Mulready continues: “How did it happen? A conspiracy to take what was ours [Pratt & Whitney] and give it to someone else [Rocketdyne] evidently had been the [NASA] plan from the outset.” As part of the Space Shuttle Main Engine design contest all entrants had agreed to share their technical information with NASA. Pratt & Whitney “bent over backward to tell everything. It also became apparent that although the top brass of NASA in Washington directed the plot from the outset, the Huntsville organization expected that Rocketdyne would be its engine contractor simply because Rocketdyne always had been. Why was that so?”

At the time Pratt & Whitney already had a functional high-pressure cryogenic hydrogen rocket engine operating at their test facilities, but NASA, with “the arrogance of those who had been to the moon” awarded the contract to Rocketdyne. Sam Hoffman, who ran Rocketdyne, had befriended Wernher von Braun right after WW II by inviting him and several of his fellow German rocket engineers, who “felt as if they were little more than prisoners of war” at White Sands, to sunny California, treating them to “an extended visit at his expense. Their gratitude knew no bounds.” As a result, “Rocketdyne became their [NASA’s] engine company.”

While the rest of the book is written clearly and contains all the data one would want to know concerning the other seven engine projects that Mulready and Pratt & Whitney were involved in between 1947 and 1971, it lacks the literary intensity, immediacy, and “fire” that NASA’s rejection of the Space Shuttle Main Engine created in Dick Mulready‘s writing style. The drop-off in focus in other areas of the book makes for lackluster reading, although the engine projects are covered intelligently and are definitely worth reading about from an engineering standpoint.

The book starts off chronologically with Ramjets in 1946, the world’s largest turboprop in the mid 1950s, followed by the liquid hydrogen Suntan engine (hints of a future Aurora power plant here?), the RL10 rocket engine (a liquid hydrogen engine that, “over the last 45 years, has launched most large satellites and space vehicles”), high-pressure rocket engines, the boost glide XLR129 mach 20 engine, XLD-1 gas dynamic laser weapon (600 kilowatts), and the aforementioned space shuttle engine fiasco. All in all, worthy, but not gripping reading. Great for historians of the culture, with lots of between-the-lines hints that can provide conspiracy-oriented aerospace aficionados with contemplative moments.

This 226-page book is composed of a Preface and Acknowledgments, nine Chapters, Appendix A, B and C, a good Index, and a quick About The Author summation. The photos, although grayish, are in focus and fascinating, displaying many innovative ideas and concepts that Pratt & Whitney manufactured as operating prototypes. Beautifully made huge heat exchangers capable of transferring 72 million Btu per hour (enough to heat 700 homes) and clever shape-adjustable stacked disk rocket engine chambers are just a few of the visual treats revealed in the photos. Ever wonder what a rocket engine propellant injector looks like, or seen a cut-away view of a 40,000-rpm, 7,000-psi, cryogenic liquid hydrogen fuel pump? The exotic subject matter definitely makes the photos the stuff of gearhead dreams.

Lost Hot Rods: Remarkable Stories of How They Were Found »
« The Art of Bugatti: Mullin Automotive Museum