From Demolition Derbies to NASCAR 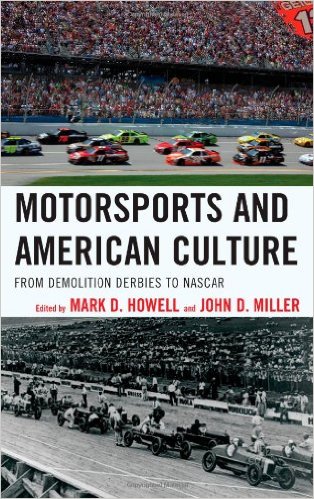 To many people, the term “motorsports” conjures up visions of loud, high-powered, fuel-sucking race cars—perhaps open-wheeled versions such as the ones found in IndyCar or Formula 1, or maybe full-fender stockers à la NASCAR—making left turn after left turn on oval tracks for laps on end, occasionally passing, and sometimes wrecking in the process. Yet as most fans would attest, motorsports in all its forms goes far beyond this initial impression. Motorsports and its multiple variations have influenced American history and culture in myriad ways, and Motorsports and American Culture chronicles this influence in critical and entertaining fashion.
The book seeks to answer the questions: “Why study motorsports? Why watch motorsports?” In the effort to answer these questions, the book employs an interdisciplinary approach among its contributors, with the authors of each individual chapter coming from various academic backgrounds, such as history, anthropology, art, library science, journalism, rhetoric and writing, sociology, and American studies. This approach allows the book to serve as, in the words of the editors, “a broad survey of motorsports from a variety of interpretive lenses.”

The book is divided thematically into four sections of three chapters each. Topics include motorsports relations to fans and followers, the role of community identity in motorsports, gender roles in motorsports, and the spectacle that accompanies technical accomplishments. The chapters address a wide variety of activities, from speed demonstrations and demolition derbies at county fairs; to historical racers such as Barney Oldfield and Louise Smith and their subsequent impact on American culture; to women’s involvement in drag racing; to the relationships between on-track racing and the on-street phenomenon of hot rodding. All entries are well-written and eminently readable, free from the dry, detached style that is seemingly so endemic in much academic writing. The editors are to be commended for their selections of writers and topics, as well as for creating a unified voice across the twelve chapters.

The selections have an emphasis on more “home grown” motorsports, such as NASCAR, hot rodding, and demolition derbies. Coverage of open-wheeled racing series such as IndyCar or F1 is more limited. Perhaps this is not surprising, given the 1990s fissure in open-wheeled racing involving CART and IndyCar, as well as F1’s emphasis on overseas venues and less-than-successful efforts to reestablish a presence in the United States in recent years.

For those whose background and knowledge of American motorsports is limited, Motorsports and American Culture serves as an excellent introduction to the role of motorsports in American culture, with thorough research notes and bibliography provided. Even those who are well versed in the subject will find the book an enjoyable read. The editors of the book hope that the work will “[aim] to encourage and will hopefully be the inspiration for new queries and answers.” The book demonstrates that this is a rich field for research, proving that motorsports do indeed encompass more than left turns, occasional passing, and wrecks.

This review appears courtesy of the SAH in whose Journal #269 it was first printed.