Including Phantom V and VI, Bentley S and Continental 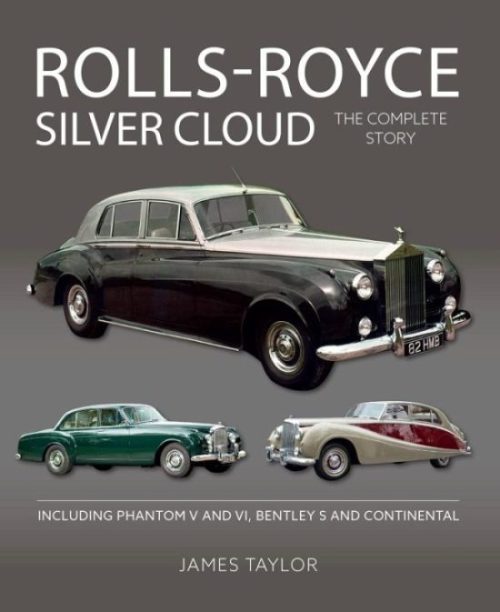 “Many years on, I still believe the Silver Cloud family represents a pinnacle for the Rolls-Royce  company. The cars all had, and still have, a very special presence, and the standard saloons have an unsurpassed elegance and rightness of line. The special-bodied cars, meanwhile, are reminders of an age when the skill of the best coachbuilders was something deserving of universal admiration.”

To underscore how important it is for Rolls-Royce to first and foremost please the customer consider that the new model was unveiled in 1955 to customers and prospects before it was shown to the press. It also illustrates how sure the company was that the new car possessed all the right styling cues and creature comforts that a clientele more interested in the noise of the dashboard clock (that famous Ogilvy ad!) than the mundane performance numbers the press would hone in on (and who would have thought that it would be the media that would complain that their tester had no starting handle—on a 1956 car!).

In fact, the design was so right, and became so iconic, that the makers of the “new” Rolls-Royce (BMW) of the modern era sought the Silver Cloud designer’s blessings when they chiseled away at their 2003 Rolls-Royce Phantom. Espying a Silver Cloud/Bentley S on the road nowadays is even in big cities no longer a daily occurrence so a book is just the ticket to showcase the car to new enthusiasts. 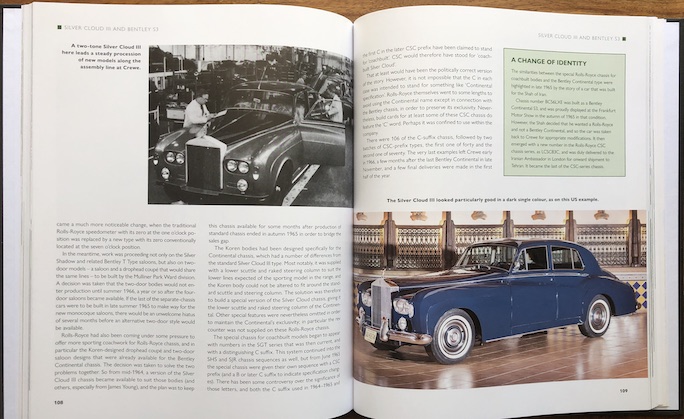 And new enthusiasts are surely this book’s intended audience. For one, the text is light on such minutia as chassis numbers that are a must-have in serious RR books but will not yet be meaningful to new readers. (And the author is obviously mindful of that because his other, more specialized RR/B books do have heaps of them). For another, the author is the first to say that he “doubts this book will bring any new knowledge to print,” which would also not yet be meaningful to new readers. What is meaningful is that what the book does contain be accurate and unambiguous and up to date, and it is all that, conveniently gathering the core facts in one book. 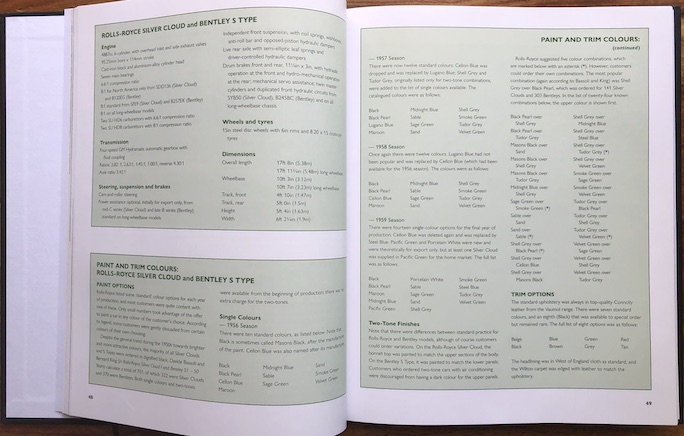 Once upon a time there was a book by this same title and same publisher, but a different author. That book was, ahem, not a great book. Its author is dead now, and it would not at all be surprising if a publisher simply revived an old property they already owned, bring in a new author to throw some spit and polish at it, and call it a day. At first glance the fact that both books are the exact same length, 192 pages, adds credence to that theory—but it turns out this is a different book, avoiding the factual errors evident in the old one and also striking an altogether different, more enthusiastic tone. And it now has color throughout! And it discusses other models contemporary to it (omitting the Phantom IV because that was not for the general consumer market). 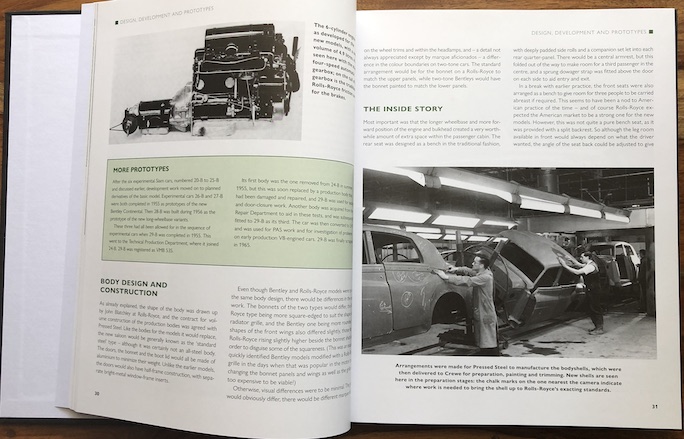 Also, if the old one had been good value for the money ($34.95 in 2000) the new one does even better: $36.99. What happened to twenty years of inflation?? Just to manage expectations, the title including the word “complete” is asking for trouble; the book is not, Taylor knows it and at no time pretends it is, but if that is what you need to have—and are prepared to pay a six times higher asking price—find a copy of Davide Bassoli’s Every Cloud has a Silver Lining. While on the subject, there is no Bibliography but there is a fine Index.

Among the many useful aspects of Taylor’s book are an adequately condensed backstory to the genesis of the Silver Cloud project, specifically in the context of post-WW II market and resource considerations; how US market expectations changed the firm’s calculus vis-a-vis utilizing its Bentley brand as a technology test bed; why Bentleys “had” to be priced lower, even if only by a token amount; and reliable data on options, prices, and chassis number sequences. All models are discussed in basically similar fashion: features, media reception, major modifications, especially noteworthy cars/coachwork/owners. 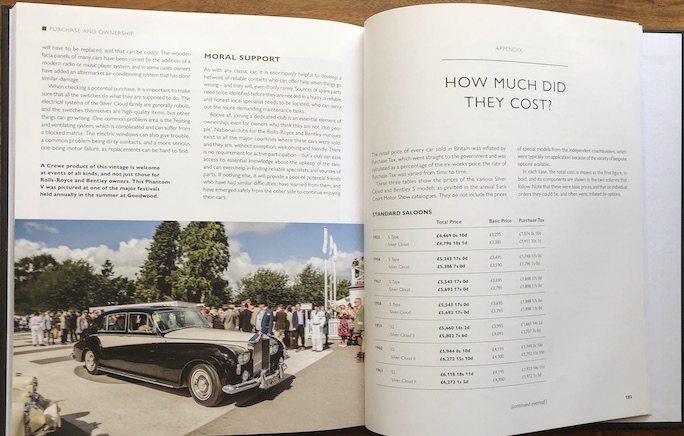 Talking about prices is always useful, and especially if they are given, as this book does, in the context of other goods such as, say, a house or other cars. In that regard, it is almost shocking to realize that on a £6000 car £577 was for the A/C (£825 on a coachbuilt model)—pretty much the cost of an entire lesser car!

Sure, there always could be more put into a book (cf. the obvious fact that Rolls-Royce and Bentley which are now separate brands were for 70 years united in an often lopsided relationship; or an explanation why Rolls-Royce manufactured under license other maker’s tech but modified to suit its own requirements) but this is a perfectly solid book just as it is.

Including Phantom V and VI, Bentley S and Continental