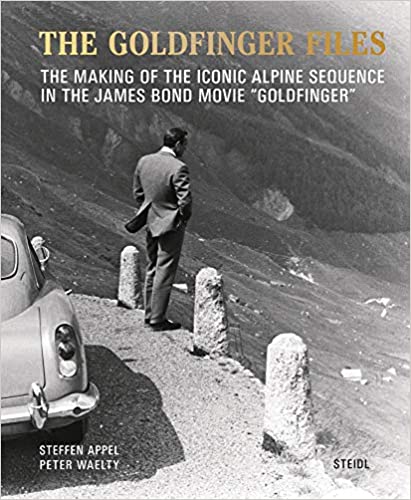 You know that Aston Martin has recreated the famous Goldfinger movie car, right? Even if you snag one of the few remaining of the 25 continuation DB5s ($3.5 million each) you won’t actually be able to re-enact that 1954 alpine chase scene this book is about—unless you have Auric Goldfinger-level riches and can buy the mountain too. This is because those new Astons have many of the gadgets of the movie car, which means they’re unlikely to be roadworthy in most countries. Incidentally, did you realize that the person responsible for some of the more outrageous gadgets (in the book the car has only a few) was a kid?? That would be Goldfinger director Guy Hamilton’s son Frank, and he wrote the Foreword here. 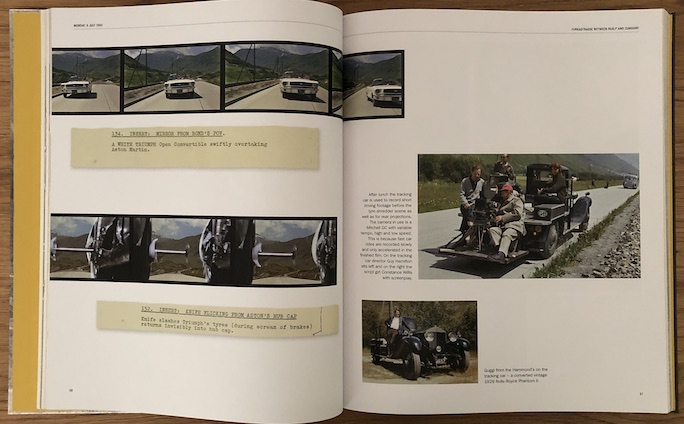 Interestingly, the script calls for Tilly Masterson to be driving a Triumph. It ended up being a Mustang because it had just then become the IT car of the day.

As one of Switzerland’s internet pioneers author Peter Wälty (b. 1965), a historian by training, earned himself the nickname “The James Bond of  Online Journalism.” More relevant to his role on this book, he wrote in 2008, with Michael Marti, a book in German, James Bond und die Schweiz (ISBN 978-3905800203) which covers the scenes shot there for several Bond movies along with portraits of the original Bond author Ian Fleming as well as actors etc. His German collaborator, Appel, a few years younger, saw Goldfinger as a teenager and resolved to own an Aston then and there—and 30 years later he does, silver like Bond’s but lhd. Also, his hobby of collecting Bond movie paraphernalia has made his orbit intersect with others in the Bond universe and, not least, landed him a side gig as a motor pool driver for the Spectre movie and possibly more in the future, provided he can get away from his day job as a real estate maven. Among his hoard are piles of photos, some apparently on loan from an undisclosed private source, that had never appeared in print until this book. 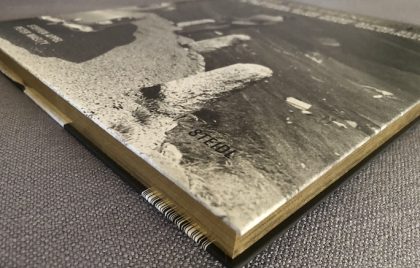 All of the above combine to make this a quite special book. Moreover, it is published by German art publisher Steidl which means great bookmaking skills—paper, printing, photo reproduction and all around great attention to detail such as playing up the gold theme by giving the book gilt edges and yellow endpapers. (Alas, quite unusual for a Steidl book this one has a few typos.)

Speaking of gold, one could be forgiven for thinking the name Goldfinger was a literary tool of Fleming’s, but it’s not. He actually knew someone with that name, but the first name, Auric, is a clever invention—look up “AU” on your Periodic Table. 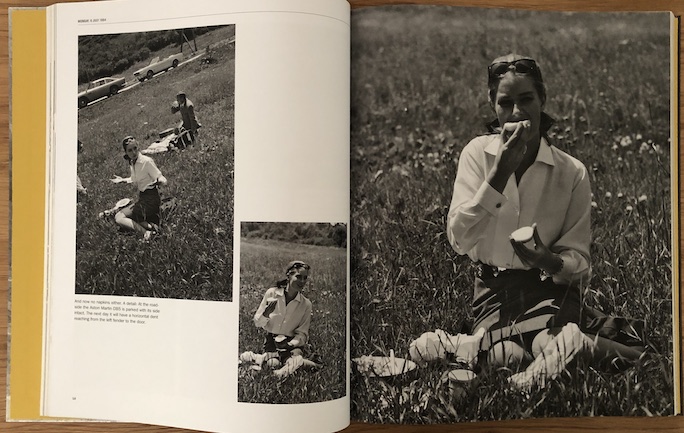 (Above and below) It’s not because the authors are desperate to fill space that so many shots of the same scene are used but to convey a sense of dynamism on the printed page. The captions call out a lot of detail, such as here (bottom right) the bottle of Johnny Walker Black sticking out of Sakata’s duty-free bag—even though the martial artist is said to have only drunk mineral water. 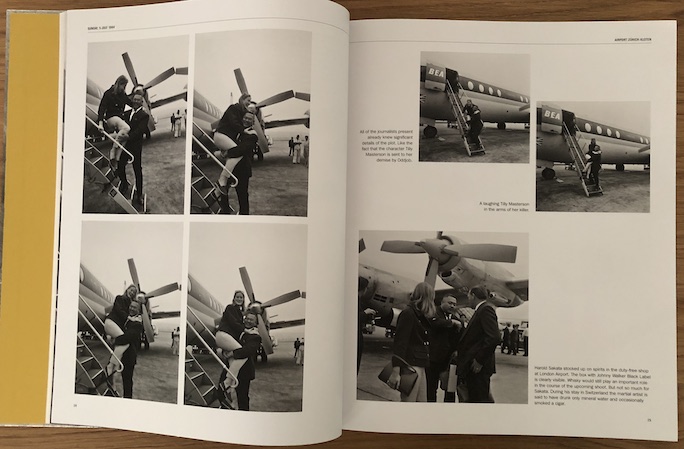 The book, at an oversize 11 x 13″, is presented as an “illustrated history,” recording each day of the week July 5–12, 1964 during which the car chase was shot, which in the movie takes up all of 6:37 minutes. If you’ve never read Fleming’s book you really should because it has quite a different flavor, not least because the Bond character is rather unlikeable (it was the seventh book in the series, and the third movie) which probably explains why no one took the slightest interest in the movie crew. Well, the Swiss military did because the location—which the production company only picked because none of the tourist spots could be bothered to waste perfectly good hotel rooms on them—was inside the military’s system of alpine fortresses and normally was not allowed to be photographed. In fact, one of the reasons so many of the photos gathered here have not been seen before is that they are snapshots taken by private persons, such as military personnel assigned to keep an eye on the movie folk. Movie buffs will of course know that there are a ton of “official” and thus widely distributed photographs because the movie production had a full-blown press corps in tow to drum up publicity. 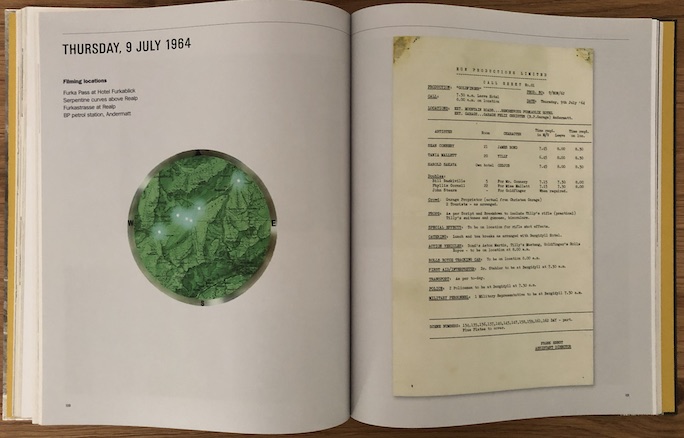 Not only does the book present many new visuals, it tells a better/more detailed story because the photos are synched to the chronology puzzled out from the shooting script and other artifacts such as daily call sheets (example above; the map on the left highlights the day’s locations). For instance, often photo captions will draw attention to the time indicated on people’s wristwatches (which the authors must surely have blown up to be able to see) which in turn allows the scene shown to be placed accurately in time and place. 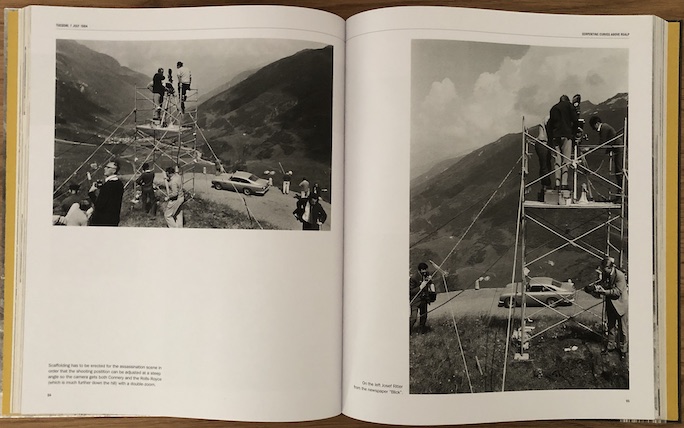 Just to avoid finger-wagging from Aston folk: yes, yes, we know in the book it’s a DB3—but that was the new Aston when the book came out, 1958, whereas the DB5 was the new car five years later when the movie got under way. 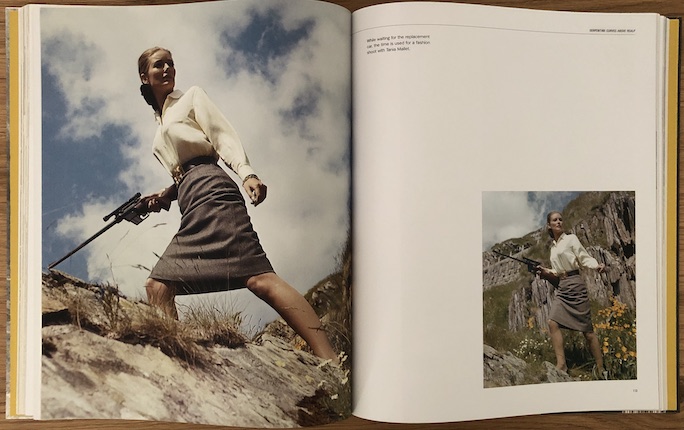 Not a scene from the movie but an impromptu fashion shoot to fill downtime on set while a replacement Aston Martin is flown in from London because the original car is out of commission with clutch problems. 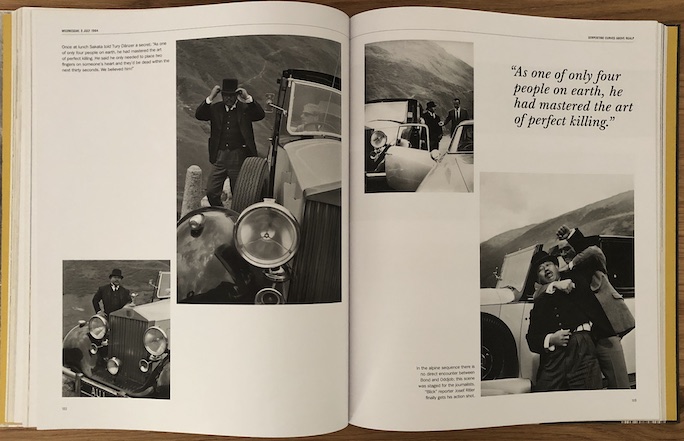 The fight scene is also not in the movie. The book quotes actor Sakata saying that he is one of only four people in the world who know how to kill for real in 30 seconds by placing two fingers on someone’s heart in just the right spot. “We believed him!”

This very, very nice book is almost unbecomingly cheap, making it a treat no one should overlook.

Berlinetta ‘50s: Rare Italian Coupés of the Fifties »
« The Race to the North