Vulcan Units of the Cold War 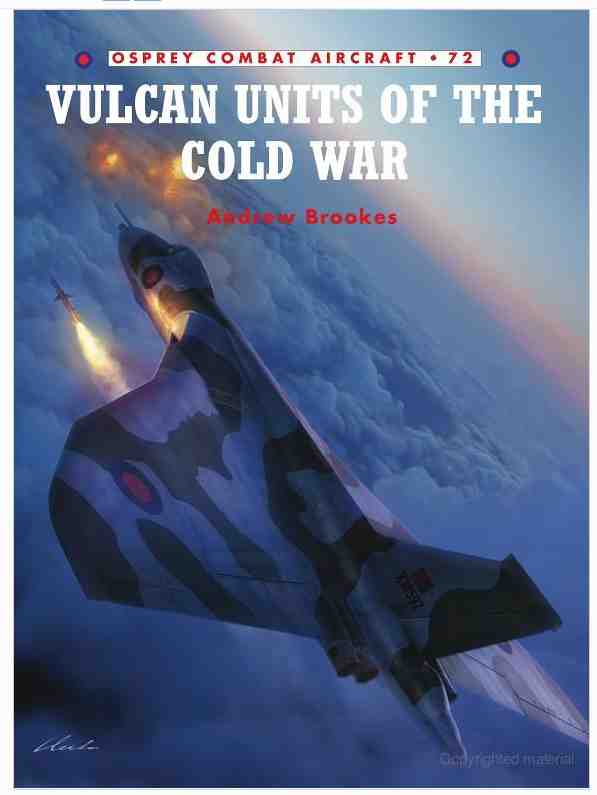 As all titles in Osprey’s Combat Aircraft series this slim paperback combines a brief but solid overview of the subject by an expert with first-hand commentary by various personnel, archival photos, and the hallmark set of color profile drawings. Not only is author Brookes an ex-Vulcan pilot, he also held various command posts and worked before and after his RAF stint in academic capacities and has 12 aviation books and two Defence Aerospace Journalist of the Year awards to his name. In other words, he has a wide field of context from which to draw and he knows how to communicate.

Designed in the late 1940s and first flown in August 1952 the Vulcan was put into service in 1957 but did not see active combat until the 1982 Falklands War. It spent most of its life, alongside its two V bomber siblings Valiant and Victor, at constant readiness in its primary role: nuclear deterrent. All types were also configurable as reconnaissance and air-to-air tankers.

After preliminary remarks about Britain’s decision to go nuclear and develop the capability to deliver a warhead, the V Force, highlights of Vulcan development and testing are presented. While the story is tightly focused it takes the time to weave in such secondary but interesting detail as the choice of name. The photo selection in these books is appropriate and adequate, but sometimes limited: we haven’t even heard about the first three prototypes yet when already we are shown a photo of a much later Mk 2 with its totally different wing. The photo does show a feature that relates to a generic point the text makes (the relationship between wing and center of gravity) but it is the wrong plane in the wrong place which does not help the novice reader get a grip on the subject. However, this particular shot shows marvelously well the outstanding feature of this plane, the massive delta wing, and it is one of the few overhead shots to show bomb bay open and landing gear extended.

Descriptions of doctrine and operations, Skybolt (non-operational) and Blue Steel (operational) missiles, and reconnaissance and tanker roles lead to a fairly detailed survey of crew training and specific missions, with particular focus on the Falklands conflict. Throughout there are many excerpts from interviews and there is hardly a page without a photo. All are sharp but some are exceedingly small, odd in a book in which each page has a 2″ wide margin of mostly white space.

Appended are detailed notes on the markings and specific configurations of the 24 planes in profile drawn by airbrush artist Chris Davey who has illustrated some 20 other Osprey titles, followed by a list of Vulcan squadrons, a brief Bibliography, and a decent Index. Davey’s profiles are identified by aircraft mark, tail number, squadron, base, and date. If it is the drawings that draw you to this book, do note that the ones by Martin Bowman in Profiles of Flight: V Bombers show more detail on the panels and more variety such as landing gear extended, crew ladder down, flaps etc. Also, both artists show a Mk 2 of 617 squadron carrying a Blue Steel stand-off missile but Davey’s missile is shorter, tucked deeper into the fuselage, and at a slightly different angle. Only Bowman shows both wing shapes (Mk 1 and Mk 2, a really key feature) in plan views but only as a solid black shape (i.e. no surface detail) whereas Davey shows only a Mk 2 in three top and one bottom view, in color and fully detailed. (Morale: you can’t ever have justone book!)

The cover art by Gareth Hector of a Vulcan launching a Shrike during its only offensive air action (Falklands, raid against radar stations at Port Stanley) deserves mention for its realism both in terms of artistic execution and situational accuracy. Not to forget, there are two pages of quite detailed 1/144 scale b/w line art of three types in profile, front, top and bottom views.