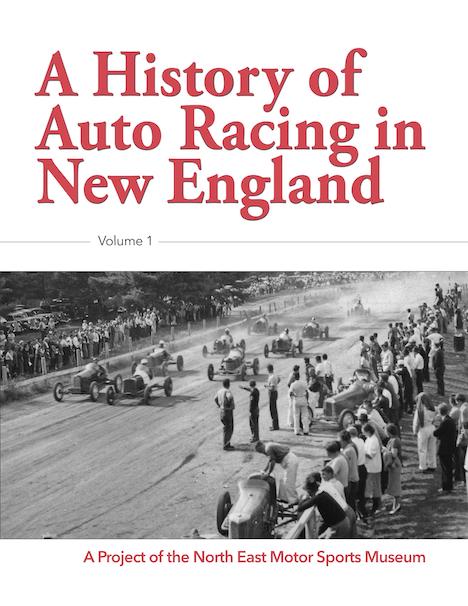 “Nearly forty years ago, a small group of Connecticut racing people—Buddy Krebs, Ed Flemke, Howie Hodge, and others—began talking about the importance of preserving New England’s auto-racing history. It was clear even then that so much of what had taken place on the region’s race tracks, garages and speed shops would never take place again. Over time, artifacts, cars, and memories were being lost, along with the stories they held.”

Several things about this book are surprising, which is something different than amazing, which the book also is, insofar as this small publisher doesn’t seem to have a bad apple on its book tree and routinely puts out books that contain and deliver more than their meagre price tags would suggest.

Unless you follow vintage racing it is, for instance, surprising to discover for just how long there has been organized racing in the six New England states. And even if you knew that, you surely never calculated how many 30-penny nails are needed to hold 3 million board feet of lumber together (or, be honest now, what a 30-penny nail is). Another surprising thing is that over 400 photos can fit on just about 300 pages, or that 300 densely packed pages can make so slender a volume, or that such a rich haul can be had for less than $35. 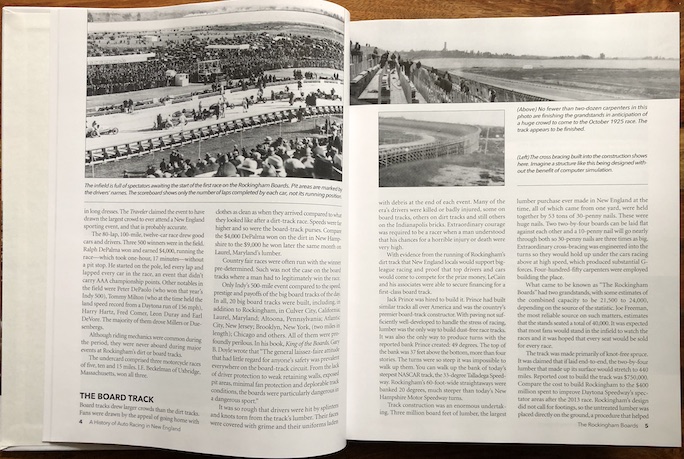 This is the Rockingham board track where, in 1925, the first big-time race in New England was held. Look at the small photo showing the banking and ponder this excerpt: “Jack Prince was hired to build it. Prince had built similar tracks all over America and was the country’s premier board-track constructor. With paving not sufficiently well-developed to handle the stress of racing, lumber was the only way to build dust-free race tracks. It was also the only way to produce turns with the reported bank Prince created: 49 degrees. The top of the bank was 37 feet above the bottom, more than four stories. The turns were so steep it was impossible to walk up them.”

Even if you don’t give a hoot about motor racing, or New England, anyone with an interest in the road manners and operation of old machinery will find a lot of interesting bits here. From little Midgets run by locals to big-time Maseratis and Ferraris campaigned by marquee names to souped-up Humpback Volvos to Top Fuel dragsters, everything gets its due here; even motorcycles. The story is presented in the form of themes that fall more or less in chronological order. 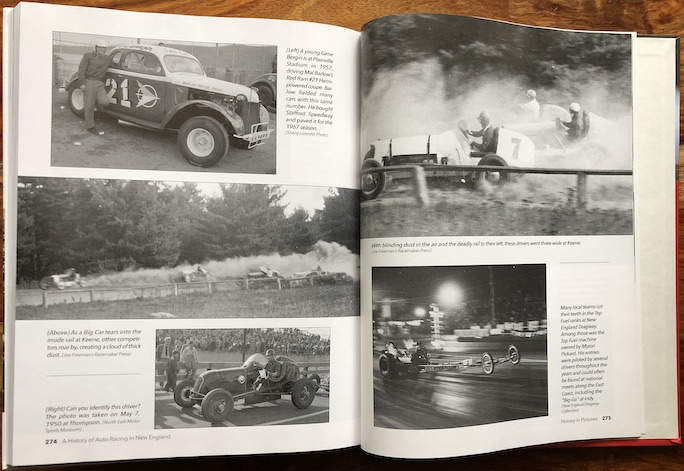 Enough variety for ya?

The book’s 13 chapters are penned by 17 authors, sometimes working in teams. All have a connection to racing: drivers, owners/collectors, historians, journalists. Another connection is the RHPG, the moving force behind the NEMSM. If this letter salad needs decoding, you really should have this book on your shopping list because your consumer dollar will help finance a most worthy cause: the North East Motor Sports Museum (NEMSM) owned by the Racing History Preservation Group (RHPG), the latter started specifically to preserve whatever oral history circulated and also to gather and curate all manner of artifacts.

The 10,000 square feet museum did not open until 2017, i.e. several years after this book which was intended as a companion to the museum’s displays was published. This gap is one reason we did not review the book right when it came out. Another, although this is neither here nor there, is that the book was presented as “Volume 1 of x” but no further ones have appeared since. But what put this book back on our to-do list at this time is that just a few weeks ago (February 2021) the museum’s library was named the “Joe Freeman Racemaker Press” library. Both these names are of course held in highest esteem by properly serious motorsports folk. Quite separate from the book projects Racemaker Press undertakes, their enormous photo archive is actively and comprehensively tended. A “huge number” of photos were made available to the museum at the start and Freeman is a contributor in many other ways. What all this means is that the NEMSM has a serious brain trust behind it; and when you look at the names involved with it and this book, you’ll agree that this is not some vanity project. Dick Berggren, a racer himself (1967–81)—and former TV reporter, motorsports journalist, and founder of Speedway Illustrated magazine—took on overall editorial management. 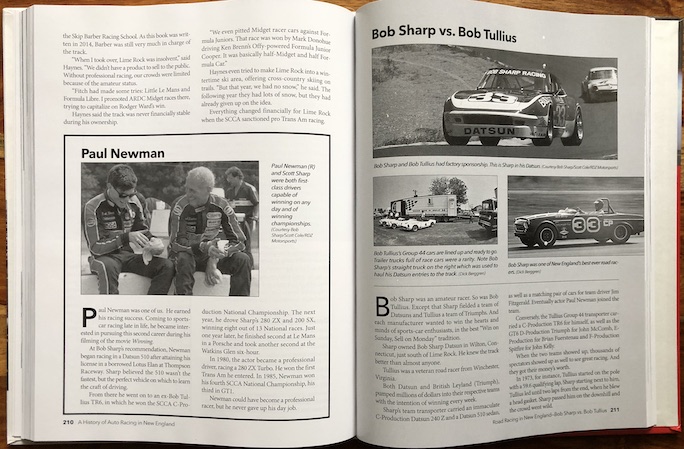 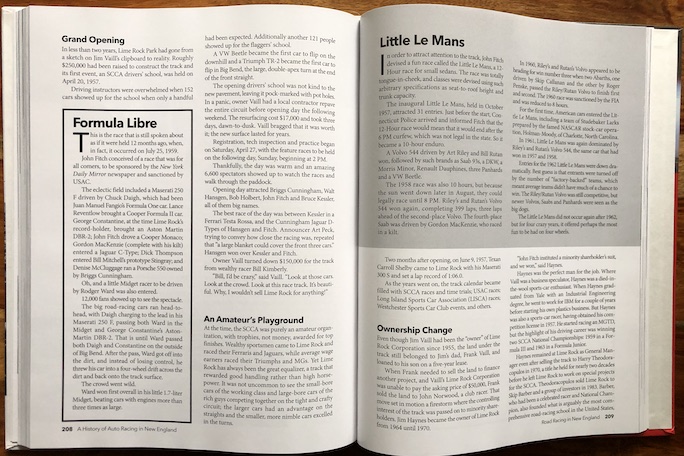 Also actively involved in creating content for the book is the publisher (whose tagline “Reading for Racers” says it all) and either they or some other noble soul/s must be given high marks for intelligent editing, task-appropriate layout (seemingly simplistic but it does exactly what it needs to), and standout proofreading. And, yes, there is an Index, not just some afterthought but 13 pages of 3-column entries. Many of the 400+ photos are new to the published record.

Long story short, the book is a joy to work with.

So let’s hope that this Volume 1 will not remain the only one! And do go to the museum, in Loudon, New Hampshire. 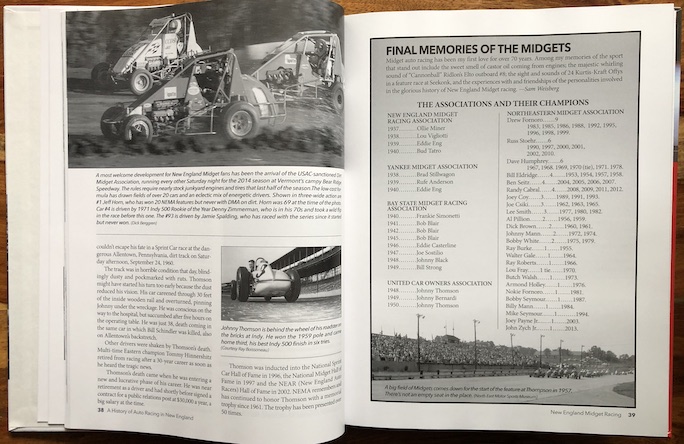