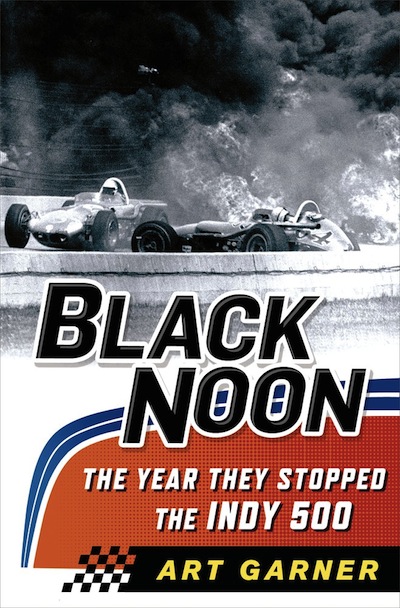 Appearing on the eve of the fiftieth anniversary of the 48th running of the International 500 Mile Sweepstakes, Black Noon lays out the story of the 1964 “Indy 500,” the first of the Memorial Day races to be stopped and then resumed. There is much more to that bland statement, of course. The reason for the race being halted was a horrific crash during the second lap that cost the lives of two of the drivers, Eddie Sachs and rookie Dave MacDonald.

Although the Memorial Day Classic had been halted and then ended due to rain on two previous occasions, 1926 and 1950, before May 30, 1964 the event had never been stopped due to a crash. While there had been fatal (as well as other) crashes that created extended caution periods during the race, the 500-miler had always managed to continue. Even when there was a crash on the opening lap of the 1958 race that cost Pat O’Connor his life and eliminated another eight cars, the race had always gone on. In 1955, when Bill Vukovich, apparently on his way to a third straight Indy victory, became involved in a crash on the back straight which sent him tumbling off the track and leaving the cars others involved (Rodger Ward, Al Keller, Johnny Boyd) blocking most of the track, the race continued.

Garner carefully provides the background to the 48th edition of the International 500 Mile Sweepstakes race, placing the actors and the venue into context, fitting the race and its narrative into the zeitgeist of an age of revolution in the world of national championship racing. Eddie Sachs, the “Clown Prince of Racing” and Dave MacDonald, “the Natural,” the characters at the center of the story, are given their due, but so are Mickey Thompson, Dan Gurney, Ford, and others involved, including the venue itself, the Indianapolis Motor Speedway.

For decades, the story of this one race has been influenced far more by folklore and mythology than rational, objective observation. This created a number of notions that simply became accepted as fact, rarely if ever questioned, and retold time and time again, becoming the accepted truth even among many of those claiming to be expert auto racing historians. While there were occasional attempts to examine the race and question some of these assumptions, that they tended to occur on Internet racing fora meant that auto racing historians aware of such discussions often tended to perpetuate the folklore regarding the race: the amount of fuel being carried by several of the cars, the actions of several of the drivers regarding the Mickey Thompson cars, the driving of Dave MacDonald, and the crash itself.

Garner is a journalist by trade and worked in automotive PR. He covers the entire month of May at the Speedway, paying attention to events not only at the track but elsewhere, building a narrative based upon careful, meticulous research. As a result, he gives us an excellent idea regarding all the hoopla, frustrations, and often harsh reality that caused a racing community to devote an entire month to homesteading at the Speedway. Using oral interviews and the fruits of the sort of slow, grinding research that historians employ in their search for finding interpretations of events, Garner provides not only an excellent book regarding this one particular race, but easily one of the best books on Indy racing in general.

What Garner suggests regarding the circumstances of the horrific crash that led to the 1964 race being halted is, in my opinion, as close as we may ever get to having an understanding of what plausibly happened. In doing so, Garner soundly refutes a number of myths and endless speculation. His interpretation of the events regarding the circumstances of the crash that cost the lives of Sachs and MacDonald is firmly rooted in research and is as objective a view of the incident as is possible. Given my own research into the event, I fully support Garner’s interpretation.

While Garner’s book is, generally, head and shoulders above the usual sort of work that seems to emerge today in the broad field of automotive competition history—the latter too often being absent—it contains a few puzzling errors that one hopes will be corrected in future printings. Interestingly, these don’t pertain to the race itself but are almost exclusively found in the material related to the development of the background to the race. While both puzzling and even annoying in some cases, overall they are rather minor and do not distract from the thrust of Garner’s otherwise carefully researched narrative.

It would have been useful if the publisher had provided Garner the opportunity to place his notes in the book either as endnotes or footnotes, given that his research could provide the basis for further work by others. While the bibliography provides the beginnings, the basis of a historiography for this and related topics, there is much to be gained by making the notes available to those wishing to conduct further research in this area. While perhaps not a “card-carrying” historian from the academic world, it is clear that Garner’s research meets the criteria expected of such endeavors.

This is an excellent book and one that is easy to recommend for both the hardcore enthusiast of the Memorial Day class and the more exacting automotive competition historian.