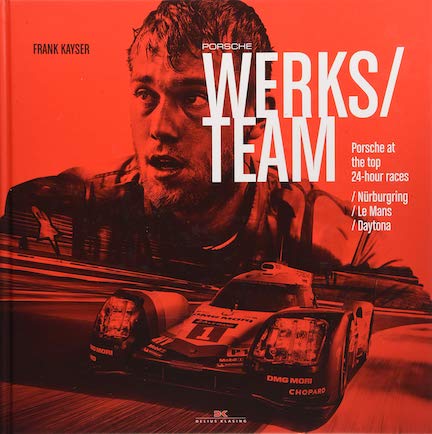 “How often must Pandora have wished she’d never opened that box? Racers refer to such temptation as a challenge. All the dams break after driving for twenty-four hours to reach the finish line. The toughest men now find themselves weeping in one another’s arms.”

Endorphins, baby; it’s what the brain is flooded with after a heightened state of emotion or tension switches off. Unless possessed of a hypercharged imagination, a reader of this book won’t quite have that experience but “emotion” is absolutely what this book is about. Beholding the name of the photographer, and also the name of the publisher, would have you expecting no less. 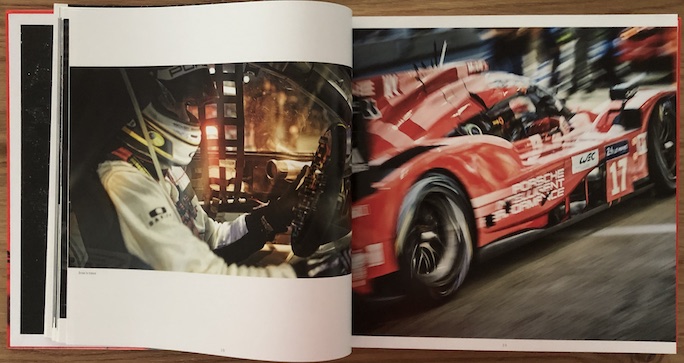 This is a photo-intensive look at three of the most iconic 24-hour races. It’s neither here nor there that they are presented in an order different from that listed on the cover (Daytona, Nürburgring, Le Mans)—although inquisitive minds will surely wonder. Maybe it’s because the book first appeared in German that the Nürburgring is listed first. 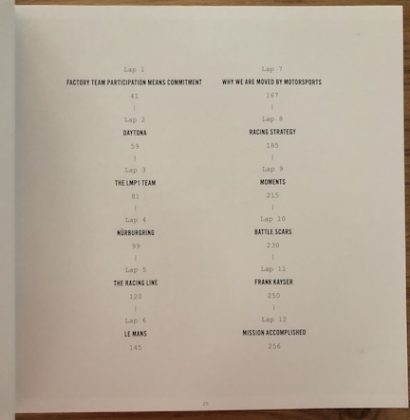 That photos take pride of place here is evident not least in the fact that the Table of Contents, the first bit of text, doesn’t appear until page 25, revealing 12 chapters or, in the parlance of this book, “laps.” If German photographer Kayser, who here functions more as photojournalist than artist, is not someone you already know about you’ll want to start with Lap 11 where the publisher’s Head of Corporate Publishing, Edwin Baaske, offers an appraisal of the man’s distinctive style and “language of images” whose “work extends far beyond pure technique.” 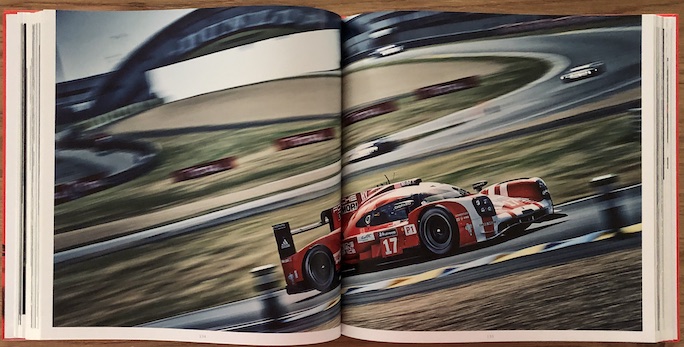 This is all very true but the picture Baaske, and for that matter Kayser himself talking a few pages later about his own work, paints is far from complete: Kayser has a long-standing association with Porsche AG in particular and sporting cars in general. As to technique, he must be the sort of person of whom it is said they have forgotten more than most of us will ever know. In fact, photographers who know all the gear and all the technical tricks will look at many of these photos and wonder how he did it (many effects can be accomplished many different ways, from fancy filters to post-shoot computer wizardry). The know-how the printer brought to the table obviously plays a role here, especially in those photos that look like hyperrealist paintings and have an edgy, glossy, metallic cast. 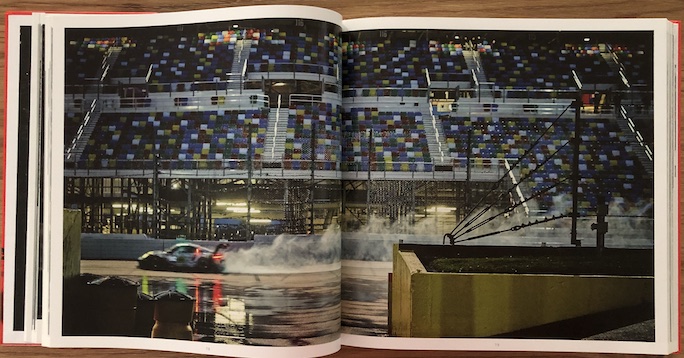 Narrative is exceedingly spare, so much so that quite a lot of photos have no captions whatsoever and even those that do are rather generic.

To return to the matter of the book’s “emotional” flavor consider the introductory quote. The writing style is more “stream of consciousness” and less “reportage”—even the chosen typeface emulating a typewriter font is noteworthy in how it gives that “of the moment” impression. In other words, and again with recognition of how this publisher goes about curating their offerings, this book is not interested in dispensing stats and summaries and the same old/same old treatment of racing, personnel, tracks etc. but to convey what it’s like to be there: in the car, even under the car (mechanics), in the pits, in the stands, rain/shine, day/night. 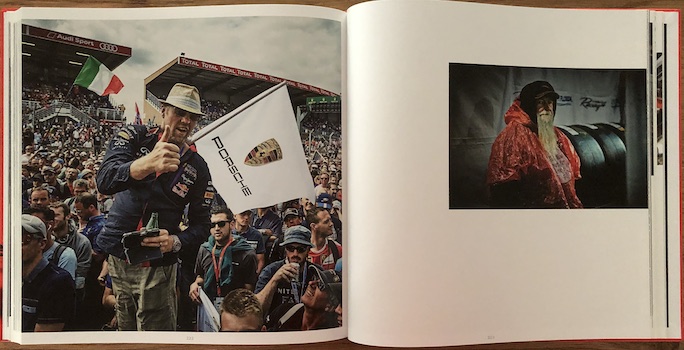 The composition/framing of the photos is extraordinarily intelligent in this regard, and one can only regret that only 223 of over 2000 images—preselected out of a trove of over a million!—made it into the book. You’ve surely taken a photo before: it takes practically no time to press the button. Kayser clocked 1120 camera hours . . . 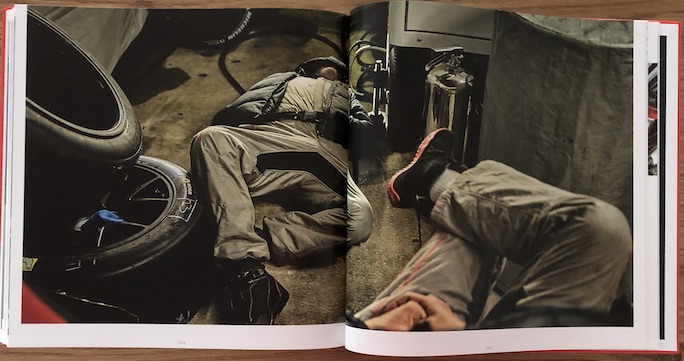 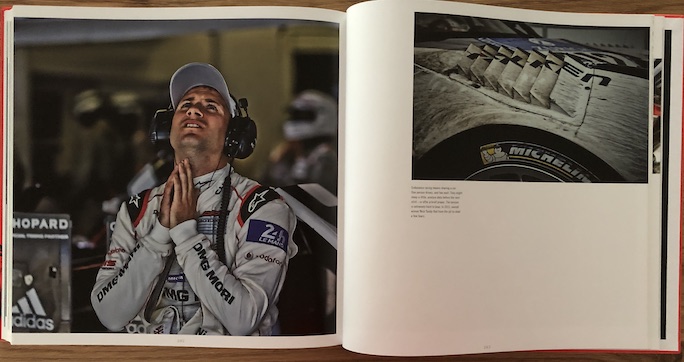 He does offer just a glimpse into how the Porsche team came around to accepting him as one of the family (“anything but easy”), letting him melt into the background and, thus embedded, able to capture truly candid images charged with “meaning” and meta context in which the sum is truly greater than the parts that populate the frame. 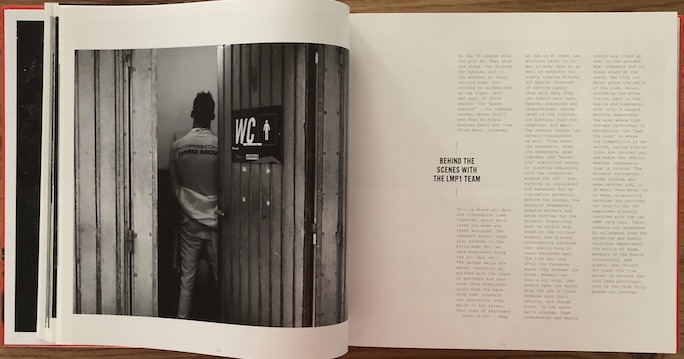 Porsche folk will surely recognize the name of Heike Hientzsch who attends to the wordsmithing here. Interspersed with freelance gigs she was a Press Officer und Media Manager in F1 (Williams, Sauber) and, relevant to this book, is Porsche’s media and PR lead for the LMP1 Team. An English version of her 2018 book Legendary: The Porsche 919 Hybrid Project (ISBN 978-3667116413) will be released in English in the fall of 2019 by this publisher.

LMP1 Vice President Fritz Enzinger also contributes and while his words may be few they offer, perhaps inadvertently, a really telling insight: Porsche, when he was hired in 2011, after a 30-year stint at BMW (25 of which in motorsports), had gotten stuck in internal structures that were getting in the way of conquering Le Mans. Readers who know the history of Porsche, that small family-like hothouse of innovation and thinking outside the box, will marvel at Porsche spawning such a bureaucracy that it lost sight of how teams work and coalesce—and excel. 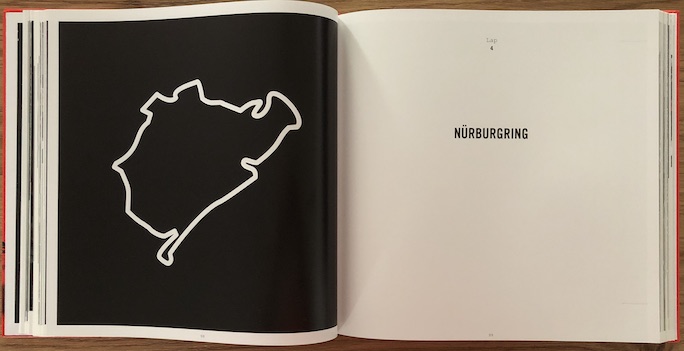 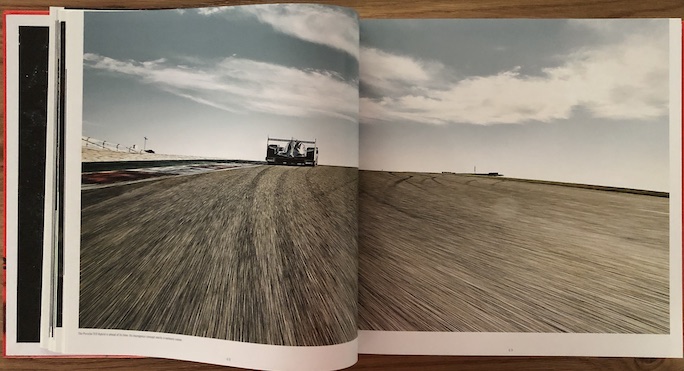 At almost 12 inches square the book the book is a properly sized canvas for the photos. It begs to be picked up and lingered over. Bibliophiles will rejoice that it has a properly rounded spine, allowing the many crossover bleeds to yield more detail.