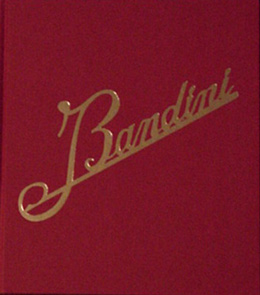 (English and Italian) Ilario, that is, not Lorenzo, the ill-fated Ferrari pilot. Ilario (1911–1992), known as “Lili” to his close friends, was a remarkable man who during the course of some 30 years created the jewel-like Bandini sports racers. His story is not only fascinating, but he typifies the great time of small Italian racecar constructors who planned to conquer the racing world, at least in class. The Bandini badge featured a bantam rooster crowing (the symbol of the town of Forli), in place of the prancing horse of Ferrari or the Bull of Lamborgini. It was an appropriate device, for Bandini, a very short person, who strutted and persevered until the racing world took notice of his cars and victories, primarily in the heavily contested 750cc class. Ilario ruled the roost at home as well, but never married because he was too busy chasing beautiful women “who eventually all left me because I annoyed them.” One has to admire the sheer chutzpah of the guy.

Likewise, one also has to admire this limited-edition book that is devoted to Ilario Bandini and was published on the occasion of the 10-year anniversary of his death.

Like the man, it is full of life and enthusiasm; a scrapbook put together in typically Italian style, as if they had taken a blank book and with great passion and excitement poured between the covers the many aspects and achievements of Bandini and his cars, in no particular fashion. For that reason, it is a joy to behold. It is also informative, interesting, and contains a great deal of new information. There is no Table of Contents but there is a useful Index. Most of Ilario’s races are recorded in detail but there is no overall listing of worldwide Bandini victories, and I am assured that there are a few minor errors in captions and with the translations.

Authors Franco Fabbri (Bandini’s personal physician) and Cesare Sangiorgi (one of the official drivers of the Scuderia Bandini) not only compiled the hundreds of clippings, letters, and photos left by Bandini after his death in 1992 but interviewed many of Bandini’s employees. Their stories bring a surprising depth to the Ilario Bandini story, as do many of the short contributions from friends and drivers scattered throughout the volume. There is also a long and informative chapter about Bandini in America, including accounts of Ilario’s 1961 visit to Daytona Speedway.

Seventy-five Bandinis were constructed in Ilario’s Lancia dealership between 1947 and 1972, of which 45 have been found, restored, and listed in the book, along with the present owners. There is no listing by serial numbers, as Bandini serial numbers were not consistent, or even applicable in some cases.

Bandini is a tribute paid for and authorized by the nephew of Ilario Bandini, Dr. Dino Bandini. Dr. Bandini is also putting finishing touches on the Bandini Museum in Forli, which will house at least seven examples of Bandini sportsracers.

Posted Under: Automobiles, History, Italian, Multilingual / Not English, Out of Print | Author: Pete Vack | No comments yet

Porsche: The Sports Racing Cars 1953–72 »
« The Airplane: A History of Its Technology