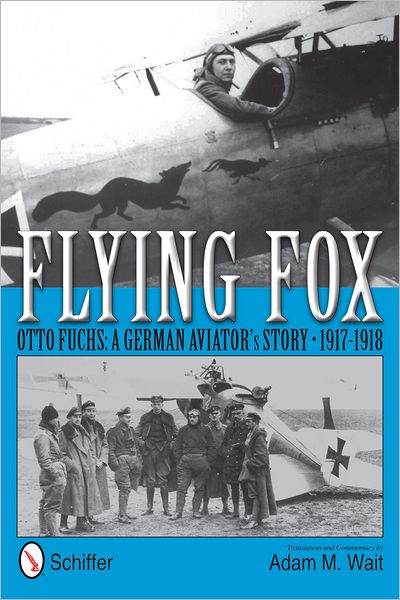 This is a good autobiographical novel about what it was like to be a World War I German fighter pilot. The story is told as a “fictional” account of his own adventures by Otto Fuchs, a relatively unknown pilot who served at the front and survived the war. The resulting book, We Flyers: Wartime Reminiscences of an Unknown Airman (or Wir Flieger: Kriegserinnerungen eines Unbekannten in German published by Koehler Verlag), originally published in highly edited form, was considered “ideologically unacceptable” in 1933 Germany, and has never been translated into English until now. In fact, the reference to the “unknown” airman has for years caused endless speculation as to the veracity of this book.

Translator and commentator Adam Wait does an excellent job interpreting the various dialects and colloquialisms used by Fuchs’ full range of characters. Fuchs was described in real life by one of his commanding officers during the war as exhibiting “a keen ability to capture the essence of an individual’s personality.” This insight is what brings the book alive, making it more than just a thinly disguised retelling of historical events.

What makes the book even more successful are the many period photos and maps scatted throughout the text that show the actual people, places, and planes being discussed as the story unfolds. Much detective work at archives in Germany and England and visits to the French airfields can now link Fuchs’ “fictional” events to the real people and events described. In essence, Fuchs tells it like it was. He changes the names to protect the innocent, but that’s about all. He also changed some of the chronology but Wait has sorted all this. If you’re looking for guns and bullets you’ll be happy enough—but if you are looking for the personalities of the combatants, then you’re in for a real treat. This book takes the reader below a simple two-dimensional surface of names, dates, and battles. It also exposes the underlying drive, or zeitgeist, of the times. As Fuchs puts it, describing his characters’ initial youthful enthusiasm for the war, “I remember well with what passion and zeal my little self drove into the hot lava stream of general enthusiasm and melted into it.” Later on, toward the end of the war, in a chapter cut from the original published version, Fuchs allows one of his characters to criticize the negative power of zeitgeist, and how it was being used by the government to control the general public. “Heaven knows what sort of stupidity they would succumb to without a single voice of reason raising itself to speak their conscience!”

But fear not for your literary sanity worrying about “deep thoughts.” The book only dives down occasionally into historical hand-wringing, based on Goethe’s and Hegel’s intellectual mysticisms concerning the inevitable advance of history through a constant seesaw cogwork gear set of cause-and-effect events that supposedly determines our future. The rest of the book is real action and adventure, realistically told in the semi-poetical style typical of the time. While flying in an open cockpit at night Fuchs is able to tell what he is flying over by observing that “From time to time the warm breath of an orchard envelops us or the still coolness of the meadows exhales upon us.” He also wryly notes that while flying low over enemy troops his plane gains “more lift due to the many curses ascending upwards.”

No matter the writing style, the author’s meaning rings true and it is not hard to place yourself beside him in the cockpit or on the ground looking up at the weather. For example, after only three days’ training as a fighter pilot he is back over the front, trying to discern friendly planes from enemy planes. “A swarm of gnats becomes visible, swiftly comes closer, whizzes by, turns, and for a few seconds shows the upper surfaces of its wings. Try as one might, no further details can be made out against the blinding rays of the sun. At the same time things get lively up front and above, and one is equally uncertain who is friend and who is foe.” The fog of war as told by a poet.

An excellent mixture of commentary, autobiographical fiction, and well-researched historical background by Adam Wait make up the book. With 139 high-quality period photos sprinkled throughout, it all comes together to make for a very effective retelling of the reality of the day. As for the mechanical construction of the book itself, it too is a high-quality presentation. A nice dust cover embraces marbled endpapers and glossy coated stock throughout. (Consider the attention to detail: the cover colors of blue and white where chosen to represent the Kingdom of Bavaria where Fuchs was born and the black lettering of the subtitle combined with the white of the main title allude to the Prussian units the Fox flew with.) The graceful layout of the text and picture captions make for easy reading and leave the owner of the book with the prideful feeling of a volume well bought. The purchase price, while not cheap, is far less expensive than one would expect for the value received. The low price is partly a result of this book being quite small for a Schiffer book. This of course means the illustrations are on the small side and a few of the maps are, in fact, so small as to almost require a magnifying glass. To remedy this, Wait shows them on his blog (see note on the rear dustjacket flap) much larger—and in color. Much more importantly, Wait’s blog offers a longish list of errata [a] necessitated by mistakes introduced at the last minute by his editor and [b] his own oversights. Some of these are simple punctuation issues, others actually do change the meaning of the text as printed! In any case, it is absolutely commendable that Wait wants to attain the perfection he feels the subject deserves.