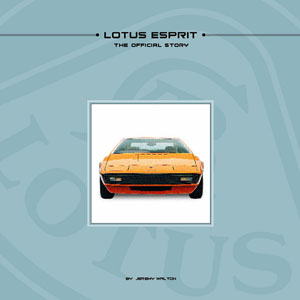 The Lotus Esprit may have held a record among British sports cars for continuous production—28 years and almost 11,000 copies sold—but pick up an automotive encyclopedia today and you’ll find that this Lotus hardly warrants a footnote. And—except for a very few low-number, special models—don’t even look at a classic car price guide . . .

Originally intended to be named “Kiwi” (which would not only have been plain weird but also broken Lotus’ tradition of starting road car names with the letter “E”) the Esprit was among designer Giorgetto Giugiaro’s first experiments with polygonal “origami” designs—it looked sharp figuratively and literally. Its handling, too, was sharp but the power anemic and after only a few years a long, long string of improvements began that would lead to some 25 distinct models between 1976 and 2004.

“Created and marketed against all the financial odds because of massive personal commitment from staff whose loyalty was frequently overstressed on less than generous pay, the Esprit had a particularly good human story to tell.”

And author Walton was there for all of them. In fact, his involvement predates even the launch of the car, by a year. He is probably the only journalist to have driven and written about all models and this long-standing relationship with the factory has made possible unrivaled access to company archives and employees. Which brings us to the subtitle of the book, “The Official Story.” From this it is not be inferred that this is a Lotus-commissioned, -sponsored, or -directed work. A more apropos subtitle would have been “The Complete Story” but that title was already used on Walton’s previous Esprit book, in 1991 (his first one was in 1981)—prematurely, obviously, since the Esprit saga not only continued for another 13 years after that but saw the most radical improvement in the Esprit’s fortunes, the introduction of the V8 in 1996.

The Foreword by erstwhile Lotus engineer and later CEO Mike Kimberley tells the story of his and Colin Chapman’s visit to the 1971 Turin auto show and how their appreciation of Giugiaro’s Maserati concept cars, the Boomerang and Bora, led to the commissioning of an Esprit concept car unveiled only one year later. The quote used at the beginning of this review is really all you need to know to grasp the scope of this book. Told against the backdrop of a volatile but genius boss (d. 1982), financial woes ranging from a global fuel crisis to hard-to-find financing and a costly racing program, and ever more complex global motorcar regulations we follow the Esprit’s foray away from Lotus’ 1960s kit-car image and upmarket into Porsche and Ferrari territory. From conception, production and track history, all derivatives are covered in good and really engagingly presented detail. Roughly the first 2/3 of the book present design philosophy, personnel, and specific construction features of the car and the remainder covers in chronological order the car’s entire life cycle.

Appended are performance stats, technical specs, thumbnail reproductions of various brochures (not identified by date or market) and book and magazine covers (again without any particulars). There is an Index, quite brief, and mostly of people and publications.

The book is uncommonly well illustrated, in no small matter thanks to publisher William Taylor’s own photo work. The significantly oversize format (12 x 12″) lends itself well to generously large illustrations which depict every aspect of design, construction, and use in thoroughly satisfying manner. The book is also, to say the least, “design intensive.” This is not a euphemism but a compliment: the look and use of graphics is bold, loud, deliberately evoking the period and spirit of the car. While the reviewer begrudgingly grants that there is a Love It/Hate It dimension to such matters, the reader should accept that the design shows skill, intent, and originality. It is not merely decoration or subservient to the text but part of the overall experience of the book. In the hands of a lesser designer it could easily have degraded into an Art for Art’s Sake exercise. From the illustrated endpapers to the cloth book ribbon to the quality of cover and paper stock, this book demonstrates why Coterie Press has a well-earned reputation for making beautiful books.

Walton has also written a similarly fine book about the Lotus Elise for the same publisher.

Fireship: The Terror Weapon of the Age of Sail »
« Lady Lucy Houston DBE, Aviation Champion and Mother of the Spitfire