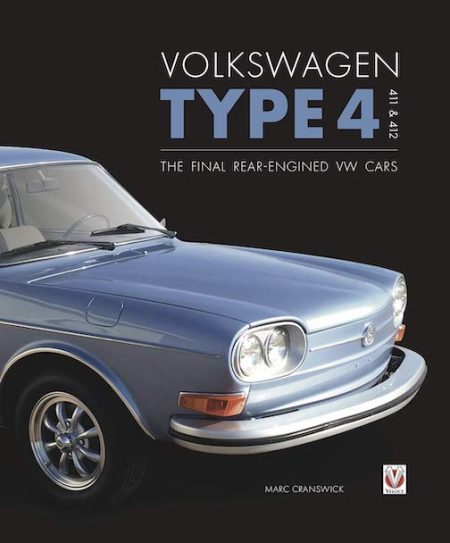 “The VW Type 4 turned out to be a transitional cart, at a time when Volkswagen was itself in flux. A rear-engined air-cooled car, but with unitary construction, and strut type front and semi-trailing arm rear suspension. A company looking to the future, but unsure if the solution should be based on traditional Porsche/VW thinking, or that utilized by contemporary European rivals?”

The press called it “the best Volkswagen yet.” It was VW’s largest passenger vehicle with the company’s largest engine. It came in 2-door, 4-door, and 5-door body styles. It looked good and had bullet-proof VW reliability. What’s not to love? But over its 6-year production run (1968–72 for the 411 and 1972–74 for the 412), only about 370,000 were made. VW calling it a luxury car didn’t impress Americans. As British author Marc Cranswick says early on, the Type 4 was a misunderstood car.

Outside of shop and owners manuals there is no serious literature about the Type 4, certainly not in English, so on that score Cranswick is doing the world a service. He has many auto books and magazine articles under his belt, which makes it painful to have to say that at times the ideas in this book feel quite jumbled. Consider an example from the very first chapter in which the 30-year stretch of VW history that precedes the Type 4 is surveyed: “Hitler flattened the Beetle’s proposed hood profile, although this was later undone by the 1971 Super Beetle.” Well. At the very least one would have to lament the lack of internal logic here. An editor is what this book needed, someone who would have, for instance, weeded out the use of abbreviations without first spelling them out (cf. CKD [Completely Knocked Down] which, in fact, is not spelled out anywhere, nor even included in the Index). Likewise, the non-specialist, casual reader will not benefit from being bombarded right from the get-go with a plethora of type designations that, absent a timeline or chart or some such, will make it well nigh impossible to summon a mental image of the car/s to which the text is referring. The irony here is that Cranswick knows perfectly well how to do it better, but it takes until page 8 to see it in action: “1961 Type 3 1500 notchback”—absolutely no ambiguity here. Long story short, the book takes effort.

But, again, this being the only English-language book-length treatment of the Type 4, the book connects all the necessary dots for understanding the model in the context of consumer expectations of the day and also VW’s internal juggling of priorities vis-a-vis its other brands (Audi, in particular) while at the same time being on the cusp of transitioning Volkswagens from air to water cooling. Prices are mentioned, which always helps in understanding the business case. Design and technical bits are woven into the narrative but are not the book’s core focus. Many of the photos are sourced from individual owners, which is the polite way of saying they are not professional-grade or fully representative of all the various markets. But there are lots of delightful ads.

There are four Appendices but here too once cannot help but think that focus was lost somehow: there are a mere 2 pages of technical specs (and of only the 1969 411 and the 1971 411E) but 7 on “Sporting VWs” and 10 on “Off-Road VWs”—interesting, sure, but only marginally relevant to the Type 4. Also appended is a short list of—worldwide—vendors, resources, clubs. Rather unexpected for a book of this kind there are Footnotes, and even a Bibliography and Index are not routinely found in books by this publisher!

So, the book accomplishes plenty; that it could be more is neither here nor there.