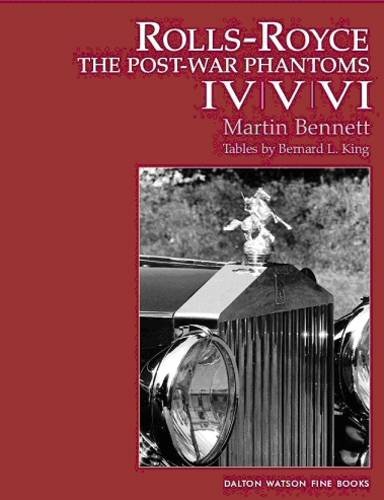 It may get old to keep saying it, but since the publishing team of Glyn & Jean Morris/Martin Button acquired and revived in the mid-2000s the old and important Dalton Watson publishing house founded by Lawrence Dalton, they have not turned out a bad-looking or unworthy book yet. This one, too, is a fine example of the book-making craft.

In terms of content, this is the first—and only—book to cover these particular models, which represent the epitome of Rolls-Royce’s bespoke work, in one opus. Each of the about 1000 cars is listed (Phantoms VI for the first time!), by none other than list-maker extraordinaire Bernard King in a format similar to his Complete Classics series of books.

The Phantom IV being the one model that was always ever only available, as new, to heads of state, is always one to intrigue the populace. Only 18 cars were built, and not only all are covered here in great detail but, a particular treat, 19 H.J. Mulliner and 3 Park Ward proposals that were not built are also covered. The other two cars, Phantom V and VI, are arranged by design number or some other common denominator.

One chapter is devoted to the actual mechanics of designing and building the bodies as well as a summary of each of the respective coachbuilders’ output. Appended are a description of all the Handbooks and Technical Specs. The Index is commendably thorough but unconventional in that titled persons are listed under their title not their name: cf. [the] Aga Khan is listed under “P” for Prince.

Tom McCahill on Sports Cars »
« Fifty Sides of The Beach Boys, The Songs That Tell Their Story