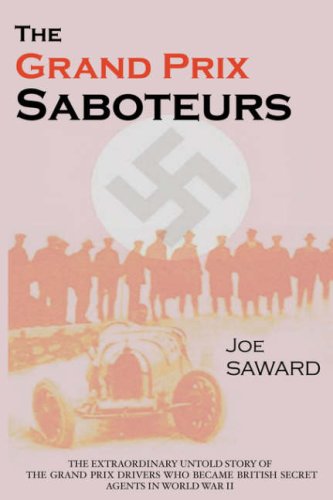 The Grand Prix Saboteurs is the work of Joe Saward, whose profession is writing about Formula 1 racing and sharing his thoughts on the topic on his blog. In 1983, Saward earned a degree in modern history from Bedford College, University of London, where his studies focused on the Central Intelligence Agency and its covert activities during the Viet-Nam War. During his career as a racing journalist, Saward could be observed wearing a baseball cap with “CIA” emblazoned on it, and this book would seem to combine these interests.

Saward states that the research for The Grand Prix Saboteurs extended over a period of 18 years, during which time, for various reasons he was unable to find a publisher interested in the story. Therefore, Saward apparently decided to self-publish the story that he had been working on for so many years: the existence and activities of a resistance network in France that included among its members a number of racing drivers, including Le Mans winner Robert Benoist and one who was member of the British Special Operations Executive (SOE), William Grover Williams—the “W. Williams” who won the inaugural Grand Prix of Monaco in 1929.

This story combines Saward’s interests in both covert ops and motor racing. As such, this certainly should make for an interesting tale. Unfortunately, the book becomes very much a muddle at times, marred by both an astonishing number of misspellings and the too obvious lack of any apparent editing. The latter manifests itself by the jarring absence of words in sentences, leading to moments of confusion which are further compounded by what seems to be the author’s desire to not leave out one iota of his many years of research. This results in something of a miasma of text, taxing a reader’s willingness to slog through it.

Despite what is definitely an interesting, even amazing tale of courage, derring-do and almost cinematic acts of bravery, ultimately, the book falls flat. There is no doubt that this could certainly have been a great book, but it just can’t pull it off. I really wanted to like this book, especially given its topic and the characters involved in the tale, most of whom have been given little of the attention they deserve, at least in the English language, whether in motorsport or covert operations.

In the end, however, I found myself wondering more about the book that could have and should been, rather than the book that I held in my hands. Given his talent as a racing writer and his obvious interest in history, it seems only natural to have expected more. Then again, with The Grand Prix Saboteurs as an example, perhaps it is best that Saward chose writing about motor racing rather than pursuing a career as an academic historian, where ideas and interpretations are openly challenged and discussed and not merely dismissed, as he noted elsewhere recently, as so much “intellectual masturbation.”

It is, therefore, difficult to recommend The Grand Saboteurs unreservedly, although I am sure that there are those willing to overlook its obvious flaws.

John, George and the HWMs »
« An English Car Designer Abroad