The Horten Brothers and Their All-Wing Aircraft 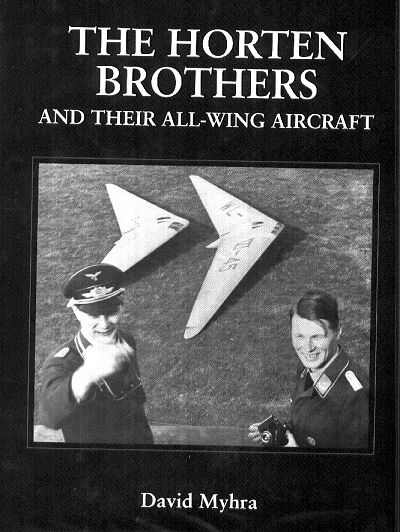 World War Two left the world with a number of very technologically advanced German twin-jet aircraft designs. Both the Messerschmitt ME 262 twin-jet fighter and the Arado Ar 234 high-altitude reconnaissance jet that regularly photographed England from above, are interesting examples of the successful grafting of the then–new jet engine technology onto basically traditional airframe designs. Even more interesting, however, was the German application of jet engines with a radically new and equally technologically innovative airframe: the flying wing, a tailless, all-wing, low-drag, high-efficiency airfoil. The result was the almost completely forgotten, and frighteningly futuristic-looking 1944–1945 Horten Ho 9 V2-B, and Ho 229 V3 all-wing fighters.

This well-designed and graphically interesting hardcover book (even has nicely marbled endpapers!) relates in depth the story of two brothers, Walter and Reimar, who legally and illegally wend their way through the military and Nazi bureaucracy to turn their childhood dreams into reality.

The brothers were born to relatively well-off intellectual parents, and as German teenagers in the early 1930s, designed, built, and then flew a series of all-wing manned tailless gliders. By the late 1930s they had equipped their unique all-wing designs with twin pusher propellers, creating small, but excitingly efficient, highly maneuverable one- and two-man aircraft.

Because neither brother was initially university trained in the mathematics considered necessary to design a swept-back flying wing, or worked for an established German aircraft manufacturer, their flying wings were dismissed by an extremely insular German aircraft industry. Denied wind tunnel use, the brothers constructed full-sized gliders and “wind tunnel–tested” them by flyingin them. The data acquired on-the-fly allowed them to leapfrog over the most advanced German theoretical knowledge concerning high-speed swept-back wing design. When finally admitted into the German aircraft industry late in the war, their previously unshared data revolutionized swept-back wing design, helping Hans Multhropp design the Focke-Wulf Fw Ta 183. In later redesigns by various countries this aircraft became known as the MiG-15, F-86, and Argentina’s Pulque Dos.

In 1943 Hermann Göring was given a flight demonstration of a Horten twin-propeller “German Mosquito” fighter prototype and immediately approved the construction of a twin jet–powered example, funding the project with half a million Reich Marks. Unknown to Göring, the Hortens, both members of the Luftwaffe, had already secretly fooled the Nazi bureaucracy into funding a fake top-secret project in 1941 (Sonderkommando L In 3) to build their twin jet all-wing fighter. As a result, by 1943 a flying example was nearing completion using two Junkers Jumo 004 jet engines. However, a combination of industrial infighting, a test flight crash, and the war’s end prevented the construction of anything more than a few all-wing jet-powered prototypes. The production process was under way, but ultimately stillborn.

After the war Reimar illegally relocated to Argentina along with Folke-Wulf designer Kurt Tank and 60 German aeronautical engineers. Among many other advanced aerodynamic shapes, Reimar designed the IAe 48 high-altitude reconnaissance jet. Never built, the 1954 design looked like an advanced miniature 1956 B-58 Hustler. Although “fantastically futuristic” and “stealthy” can be accurately applied to the Horten all-wing designs, the idea that the war could have had a different outcome if only they had been put into production is misleading. The German aircraft industry had many, many advanced jet aircraft designs, some flying for years (Me 262), some freshly designed (Fw Ta 183), but all of them hobbled by unreliable jet engines. No matter how revolutionary the airframe design, self-destructing jet engines due to turbine blade failures prevented reliable use of jet engine technology in combat.

North Dakota–born David Myhra, the author of this book and many others on advanced wartime German aircraft development, is a graduate of Princeton University, a Rockefeller Foundation Fellow, a trained Marine Corps field intelligence man, and a part-time member of the U.S. intelligence community. Well-written and easily readable accounts of cutting-edge technology seem to be his specialty. That ability, plus thorough fact-finding makes this book fascinating reading, leaving little or nothing to doubt. However, daydreaming about what could have been by projecting a future that was never really possible underscores the basic fault of this otherwise excellent book. In this reviewer’s opinion, Germany’s defeat was inevitable, not for want of technological advances, but due to the bureaucracy and ineptitude of the German Air Ministry, coupled with the lack of essential resources (cobalt, molybdenum, nickel for turbine blades, fuel, and limited mass production of vital aircraft).

A Foreword, Introduction, four Appendices, a Bibliography and a useful Index (with a few misspellings) round out the subject matter. The 60 three-view line drawings in Appendix III display, in chronological order from 1931, the steady march of Horten all-wing design. High-quality photos throughout help bring the story alive. The chapter entitled “Argentina”, which describes the exodus of advanced German aeronautical knowledge to Argentina, Russia, and the United States, along with the failed attempts to relocate to China and India after the war is worth a book all its own.

The Hortens’ all-wing “Dutch roll” flight control problems (where the nose of the plane weaves slowly back and forth in a figure-eight pattern) created by the lack of a vertical rudder are only now being overcome with sophisticated computer split-flap management programs, finally making the aerodynamically efficient all-wing airfoil the wave of the future 80 years after its initial development.

While this publisher tends to keep books in print for an uncommonly long time, there will be much gnashing of teeth when they’re finally gone—get them while you can.