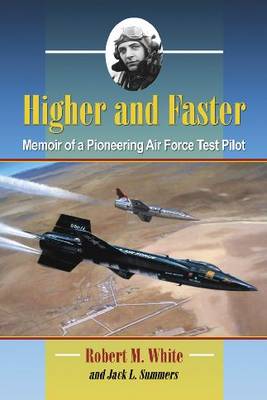 US Air Force Major General Robert M (Bob) White (1924–2010) was the man who, in 1961 and 1962, flew the X-15 sixteen times to a speed of 4,094 mph (just short of Joe Walker’s 4,105 mph record) and an altitude of 314,750 feet (59.6 miles), earning White his astronaut wings. After flying the X-15, serving in Germany, Vietnam, and Wright Field in Dayton, Ohio (where he was involved in new aircraft and weapons development programs), Bob became commanding officer of the Air Force Test Center at Edwards Air Force Base in 1970. In the Foreword, fellow test pilot and first man on the moon Neil Armstrong calls this book “a rare insight into the challenges of flying on the edge.”

Biographies of famous people doing cutting-edge aviation science are always fun to read—but biographies can be deadly dull or amazingly informative. This one lands in the middle. White, one assumes intentionally, removed himself a bit too far from the narration, so a feel for what he would have been like to meet in person is lacking. The writing is guarded on any topics that might offend anyone in the military, related civilian industries, or popular political organizations. This makes the book a safe read from a conflict point of view, but that makes it a bit pollyannaish from a historical perspective. Everything and everyone was “great” and conflicts apparently didn’t exist. The colorful characters of Scott Crossfield, Joe Walker, and all the others involved in the X-15 project come across as perpetually happy campers, all sweetness and light. Outside of a few hints, we don’t get any details on the bare-knuckle power struggles that every cutting-edge project generates, especially when highly competitive personalities are involved.

The constant reminders from White throughout the book that he was “not an outwardly emotional person” and that flying into the unknown beyond the edge of technical reality “was all just part of the job” become repetitive and in the end sound disingenuous. Not wanting to blow one’s own horn is, fundamentally, a virtue but White really was an accomplished and decorated aviator, military commander, and a leader in his field. He was inducted into the Aerospace Walk of Honor and the National Aviation Hall of Fame.

The most animated parts of the book involve White getting his P-51 shot out from under him on a low strafing run over Germany at the end of WW II (captured, escaped, recaptured) and his descriptions of twice breaking a windshield in the X-15 at speed (the windshield didn‘t blow out but partially blinded his view during landing). Beyond that, the book is more a story of White’s boyhood dreams of flying and, according to co-author Summers (a retired physician and university professor acquainted with White), “celebrates the realization of the American dream.” A laudable goal, but the overuse of that theme makes this book more suitable for young readers than adults who will have a larger frame of reference.

One proofreading glitch is annoying enough to deserve being called out: underneath the final poignant picture in the book, showing White being laid to rest in Arlington Cemetery, the caption lists the date as June 24, 2020 instead of 2010. Even without knowing anything about White, a proofreader should have noticed that this date is 10 years in the future.

Motorcycle Survivor: Tips and Tales in the Unrestored Realm »
« Jochen Rindt: The Story of a World Champion