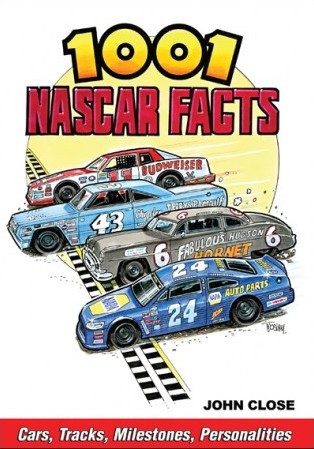 “1001” is not a figure of speech—there are exactly that number of entries in this book, and, in a sport almost seven decades old, there could have been thousands more!

This publisher has a whole bunch of 1001 Facts books and they all make for entertaining and often surprising reading, but don’t expect to ever find one those facts a second time except by luck or exceptional memory. Better leave yourself notes if you intend to start bar fights over items that some may call “trivia” but are anything but trivial: Youngest crew chief to win a Winston Cup (#598)? First African-American driver (#396)? Who was stripped of a win because his roll bar was discovered to be made out of . . . wood (#248)? Who fell asleep in the infield and got killed by a racecar (#220)? There is no Index (admittedly, not straightforward to do in this sort of book) and the book’s organization, here by decade, does not always offer enough of a clue where to look for something.

To illustrate the latter, consider one entry for reporter Chris Economaki, the “Dean of American Motorsports.” He’s listed in the 1980s chapter (#600), apropos of nothing in particular, in a half-page entry summarizing a good chunk of his six-decade working life. Who’d know to look for him in that chapter? (Unless it’s because it is the “media decade” in which Economaki became pretty much a household name.)

This is not meant as a criticism but merely to manage expectations. Speaking of which, NASCAR hounds may already have a very similar-sounding book lying around, John C. Farrell’s 2012 The Official NASCAR Trivia Book: With 1001 Facts and Questions to Test Your Racing Knowledge (ISBN 978-0771051128). Not much different in concept but larger and probably more geared towards a younger audience.

A key feature of Close’s book is that each decade is given a separate chapter (with its own introduction) that is then further divided into four sections: Cars, Tracks, Pit Pass, and Milestones. The third one is the least self-explanatory and pretty much covers all those bits that don’t clearly belong to any of the other categories.

Close is no stranger to folk who’ve followed the media side of NASCAR for a good long while. He did PR for Labonte, Hendrick, Petty and Ultra, and wrote for all sorts of magazines. But most importantly he is fan himself, growing up in a racing family and later working as a spotter in over 150 races.

Now, anyone whose interest in stock cars goes beyond watching cars zip around an oval knows that NASCAR history is shrouded in myths that steadfastly resist eradication. The sport’s origins in running moonshine, the role of the AAA, tussles between sanctioning bodies etc. etc.—there are some nits to pick here, but not because Close didn’t look deep enough or is knowingly sanitizing the story. In fact, the first chapter, entitled “BNR—Before NASCAR Ruled,” hits a lot of points other writer skip.

Really quite a lot of book for very little money!