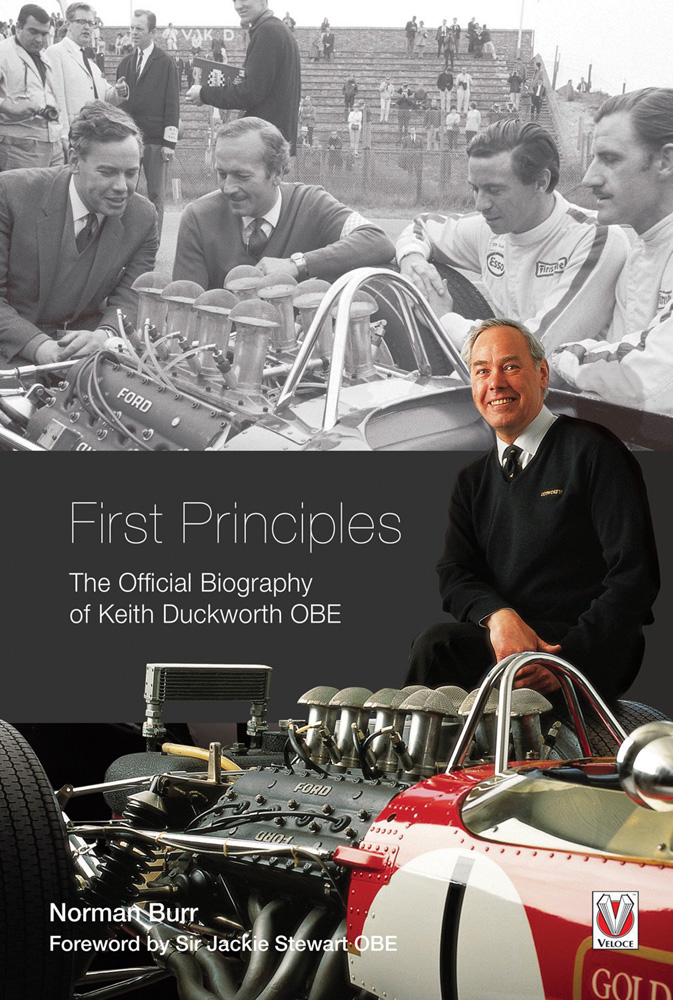 “It was his endlessly enquiring mind, acerbic wit and sheer force of intellect which made the difference. Many Cosworth employees stayed at the company for decades, some for their entire career, and in the process many reinvented themselves in roles they would never even have been encouraged to consider at a less open-minded company.”

“He was, of course, not a saint, and any biography which tried to present him as such would be doing him a disservice. If was he was wrapped up in a problem he could be distant to the point of being absolutely infuriating, and although he cared deeply about people and was generous with his time and money, he was not someone who effortlessly tuned in to the worries and concerns of those around him.”

It’ll be 10 years this week (Dec. 19) since David Keith Duckworth, engineer, died. The most successful F1 engine of all time is his brainchild and calling him an “engineer” is like calling Henry Royce a “mechanic” (although he did himself).

Even if you don’t know Duckworth (b. 1933) or the particulars of his varied life you’ll surely recognize at least one thing that literally has his name all over it, Cosworth, the famous engineering company whose name is a combination of his surname and that of longtime collaborator and friend Mike Costin. (And doesn’t the name, suggested by his girlfriend’s mother, have a much better ring than Ducktin which had been his idea?)

The two quotes above, printed only a few sentences apart in the book, pretty much stake out the spectrum occupied by the man whose work revolutionized a sport and changed an industry. They speak to a universal question (think Steve Jobs): is “genius” ever an acceptable excuse for arrogance and heavy-handedness? This book does not answer that, and so it must be remembered that this is an engineering and not a psychological biography. Burr often qualifies his comments in this regard by saying it was only fools and know-it-alls that drew Duckworth’s ire—which begs the inevitable comparison to an early stepping stone in his career, the mercurial Colin Chapman of Lotus. Duckworth is on record as thinking him “the brightest I ever met in conceptual thinking”—but also that “he told lies simply for intellectual stimulation.” Honesty, as a fundamental building block of life was a non-negotiable compass point in his life which is why he also said, “I think that borrowing money is the biggest immorality that there is. The more I think about life, the credit society, the more irresponsible I think it is. I don’t think the moral fibre of most people makes it possible for them to be offered lots of credit.”

This biography, then, should appeal to anyone asking Big Questions and not just engineering and motorsports historians. Moreover, Duckworth’s lifelong aviation interests—both he and his wife flew their own helicopters and he owned a microlights company—as well as his motorcycling and powerboating activities may well surprise readers as much as this acid-tongued man’s dedication to family life. (Readers who already know he was married twice will probably read with wide-eyed wonder of the highly unusual particulars.)

The depth of the aviation angle, in fact, surprised even the author even though that was the very first point of connection between the two in the 1990s. Already at that time, the possibility of a biography came up but Duckworth—one the one hand very full of himself and on the other diffident about what ripples his work made in the universe—wasn’t interested. That years after his death (the book has been in the works for 2½) so many people are still eager to share their experiences with him is a testament to his influence.

Jackie Stewart, in his Foreword, calls the history-making DFV (Double Four Valve) engine that took him to three World Championships the work of a genius, a sentiment Burr very much seconds. By the time you turn the last page of this book you too will have formed that opinion, which is why you will bemoan all the more the staggering consequences of Duckworth’s stubborn “I can do it better” attitude that resulted in a garage door repair putting him into the hospital one last time and, even if only indirectly, set in motion the events that ended his life.

Wide-ranging as this biography is, and as ”official” as it is (meaning Duckworth’s family sanctioned it), there are instances where the author doesn’t give the reader enough detail to keep disparate elements balanced. Case in point: how did the unassailably honest Duckworth decide in 1966 to restructure Cosworth so that he ended up owning 85% but his co-founder and two others only 5% each? Or sell it altogether in 1980 over the other owners’ objections?

Duckworth is a Brit and a national treasure so Burr impresses upon his British audience that Duckworth had an entirely global influence, particularly in the US where the DFV’s turbocharged derivative, the DFX, dominated Indy for over a decade. (The DFV racked up 155 GP victories to the DFX’s 151.)

In-text footnotes appear at the end of chapters; a lengthy overview of Cosworth projects is appended in chart form; the Index could be useful—if you can decipher the microscopically small font (ditto for footnotes).

The book is very engagingly written, utilizing many quotes and remembered/reconstructed dialogue. The photos are often rather small (the book is only 6.5 x 9.5″) but many are published here for the first time. Burr is a trained engineer himself and specializes in technical subjects (two books on microlights and the John Chatham bio Mr Big Healey) but the technical bits do not overwhelm the story. Even if the intricacies of, say, the effect of welding technique on pipe diameter or the arrangement of hinges on a helicopter blade hold no fascination for you, the man himself surely will.