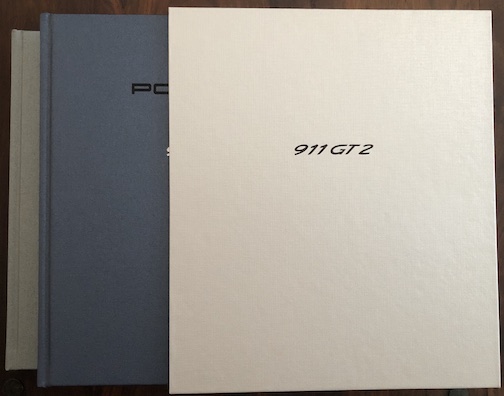 by Christoph Mäder and Jan Koum

“The significance of the 911 GT2 for the Porsche brand is greater than it is perceived today. The car coined a new model line within the Porsche portfolio. Every generation that followed after the GT2 had a GT2 or a GT2RS in its line-up. The focus of Porsche’s motorsport activities was firmly set with the GT2 on endurance racing closely tied to customer motorsports.”

Mention bolt-on plastic fender flares and people will think you’re talking about a cheapo homebuilt Special. But on the 993-generation of the iconic Porsche 911 this feature is the mark of distinction of the high-performance, lightweight, special-oder, hand-built, ultra expensive GT2 variant. Those fender flares are the most obvious exterior clue as to what you’re looking at—which makes it all the more amusing to learn that the bolts aren’t even functional and the flares are instead glued to the sheet metal quarter panels. Why start a book review with such a random odd point? To showcase the micronanosubatomic level of detail this massive 14-pounder 800-page book has on tap! 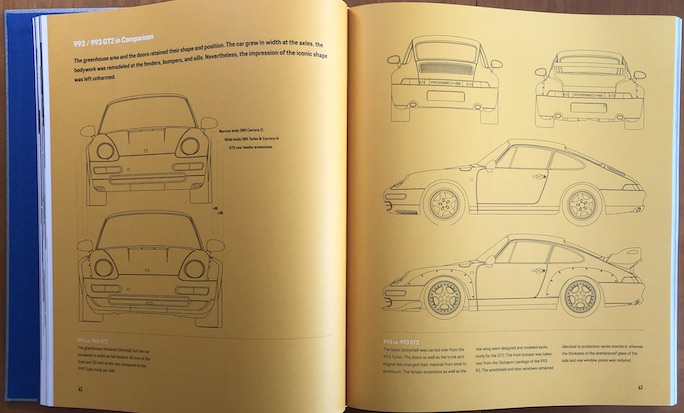 Santa must have driven really fast to get this book under at least a few Christmas trees in time for the big day. The lucky recipients were probably the ones who had the foresight to jump at the invitation to place pre-orders a few months ago. If that sounds like a long time to wait, hah. GT2 fans have been chewing their fingernails since March 2020 when plans for this book were first circulated, along with a call to 993 GT2 owners to make themselves known to the author. Unless you live under a rock you know there’s a pandemic on, which didn’t just make toilet paper hard to find but also printing paper. 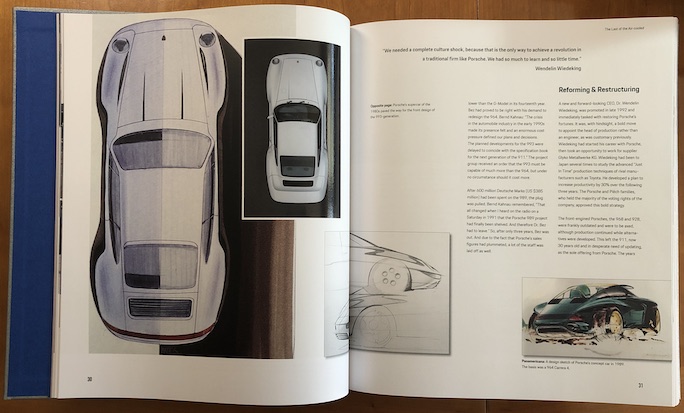 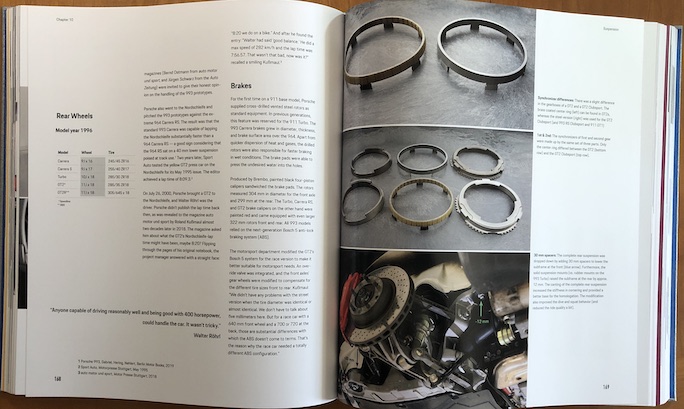 A sample page from the “Suspension” chapter. Expect to see this level of detail throughout.

So, who pre-orders a $460 book sight unseen? Anyone who recognizes Mäder’s name as that of the jack-of-all-trades at TAG Motor Books and, more specifically, a collaborator on the monumental 911 books by Georg Konradsheim in Germany and Ryan Snodgrass (who gets one of the copy editor credits in this one) in the US. These books are each a definitive, benchmark-setting treatment of related but stand-alone subjects. If you have all those gems on your shelf, hopefully well-used and not just as shrink-wrapped trophies, you’ve got it made. Which makes a segue irrestible . . .

Somebody who has certainly got it made is that other name on the title page. Do you use a smart phone? Then you probably use WhatsApp. That’s Jan Koum, and he is the money behind this project—but that alone would hardly warrant a writing credit. It is he who ran down all the individual chassis and then created a database while also taking an active role in shaping the text. He’s been into Porsches since that first clapped-out 924 he bought, an improvement over his Saturn SL but a long way from a collection that has grown to probably 100 cars in immaculate condition—including a GT2, but it isn’t self-indulgence that drew him to this project. Instead it is the desire to improve the Porsche community by entering into the record a proper catalogue raisonné in just the scholarly manner such a designation implies.

That a few chassis had to be left out is not for the authors’ lack of trying but simply because some cars have gone to ground or their owners just couldn’t be bothered. If the missing cars were to come to light, or the need for substantive corrections arise, the authors will do a second edition. The first one, incidentally, is limited to 993 numbered copies, the number being printed onto a metallic sticker that is inscribed with the buyer’s name. In the interest of getting the oft-delayed books to market expeditiously, buyers cannot request/reserve any particular number. 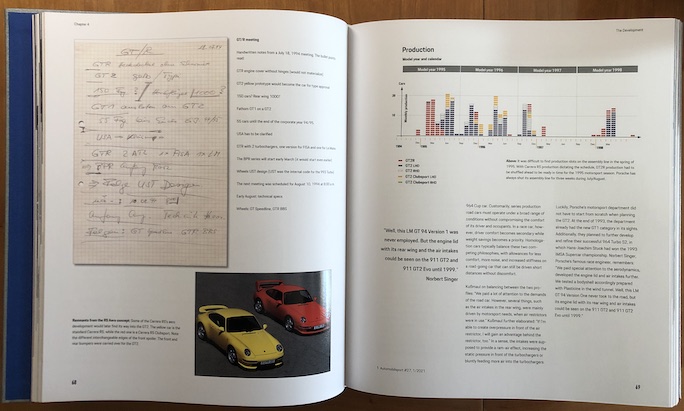 You can start arguments among Porsche folk as to which is the mightiest among the air-cooled turbocharged road-going 911s whose era ended in 1998. The only ones who would argue against the 993 GT2 would be those who have never driven one, which is easy enough to do as only 194 road and 78 race cars were produced. 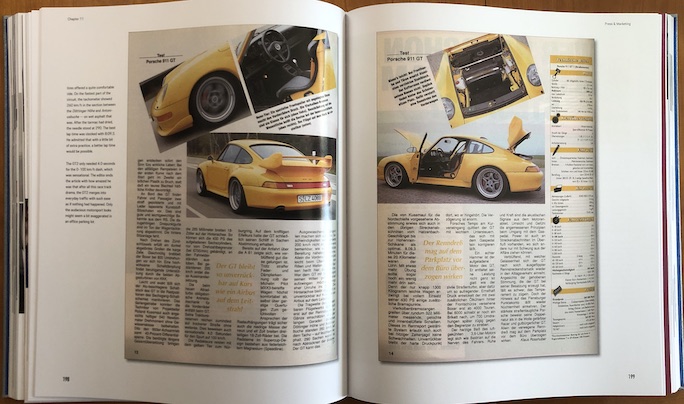 The road tests are all from German mags but the captions give highlights in English.

If you are new to this car, the very good Foreword by decorated German rally/racing driver Walter Röhrl is all you need to warm to the subject. Not only was he Porsche’s senior test driver for road cars and still is a brand ambassador, he has flogged every generation of 911 on road and track so his frame of reference is vast. 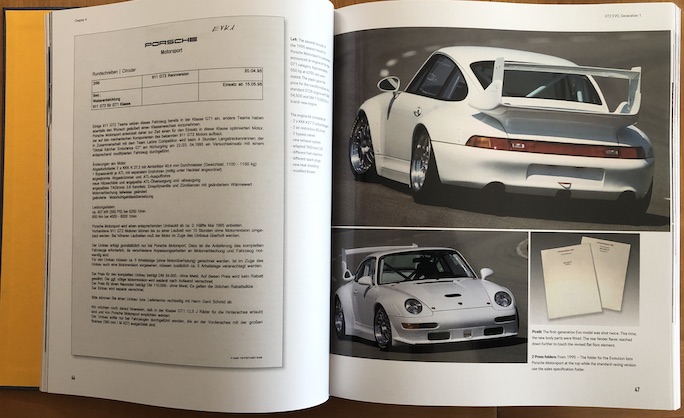 As if the GT2 wasn’t radical enough, there was an even more sharply focused EVO version in nine examples.

The book is divided into two stand-alone volumes (separate pagination, tables of content, and indeces [here called glossary but serving the same function]) one covering the road and Clubsports cars and the other the race cars.

To set the scene, vol. 1 offers a survey from the first 901 (1963) to the 964 (1988). What sets books of this caliber apart is that they not only tick off a plethora of data and dates, which is “easy” enough, but discuss them in the context of the factors that led to them (technological feasibility or often enough economic or regulatory realities) and that sort of analysis is easy to go off the rails—unless you can talk to the principals or consult their records. The authors did, and are able to cite many voices, often in lengthy excerpts. As to memos and such, the ones shown as facsimiles will obviously be in German but important detail may well be called out in English in the captions. Footnotes are conveniently located right on the pages on which they occur. 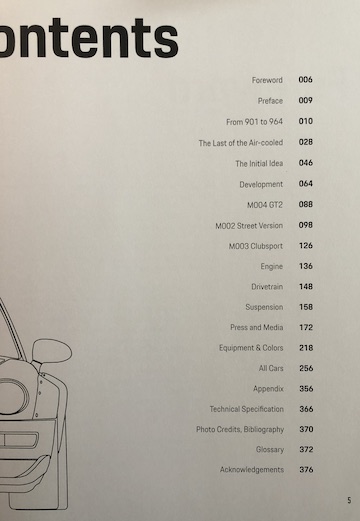 Vol. 1 ends with an explanation/breakdown of the various codes (VIN decoder, options, country-specific etc.) preceding a 100-page section of chassis descriptions in order of VIN. Naturally there are photos; detail shots are mostly provided by the owners and serve mainly a documentary purpose. This info will be of utmost value to any prospective buyer of these increasingly expensive cars (some going into the millions).

The book will answer questions large (cf. how racing regs affect equipment on road cars built for homologation purposes) and small (cf. was it always/only called “GT2”) and there is no merit in singling out further minutia here. Consider this book definitive.

From type size to column width (ragged right; what an improvement that makes on word spacing!) Mäder presents an utterly competent and user-friendly layout. 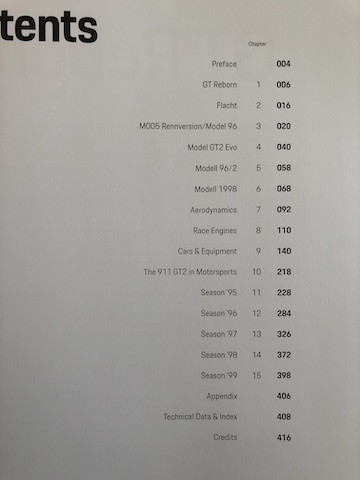 Photo reproduction absolutely must be singled out as the extraordinary effort it is. Recall that it was once SOP, except maybe in high-end art books, that photos were bundled into stand-alone sections, usually printed on buffered and/or coated paper so as to lend themselves to different ink absorption/color rendition than text pages that ought to have open pores in order to “feel” good to the hand and let the lettering be sharp and crisp. To achieve both, on the same paper stock, most modern books compromise one or the other—but Mäder went a different way: applying a varnish over only the photos and then curing it with a UV light. Talk about time-consuming, hence expensive! People who give a thought to the “engineering” side of bookmaking ought to be impressed!

Vol. 2 concerns itself with less than half the number of cars built but is even longer than vol. 1 because it covers the 1995–99 racing seasons in detail, including track stats and results, as well as an overall recap of Porsche’s history/interest in GT racing. How serious the fidelity of the data is being taken is evident in each volume utilizing different copy editors with their own specializations, including a former Porsche manager. 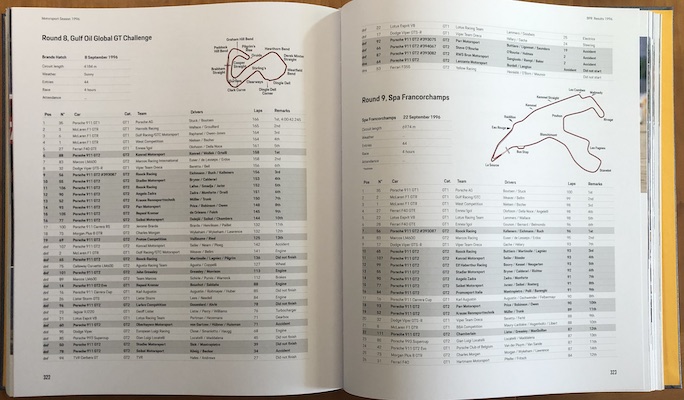 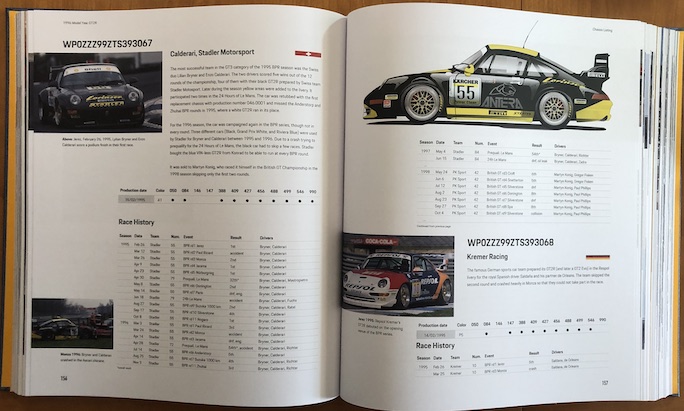 The individual race cars are presented by VIN, just as in vol. 1.

We say again what we have said about any previous Mäder-Konradsheim-Snodgrass books: the staggering, unquantifiable enormity of the research, the quality of the production, the dedication of all who worked on the book: it comes nowhere close to equating to something as mundane as “retail price”—be glad that there ARE people who take satisfaction in producing such work (and count themselves fortunate to break even)!

Need another reason to part with the dineros? Consider this: you’d be doing a good deed! The publisher will donate any profits to the same relief fund for victims of the catastrophic 2021 flooding in Germany (Aktion Deutschland Hilft e.V.) to which Porsche AG donated one million euros!

Overseas buyers are always anxious about getting a book mangled during shipping. This one is perfectly well packed in a custom box with built-in buffers.

This book is the first one Mäder has published under the new company name, in which the “RPM” stands for Rare Porsche Motorbooks. If that does imply Porsche books only (TAG did produce an Aston Martin book) then there will be much gnashing of teeth in other parts of the auto world!

by Christoph Mäder and Jan Koum