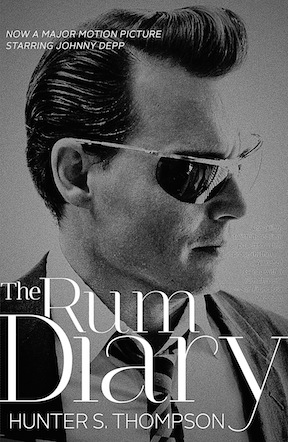 For their own recklessness destroyed them all—children and fools.

Good Lord—has it really been over seven years since Johnny Depp shot Dr. Hunter S. Thompson’s ashes out of a cannon commemorating a successful life (1937–2005) of folly, passion, genius, infuriation, and glee? The Rum Diary is the Doctor’s second book (his first, Prince Jellyfish, remains unpublished). Semi-autobiographical, it was written in the early 1960s describing and embellishing his stint in Puerto Rico in the late 1950s, but not published until 1998. A little Key Largo, a little Front Page, a carnival, a probable rape, a possible murder, intermittent sex, and a lot of booze.

After his 1967 Hell’s Angels, Thompson’s 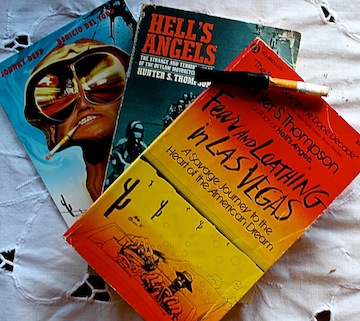 opus Fear and Loathing in Las Vegas was published as a novel in 1978. Thus it begins: “We were somewhere around Barstow on the edge of the desert when the drugs began to take hold.” Considering all that one could say about F&L, two things, for me, stand out: How amazing it is of all the novels translated into film, thousands probably, it is F&L that is closest to the possibility that a movie, yes, can translate the book nearly perfectly; and, two, that F&L can be read as an anti-drug screed.

But now to our shot of Rum. To say that it is more conventional than F&L is an understatement, and although there is in the book a faint foreshadowing of the later Gonzo-Style and even in this first novel we find one of Thompson’s favorite epithets, “swine,” he manages, here and there, to evoke a quality of tenderness. One example, unexpected: “They would hang in the breeze and make a sound like delicate glass bells.” Thompson here describes “choked-off hopes.” Don’t expect too much of this, however. Thompson’s hostile regard for most of the world outside of himself is still to be found in The Rum Diary—in spades. 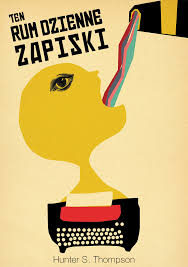 The story moves along like our hero’s—Paul Kemp’s—Volkswagen Beetle convertible carefully rumpling down a rutted road to a friend’s bungalow by the ocean. Dialog is crisp and believable, and Thompson handles first person reasonably well. A taste of Elmore Leonard is found in The Rum Diary, and it surely captures 1959. Much of the novel evokes slow, boozy contemplation, but the pace quickens and near the end leads to the excitement of unleashed pent-up rage and physical confrontation. Then comes flight and despondency. So, sure, buy it and read it. In its straight-forward prose, in the forthright telling of the story and in an innocence that the novel and the author are, slowly at first, sloughing off, it outshines much of the work that came after, F&L excepted, but especially the ESPN sports columns Thompson was hacking out in the early 21st century. Inevitably he became a parody of himself. The Rum Diary, then, should please both fans and foes of Thompson’s work. We haven’t seen the Bruce Robinson 2011 The Rum Diary movie yet. Always keep a little something aside for the next trip.