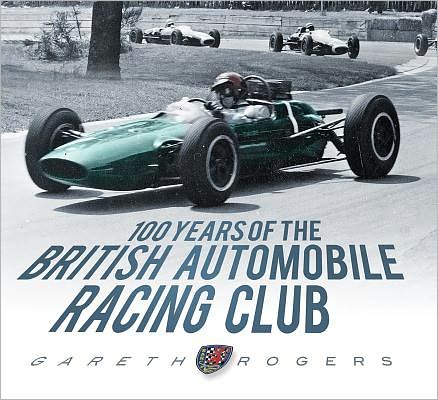 Big, round anniversaries such as centenaries don’t come around often, ergo there are limited opportunities to do books that commemorate them. Surviving one hundred years is especially for a business a truly major accomplishment and should be recognized with commensurate pomp and circumstance.

The gold standard for that sort of anniversary book is probably Elizabeth Bennett’s supremely opulent and painstakingly thorough Thousand Mile Trial 1900 (ISBN 0-9537930-0-1). Being a self-published effort, albeit with a deep-pocketed private sponsor, one should think that a commercial offering with official backing and proper publishing muscle behind it should easily reach similar heights. Not quite. This BARC history is a perfectly fine book and well worth the money, but its small size limits the breadth of its coverage. Moreover, especially in terms of the photographic coverage—more precisely photo caption detail—a truly lamentable lack of specificity must be noted. Is it really possible that the various archivists/historians/learned enthusiasts at the various tracks that have a part in BARC history weren’t able to identify cars, people, or even the year in certain photos? Or did no one ask?

Author Rogers is certainly not on unfamiliar ground here. As a historian he must know the tools of the trade, as a sports broadcaster he surely has contacts, and having written several motoring books—at least one of which with a similar anniversary theme (Mallory Park: Fifty Years at the Friendly Circuit. ISBN 978-0752438511)—he must have a sense for the sort of detail racing enthusiasts would expect. The BARC’s motto is “To be the Best” and so—having blessed the book as the “definitive history of the club, its race tracks, its character and its internationally-recognised prestige”—one must assume that it is just that.

For readers who just want a basic, concise overview of BARC activities, events, and tracks this book is just the ticket. It is engagingly written, covers the key points, and really does connect the dots. The two Forewords, one by BARC president Lord March (of Goodwood fame) and especially the second by chairman Guy Woodward, make clear how relevant still today the BARC is to advancing motorsports. Founded in 1912 as the Cyclecar Club it today not only operates in Britain but also overseas and owns the commercial rights to the British Touring Car Championship and the Ian Taylor Motor Racing School. From junior to pro level, the BARC runs its own races, sprints, and hill climbs and advises others internationally on how to do it. Rogers touches upon all these things.

Right from the first sentence his writing is lively and engaging: “The night of Saturday 7 December 1912 was windy, dark and wintry. Astonished cottagers in the winding Surrey lanes ran to their windows and threw open their doors so that the soft glare of oil lamps and firelight splashed on roadside hedges. . . .” You’re right there with them. Obviously, as the years unfold, the narrative becomes fact- and event-laden but still employs fully fleshed-out prose and maintains a brisk pace. While there are no new revelations, even the old hand will probably find enough memory-ticklers here to make an attentive read rewarding. Appended are 1955–2010 Gold medal recipients (awarded for “outstanding achievement in motor racing by British subjects”), a brief Bibliography, photo sources (the photos themselves are not credited, not even with a legend, so this list is rather pointless), and there is a short Index of people only.

We must one more time return to the matter of the photos but will first say that the following does not render the book without merit! There are probably hundreds, old and new, some quite likely new to the record, augmented with the occasional track map, race program, and assorted automobilia. Some of the period photos have been given a sepia tint that they surely don’t have in the original. While this creates an appropriate old-timey impression it is also a needless affectation, and in cases where straight b/w images are shown right next to them it has an almost jarring effect. Why not make them all one or the other?

The casual reader may not care about certain levels of micro detail but the reader with more specialized interests must be aware of this: maybe 15% of the images have captions on the order of “An Alvis” (p. 27). This may seem a bit imprecise, but count your blessings. The other photo on that page is captioned simply “Around the Brooklands banking.” Even that is enviably deep compared to the many variations on “Lining up for the race” (p. 31) when there is no way to even know if that photo has anything to do with the, or any, race described on that page/spread. Most times the photos do seem to be in synch with the chronology of the text but there are several cases where the age of the cars shown seems to predate the timeframe described. Then there are those photos that do call out the names of the people depicted (“Moss and Brooks” or “Clark and Chapman”) but don’t tell you which face belongs to which name. Or give you the name of one person (p. 50 “Dobson in the pits”) but not the other (it’s Earl Howe; if he isn’t considered prominent enough to be worth identifying, who is??). There are enough instances of this to irritate.

The Handley Page Victor: The History and Development of a Classic Jet, Vol. 2 »
« Soviet and Russian Testbed Aircraft