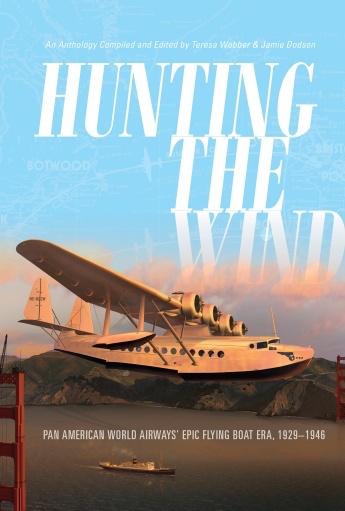 “Preserving history is no easy task. Big events that seem larger than life when they happen can become fragile when information about them is scattered and lost forever. Memories fade, facts blur, generations move on, seemingly insignificant items and documents are neglected or lost.”

Once the gold standard in civil aviation, Pan Am, defunct since 1991, may have been forgotten by the flying public but Pan Amers—former employees and often their families—consider themselves “a large, extended clan” bound together by what Newsweek magazine once called a company with “a living, breathing soul” that was unlike any other and “equivalent to membership in an exotic, private club.”

Heady stuff. Pan Amers have annual gatherings drawing hundreds, reveling in the memories of a corporate culture that to outsiders seems almost cultish. This book has a whiff of that—and it helps to remember that it was written by Pan Amers primarily for Pan Amers. Nothing wrong with that, except that certainly the tone (don’t expect any reference to the airline’s iconic glue globe logo as The Meatball [NASA’s is called that too, so big deal]) but also, to some extent, the fullness of the facts is a bit . . . constricted. One example, p. 32: “Alex Baldwin’s portrayal of Trippe as a verbose corporate bully in The Aviator was the antithesis of the real Trippe.” Yes, in that movie Trippe’s primary dramatic purpose was thwarting the key protagonist’s (Howard Hughes) ambitions, but no man wielding this much overt and covert economic and political power is a saint or remains one for long.

None of this diminishes Trippe’s monumental vision and savvy or the truly meaningful innovations Pan Am cooked up in every aspect of its business. Aircraft, logistics, celestial navigation (ever heard of a Howgozit Curve?), deal-making, codes of conduct, design—Pan Am was a corporate citizen that reshaped the world. A round trip ticket San Francisco–Hong Kong may have cost $23,350 ca. 1938 (one contributor who was a flight engineer on the Clippers reports making $154/month) but, in time, PAA did bring global air travel to the masses.

Speaking of design, this book is blue-blue-blue, PAA’s official color, but it makes for hard-to-read text as blue on white or vice versa is low-contrast, often to the point of blurring the type. 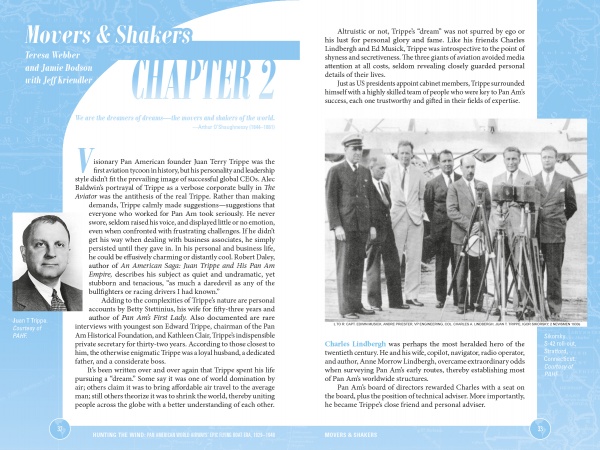 From the first mail run to Cuba to sending out crews by ship to build seaplane bases, from the Lindberghs’ scouting trips to the Wake Castaways to the Black Sheep, the book informs and entertains. It is, properly, an anthology, written by 15 contributors with Pan Am background and quite a number of them are authors of their own Pan Am books. Everybody’s heart here is in the right place and even readers who would quibble with that will have to concede that on the factual level the book does offer some new morsels (not easy, as the PAA literature is vast, with new books coming out pretty much every year) and certainly on the personal level there are many “moments” that really do illuminate why Pan Amers think so highly of their airline. In that regard, it is rather regrettable that most of the photos are positively tiny, and the book itself is only 6 x 9″ anyway. 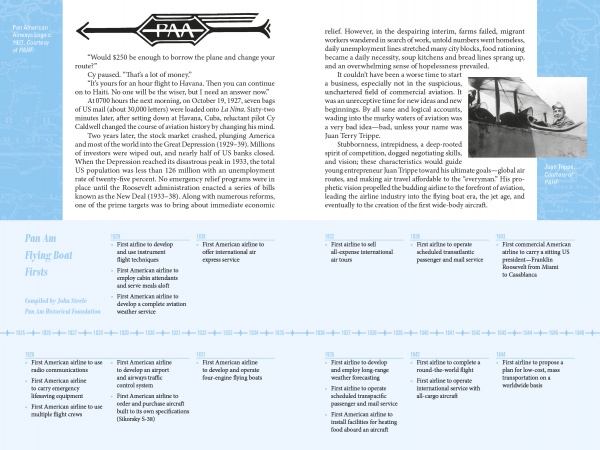 That the book focuses on the relatively short-lived era of the majestic transoceanic Flying Boat is only natural as it is there that the key formative moments occurred. Only at most a 10th of the corporate documents that became homeless after Pan Am shut down have been saved, and of that small number an even smaller quantity has found its way into the published record. In other words, more to come. And why not?

The book ends with a brief survey of the boats by maker/type and serial number, and there are Chapter Notes, a Select Bibliography, and an Index.