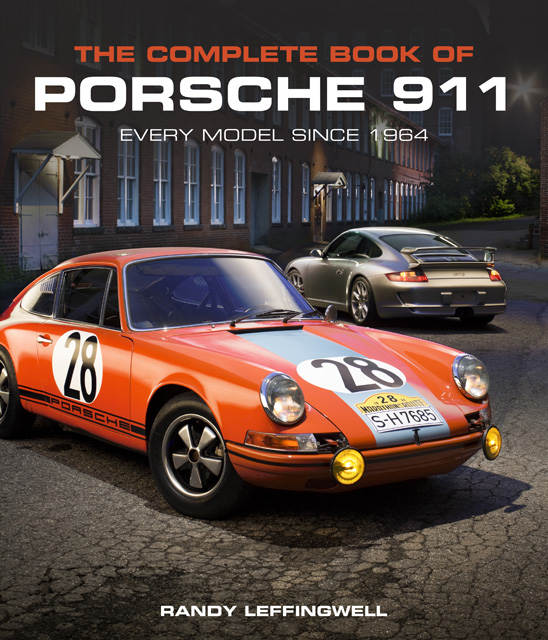 You only have to look at the front cover to appreciate that Porsche’s 911 is one of those cars whose shape is so familiar that even if you’re not a car person you recognize it at a mere glance, out of a corner of your eye on a dark night. It’s only when you stop to think that this iconic shape has been around for over fifty years that you realize just how well Porsche understood the sports car idiom right from the start.

While the basic shape connects the current models to the first, not much else does—and thank goodness for that. Early 911s had a well-deserved reputation for getting overzealous drivers into trouble by hanging out their tails under braking into a bend. (Curiously, this aspect is not at all covered here.)

You could fill a bookshelf with just the Porsche books by marque expert Leffingwell. Here he offers a model-by-model overview of each production year, and not just of road cars but also factory racers, prototypes, and special-production cars. If a 911 is in your future, especially an older one, don’t go shopping without having read this book first and understand what makes one year different from another. Also, anyone with an interest in the lifecycle of a nameplate, of what makes a car last in terms of consumer acceptance and technical relevance, will find in the 911 story an uncommonly focused and successful application of an idea. (Compare, for instance, to Mustang or Corvette.)

Each of the now six generations of the 911 is given its own chapter except that Gen 1 requires two because it spanned such a long timeframe. Since the creation of the 911 didn’t take place in a vacuum, the Introduction takes a look at the predecessors (specifically the 356 line) back to 1948. Presumably for effect, all the photos in this section are reproduced in b/w even if some were originally in color.

The pleasantly readable text strikes a confident balance between sweeping overview and detail. Even such a useful data point as purchase price (in DM and often in $) is made more useful still by relating it to the price of other consumer products such as a loaf of bread. The photo captions are very thorough and dispense with a large amount of the sort of specs (weight, dimensions etc.) that would only have interrupted the flow of the body text. For select models extensive data panels are provided, the data being sourced from such standard reference works as the Porsche Data Book (Haynes) and the Porsche Red Book (Motorbooks). The 911 is obviously available worldwide and while different equipment/spec levels are discussed, the focus is probably more on US-spec models.

Most of the photos are large; all are well reproduced. Why so many of the modern photos are rendered in b/w is not clear. Not routinely seen in books like this are such interesting cars as the one-off Bertone-bodied prototype and the four-door 21˝ stretch 911 by racecar builder Troutman & Barnes, both from 1966/67.

Given Leffingwell’s connections to the factory and his role on the enthusiast scene (he is Historical Editor of the Porsche magazine Excellence) it is no wonder that Porsche’s museum and archive folks have contributed to this book and that people from the Porsche club world have vetted/reviewed it. Leffingwell is as much a writer as a photographer and many of the photos used here are his, supplemented by several dozen from other sources. While these sources are listed in an Acknowledgments section they are not correlated to page numbers and the photos themselves show no credits.

At first glance the Index looks satisfactorily deep—most of the names and keywords you’d expect to see are there. While tailoring it to fit an even two pages probably accounts for the fact that some objectively useful entries had to be omitted (cf. Beutler coachworks, which is mentioned in the book) there is simply no good reason to take the space to list an entry but then not give every occurrence of it in the text (cf. Reutter coachworks)! On the plus side, the Index spells correctly the proper names that the text butchers (cf. Reimspiess).

The book design shows many clever touches that only look simple until you observe and compare how well certain recurring design elements work under different conditions.

There is a vast amount of 911 literature for every interest and wallet; this one is a solidly worthwhile acquisition.