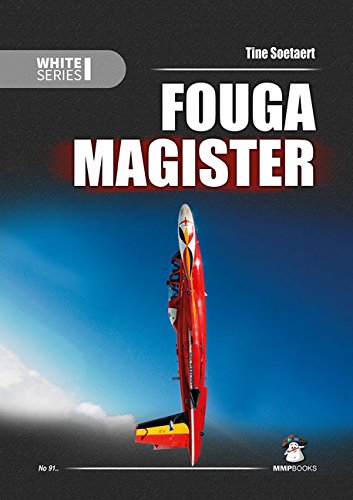 “As there are no ejection seats, both pilots wear a seat-type parachute. To escape . . . the pilot then has to slide out of the rashockpit and under the wing. After the front pilot has left the aircraft, the backseater can eject his canopy and escape by sliding over the intake and down the wing.”

Right. Ever tried “sliding,” on a jet, in flight? Up there, in the wild blue yonder? The drawings in the manual illustrating this have helpful arrows just in case you’re not clear which parts of the aircraft you’d want to avoid hitting. Or, you could simply invert the plane and “let yourself fall out of the cockpit.” Is this the sort of thing that inspires confidence in the world’s first purpose-built two-seat turbojet-powered trainer aircraft??

Strictly speaking, the words “mass-produced” should be added to the preceding sentence because the Fokker S.14 Machtrainer came a year earlier but only 21 were made. At any rate, the Magister was Fouga’s greatest success (in Soetaert’s understated prose, “Despite the crash of the first prototype on a test flight, the results were very encouraging and the program went ahead.”), built under license by several countries and flown by numerous air forces and aerobatics teams.

One would think that an aircraft this competent, well-behaved and even pretty would have a large body of literature attached to it, but it is not so. This latest book offers a fantastic amount of micro detail about technical and functional aspects of the machine proper but is rather too brief in regards to background or context. For example, the author does explain Fouga’s experience with gliders, which is so evident in the Magister’s shape, but little is said about its most obvious and distinctive feature, the V-shaped “butterfly” tail.

And speaking of the author, nothing at all is said about her. This is a cardinal flaw in this publisher’s books because it gives the reader nothing by which to gauge a writer’s competence. In the Acknowledgements, Soetaert allows that “this book is the culmination of more than 10 years 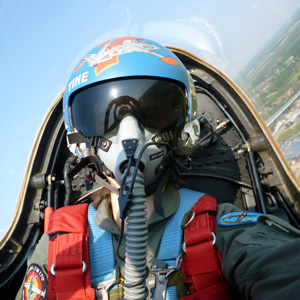 of working on and with Fouga aircraft” and that it is her “love letter to a machine.” On and with? Who IS she?? What reader wouldn’t perk up if they were told that upon seeing Magisters perform with the Belgian and Irish aerobatics teams she joined the Belgian Air Force demo team herself or is nowadays involved with the Belgian firm Magister Aviation that is dedicated to preserving Fouga heritage and offers consultancy services for everything related to the Fouga CM.170? This is exactly the sort of person who should write a book like this, so why not state her credentials? One thing that is obvious enough is her sense of humor: the intro ends with the words, “No crew chiefs were hurt in the making of this book.” (But many of them, and other colleagues and enthusiasts helped.)

After all of five pages devoted to backstory and development the book goes full bore into technical minutia in regard to specific systems and assemblies, accompanied by close-ups 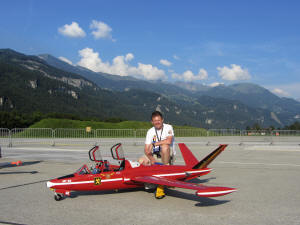 and tech drawings followed by several pages of dimensioned, super-detailed 1/72 and 1/48 3-views by Philip Avonds. He runs the Scale Jets website that offers RC aircraft (including custom builds), scale plans for all sorts of aircraft, and  assorted news.

The next 40-odd pages present Magister variants, a few photos of the assembly from different facilities, and then a quick overview of countries (in no discernible order) that operated and/or built the CM.170 augmented by Chris Sandham-Bailey’s color profiles. From psychedelic Salvadoran to camo Togolese, and the Israeli aerobatic team to the Patrouille de France, modelers will find much to give them fresh ideas. And they, as well as restorers or the aforementioned crew chiefs will get a kick out of the remaining 60-some pages that offer a photographic tour of the aircraft. Everything is captioned and with mostly sufficient detail although there are some instances were Soetaert is a bit too much the expert’s expert and occasionally neglects to point out things that can easily throw the newbie, such as what side of the aircraft or orientation we’re shown. Both cockpits are illustrated, including diagrams with legends.

Quite a number of Magisters are in private hands; if you want one, Soetaert can set you up! But remember a quote from page 11: “The Magister is very much a hand-built aircraft. This means that many parts are aircraft specific. For example the nose landing light cover, tail strake covers, canopies, etc. do not fit another aircraft without adjustment or alteration.” Pretty quirky for an aircraft of which almost 1000 copies were built. Nothing quirky about this book which is as solid as pretty much any of the vast number of titles this publisher offers.