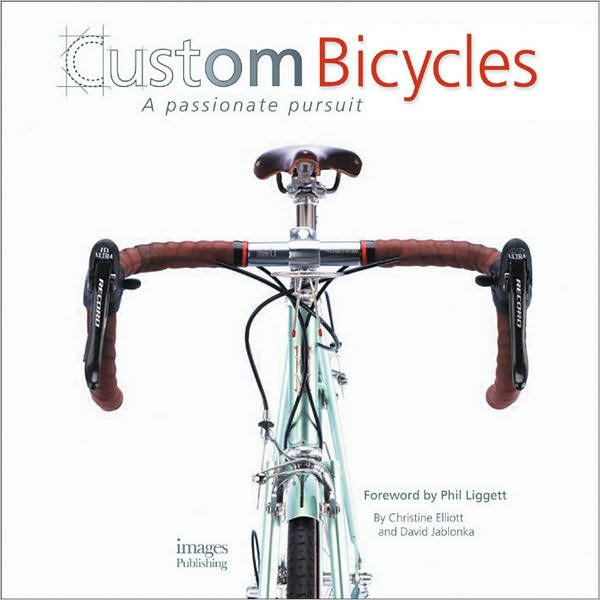 If you have never had the pleasure—and the surprise—of picking up a full-size bicycle using literally just one finger, you just don’t know how far bicycle-building has come in the 150 years of its recorded history. And unless you are a pro rider (or go downhill, if you have nerves of steel) you’ll probably never experience another surprising reality: modern superleggera bikes can exceed 100 miles an hour!

Even though this book is written by a bicycling couple from Australia who think nothing of packing up their bikes to explore the world, a fresh sense of wonder, joy, and satisfaction at all that a bicycle can do permeates the book. Even the Foreword by Phil Liggett, veteran racer and Tour de France English-language commentator for 37 years, is positively bursting with energy. To his mind, the bicycle frame builder—“with nothing but a blowtorch and a vision”—is that rarest of men (come to think of it, there are no women builders in this book!) who not only creates but does good. And their work, in Liggett’s words once more, is “laid bare here for all to see and scrutinize.”

This is not a how-to but a who-is book. You’ll get introduced to the builders, who they are, what they do, and where they work. In a few, too few, cases you’ll even get to see them. The back cover contains a qualifier that may well be important to some readers: the book showcases examples from Australia, France, Germany, Italy, the UK, and the USA. Obviously there are builders elsewhere in the world but the authors have confined themselves to writing what they know about and to shops they may have even visited themselves in the course of their globetrotting. And even with that caveat there are surely readers who will feel strongly that this/that/and the other should have been included. No point in carping about that . . . although it would have been polite (to those who do good work but are not included here) if the authors had devoted a few words as to their criteria.

To the newbie, this book will serve as a nice introduction to a topic about which there are not many books. To the more dedicated rider the commentary will probably lack depth (also: no specs, except for the frame material). Even though there is little text there is quite a bit of bike-speak jargon—but no glossary.

Each of the 39 builders (all their websites are listed at the back) is covered in alphabetical order on 3–6 pages, half of them photos. The text seeks to communicate their inspiration, philosophy, background, and work style/habit. Often there are quotes by them, sometimes also their customers. The photo captions are exceedingly sparse, if there are any at all. Consider: the most exotic bike shown here has a bamboo frame and bullhorn handlebars but neither the general text nor the photo captions draw attention to it! The danger here is that the very thing the book seeks to celebrate—craftsmanship, originality, customization—may go unrecognized by the viewer. It is unkind to say, but an inevitable impression to sneak up on one, that if these builders had promotional brochures, this is the sort of thing they’d put in it. This is a nice book and shows pretty, and pretty unusual, things but does it do its subject, and its cause, a service?

Each entry lists the builder’s country, something that could have been usefully mentioned on the Table of Contents too. The book does not explain it but one may deduce from the detailed photo acknowledgements that the builders submitted, and/or took, their own photos. This would account for the distinctly different photo styles and, to a lesser extent, quality. Presumably the authors gave the builders some sort of guideline as to the type of shot they envisioned and while there is a certain lack of visual continuity, this “patchwork” approach isn’t too jarring. There are as many photos of individual parts or assemblies (what insights thorough photo captions could have given here!) as there are of entire bikes.

Readers who actually know some these builders’ work will without fail note that the photos do not in all cases show their most representative, “signature” work but whatever happened to be on the floor the day the photo was taken. Nothing, incidentally, is said about pricing. US readers should know that there is something called NAHBS, the North American Handmade Bicycle Show that brings together builders from all over the world.

To quote Liggett once more, “You will love browsing through this book, even if you have little or no interest in cycling.” You will indeed. The bikes are pretty to look at, no doubt, and the book has good intentions—but in the larger scheme of things one wishes it told a bigger, better story.