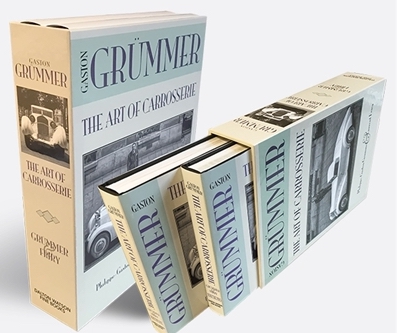 “Once again Gaston Grümmer demonstrated his advanced ideas, but, in reality, the entire individual coachbuilding industry was in danger. When Gaston, at his height during the 1931 Paris Salon, wrote an editorial in La Carosserie entitled ‘The Future of Coachwork,’ he did not imagine that he also was at risk and that one day his profession would disappear.”

Active for just about 15 years (1924–39) this French coachbuilder had a significantly large output of an estimated 600+ bodies but with only 10 or fewer surviving you may never see one in the wild. And none of those are the breathtakingly futuristic styles of which so many variations are shown in these pages.

Grümmer, just to get it out of the way, also bodied utility vehicles from taxis to ambulances and even armored cars, and on the passenger car side he bodied everything from lowly Fords to highfalutin Rolls-Royces. Clearly, Grümmer deserves to be more than just a footnote in the history of coachbuilding. The fact that he was, before this book came out, is probably because the Grümmer works had no successor after they shut down and whatever records survived through the ages were too few and scattered to yield a full enough picture to invite a reappraisal. Until  . . .

Until Gaston Grümmer’s youngest son, Philippe-Gaston, came across a forgotten trunk—in an attic, dontchaknow—full of such material. Neither this book nor other reports in the press really talk about the what/where/when. Buried in Vol. 2 is a remark that the financial registers and production books did not survive, which, if they had, would surely make for a much less sexy book than the piles of coachwork drawings and attending notes that make up the bulk of what is presented here.

To digress for a moment: this publisher, Dalton Watson Fine Books, has in recent years produced landmark work on the subject of European coachwork. Aficionados had not had it this good since the original Dalton Watson company of the 1960s put out photographic coachwork compendia that to this day are cornerstones of any decent automotive library. Those old books are light on narrative, the new ones are all about narrative, context, background. Sometimes, ahem, too, too much. We won’t name names. Now, this book was written by French authors—and there really is such a thing as Gallic Restraint, a low-key, stripped down, clinical approach devoid of fluff and frill, speculation and psychoanalysis. (Mind you, Gaston Grümmer’s bio does have enough drama to go that way!) Dandy, but it leaves the reviewer precious little to analyze, hypothesize, criticize, especially if the reviewer is able to resist the temptation of instead writing a book report, that meaningless exercise of retelling everything the book is about. (A cardinal sin that gets you fired around here.)

In short, the book is its own best advocate, ticks every box of good writing, clear organization, purpose, relevance, proper research, good 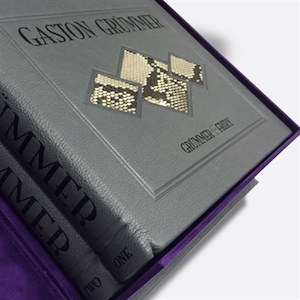 apparatus. Add to that attractive design (and here we will name names: Yeah, Jodi Ellis!), landscape format that lends itself so well to coachwork drawings and photos, a perfectly standard price point for a work of this scope and presentation, an ultra-luxe version—$1800, gasp—with snakeskin trim (you’ll have to read the book to know why) and even the bibliophile completist who’ll never actually read the book will be happy to have it on the shelf.

A few practical notes: the two fairly evenly sized volumes are consecutively numbered, which mainly means the Index is at the back of Vol. 2. Each year of production is discussed separately, vol. 1 containing 1924–33 (plus the biographical material) and vol. 2 1934 and 35 plus data sets such as chassis and drawing lists, over a hundred pages of drawings, and ancillary material such as catalogs/brochures, concours appearances/prizes, and the apparatus.

If it was in the trunk, it’s in the book. Not everything was in the trunk so if it couldn’t be sourced elsewhere, is not in the book. Still, who could realistically want for more? There are no glaring gaps that resulted in ambiguity; yes; some bits had to be extrapolated from other bits—but this is the fullest account there is, and, really, the only one.

As to the research, seeing the name of automobile historian Laurent Friry on the cover is really all you need to know. His award-winning writing has enriched the body of knowledge—and it never fails to surprise to be reminded that his day job is in an entirely different racket, telecommunications engineering. Grümmer is a retired commercial real estate developer.