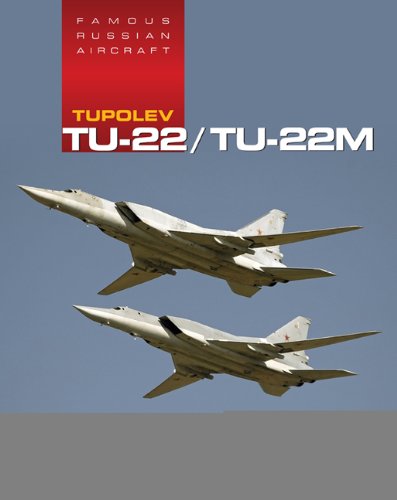 “. . . in the early days the Tu-22 was loaded with so many operational limits that pilots carried 96-sheet office books for recording them (and instructions on what to do if something failed)!”

One must pity those readers who may have failed to notice this book simply because the subject matter didn’t jive with their interests. Any aviation enthusiast and particularly any flyer would get a lot out of this book—just ponder the quote above.

Beautiful as it looked, especially in flight, this complicated aircraft demanded so much of its pilots that its loss rate was abnormally high. Imagine at supersonic speed applying right rudder and the aircraft rolls—left! Above Mach 1.4, a wing may drop to one side and the only way to maintain level flight is by aileron input. Coming in for a landing at the normal approach speed of 320 km/h (60 km/h faster than anything else!) you ease up on the throttle—and the nose pitches up so much you don’t see the runway any longer. A long, long list of peculiar flight behaviors and also service complications gave this machine a bad rep that only got worse in the telling.

This book sorts all that and much more out. From cockpit glazing to politburo shenanigans, you’ll get a very detailed, balanced, engagingly presented and supremely well illustrated account. Even if you’re already deep into the Blinder and Backfire literature you’ll be reading this book several times before all the nuanced new bits are internalized—which will make you curse even more that the book has no Index!

If you’ve been around Soviet/Russian aviation history you know that it seems as if every “Wings of the Red Star” video was narrated by Peter Ustinov—and nowadays every decent book on the subject is written by Yefim Gordon and his various collaborators. The ones in this publisher’s “Famous Russian Aircraft” series alone number eleven; they’re at the higher end of the price spectrum—but they’re worth it!

Gordon (b. 1950) has been at it for 40 years or more and nowadays is Executive Director of the Moscow-based aviation publishing house Polygon Press. He owns and/or has access to one of the world’s largest archives and as a widely published professional aviation writer he obviously has a commanding grasp of the existing literature. It is certainly true of this particular Tu-22 book that it contains more than any other on this already well-covered aircraft.

The book could easily have been two separate volumes on two separate aircraft. Other than being designed by Tupolev (the “patriarch of Soviet heavy aircraft design”) and for similar roles there is no direct connection between the two although there is, of course, Tupolev’s evolutionary approach to aircraft design in evidence (“If an aircraft is 70% new it is a guaranteed flop!”). 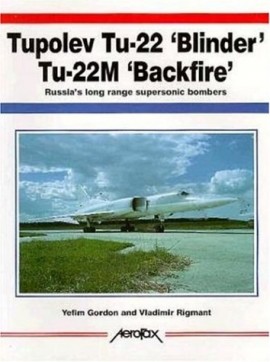 The reason they are bundled here is because Gordon had applied that approach once before, in 1999, in the meager 96-page softcover Tupolev Tu-22 Blinder, Tu-22M Backfire: Russia’s Long Range Supersonic Bombers (with Vladimir Rigmant, ISBN 978-1857800654). While the new book is in every regard more, the line art in the earlier one is actually better (the Tu-22 illos are from the old book and the Tu-22M ones new).

The story of these two aircraft along with that of its contemporaries and predecessors must be read against the backdrop of the global strategic picture in the 1960s, particularly the emergence of ballistic missiles. Highly specialized books like this are not bought by casual readers so it is a point of praise not criticism to say that the book is brimming with data, not just performance data but type and variant numbering including corresponding NATO names/numbers, all sorts of abbreviations, and also lots of Russian nomenclature (all explained and even with pronunciation aids).

Noteworthy are the many quotes, photo captions of exemplary detail, and the inclusion of technical drawings and diagrams as well as b/w sideviews and color profiles (also some nose art, rare on Soviet military planes). Folks who collect factory-made aircraft models (mock-ups, design studies, promo models etc.) will hyperventilate over the many photos of such goodies that for all practical reasons might be made of Unobtainium.

If you read the book sequentially you’ll find that tables of specs and the like are placed in just the right spots to work with the narrative—but as there is no Index and the Table of Contents lists nothing but chapter titles that are more about being cute than precise (“The Tu-22 That Wasn’t . . . Or ‘M’ Is For Misinformation”) you’ll be struggling to find a specific data set later unless you flag it as you go along. No biggie but not helpful to the power user.

If you have any of the earlier Tu-22 books you can retire all but the Burdin/Dawes tome; it has lost none of its utility (but is much more Spartan on the illustrative side) and, in fact, Gordon credits Burdin with having “provided valuable materials.”