SuperFinds: A Truly Unique Selection of Previously Unseen Photographs of Important Historic Cars As Found in the 1960s And 1970s 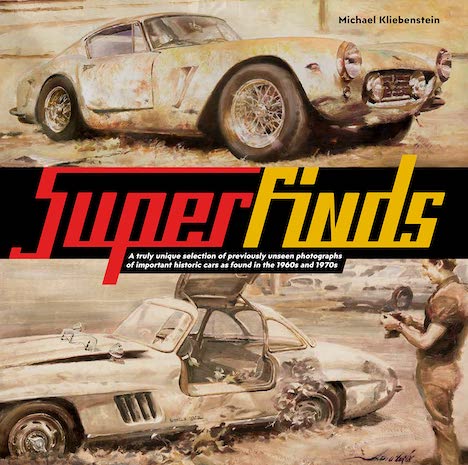 “At times, even Corrado was amazed at what he had discovered so many years ago!

Sifting through all this astonishing material, my initial thought was to present all those historical images of very important and significant automobiles to the classic car world for research.

I believe some of the images will shed new light on the originality and historical significance of some of the most important cars that are now exhibited in museums or forever locked away in famous collections all over the world.”

Hundreds of period photos, not previously published, of cars (also some parts, boats, and other bits) in their original “as found” condition, from many corners of the globe—color us excited.

Cast your eye on this book from a distance and you would assume its imposing heft signals “art book.” Well, what’s in it certainly qualifies—at least for those who can look beyond rust and dents. Speaking of art, the cover images definitely are. You’ll probably have to look twice to recognize that the vintage-looking photos are in fact paintings. They are based on photos included in this book, and you will have to take many, many more looks to spot all the differences between Alfredo de la Maria’s renditions and the original photos. Depending on how successful this exercise is you will then be unable to resist speculating why an internationally renowned artist known for accurate detail work (as automotive-minded readers will be aware, he has partnered with the Festivals of Speed since 2017) should take such liberties, and you’ll probably expect the book to shed light on it. Aha. Take a number—there are several mission-critical bits the book, which only contains minimal text in the first place, leaves vague. 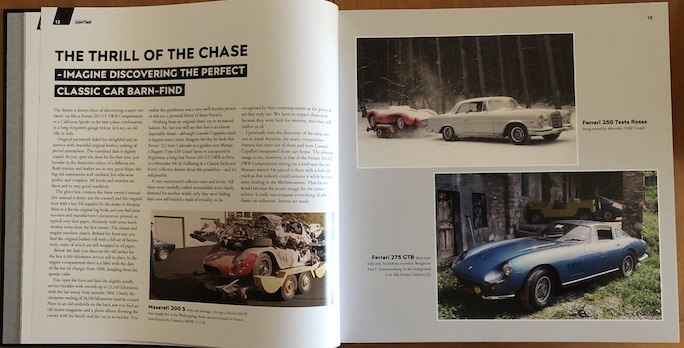 Preceding some 400 pages of photos, photos, photos this short section is one of four, all with tantalizing titles—cf. “Discovering the Amazing Archive”—that leave rather too much undisclosed.

Take, for instance, the fellow without whose photos there would be no book, Corrado Cupellini of Italy. In certain circles his reputation precedes him. Here he is described merely as a gentleman explorer, a car enthusiast, and—we’re getting warmer now—a car hunter. We learn that, fresh out of university, he interns in the oil industry, which involves travel which leads to chance encounters with cars that catch his eye, not because he knows them to be important, rare, collectable (none of these criteria had any practical meaning in the 1960s) but simply because he likes something about their appearance or circumstances. 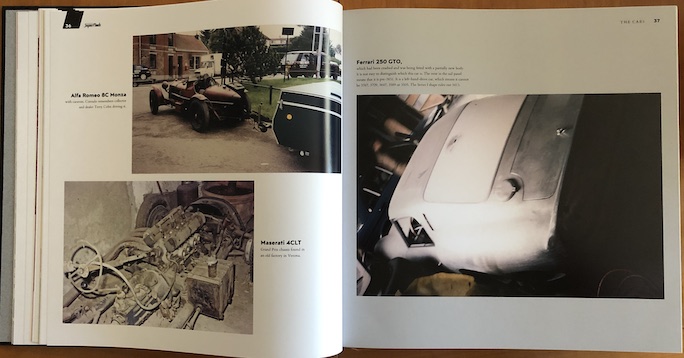 The imagination runs wild . . . a today priceless 8c Alfa towing a caravan . . . a mystery Maserati GP chassis way past its prime . . .. That the Ferrari 250GTO has such a comparatively long caption, bristling with forensic analysis is no wonder: seemingly every cotter pin on every chassis has been cataloged. That’s how it goes when you’re dealing with 8-figure cars! 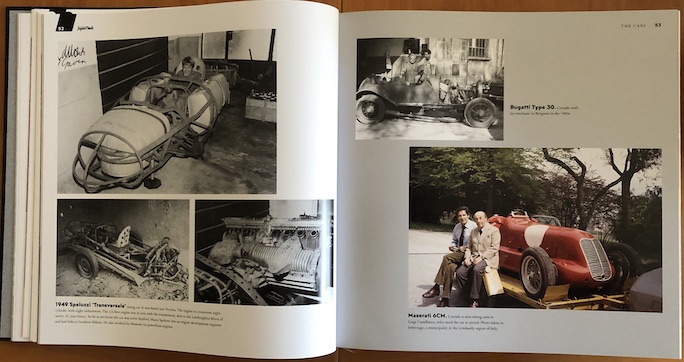 Ever heard of a Speluzzi? Honest now.

Colleagues, also in the oil industry but on a global scale, give Cupellini leads. The next thing you know he is traveling all over the place, buying cars, shipping them to Italy, having them restored—and selling them (sometimes first racing them and then selling). Inquisitive minds would want to know: on whose dime does all this happen? How often? Is he acting as scout, broker, representing collectors, running his own used car business? There are answers to all of this this, but not here. 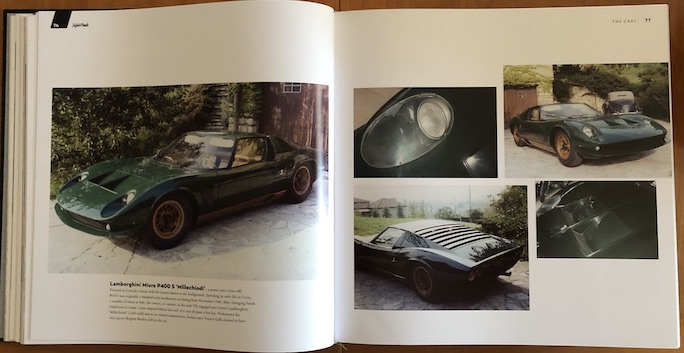 A Miura, big deal—but this is a one-off! 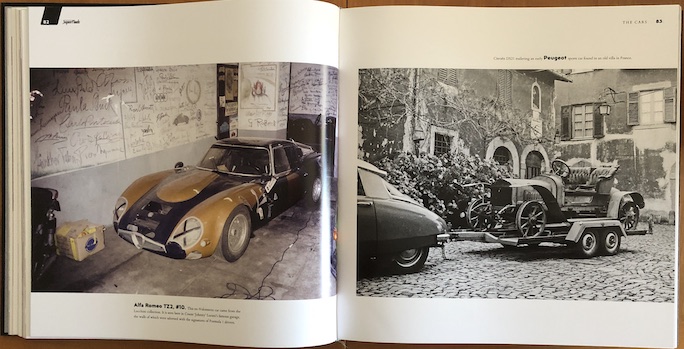 The car on the left is plenty interesting, but it’s the WALL behind it that is the star here. This is Count “Johnny” Lurani’s garage (Cupellini was in partnership with him, another thing the book says too little about) and its walls were famously inscribed by all manner of racing greats.

You deduce from the introductory quote that Cupellini would have had to have been alive to go through the thousands of photos author Kliebenstein “discovered” in a “discarded archive” in an old house in 2016/17. Why was it discarded? How did Kliebenstein get the gig? And what is his connection to Cupellini anyway? (Buried in the Acknowledgments at the back of the book is one remark, that they are “good friends.”) Again, there are answers to all of this this, but not here. 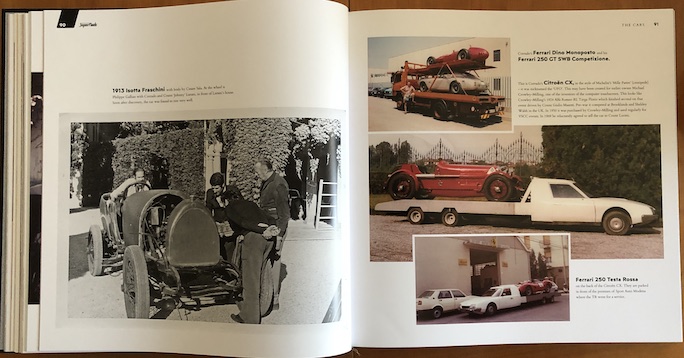 Cupellini had an eye for interesting cars—even his tow/transport vehicles are interesting. 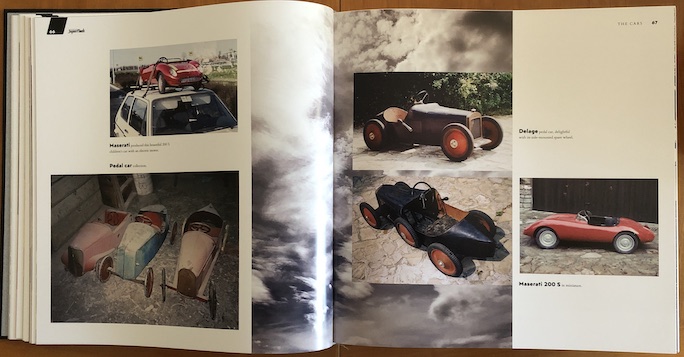 There is no question that Kliebenstein is an ardent and knowledgable auto enthusiast (fresh out of school he was as teenaged prop master on German movies tasked with sourcing suitable 1920s/30s cars and today he advises high-end collectors). His multi-faceted career revolves around information-sharing (film/tv, magazines, books) and opinion-making (political work for campaigns and governments); moreover, he shares copyright for the book with a publisher rightly known for crossing T’s/dotting I’s. So why all this vagueness, unless it is intentional? Avoiding it would have made a good book better. 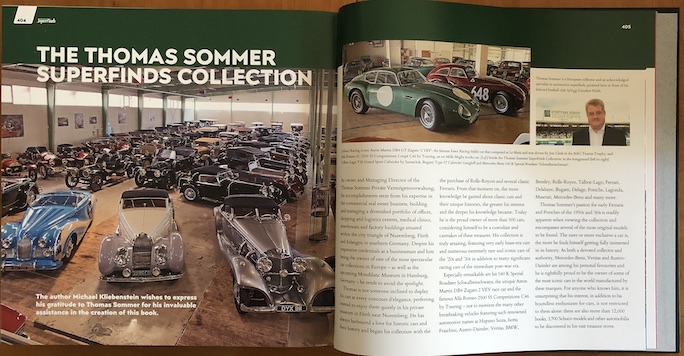 Even the book title begs a question: is it just clever shorthand for what the book is about? Or, considering that the author is German, is it an homage to the ultra hush-hush private museum of the same name owned by German collector Thomas Sommer (above)? Not only is he singled out in the Acknowledgments for his “invaluable assistance” (and Sommer, in turn, is quoted as saying this is “the most stunning car book I have ever seen”), a 13-page closing chapter shows some of his 500+ cars. Some of them may well have passed through Cupellini’s hands—but the meagre one page of text says nothing about his connection to the book. (Sleuthing 101: when the book would later win one of the five Special Prizes at the 2021 Motorworld Book Awards the commendation referred to Sommer as  “co-producer.” In the movie business, which makes up a good chunk of Kliebenstein’s CV, a producer credit is often the token title given to anyone who puts up money.)

So, it is what it is, and none of the above should detract from a book that really can be an important resource for restorers and historians. The author early on makes the point that he specifically does not consider the photos themselves art because as opportunistic snaps that was never their purpose. Kliebenstein writes that he left the captions sparse so as to leave the images uncluttered to better allow the reader “to soak up the atmosphere” but a more practical explanation is surely that the source material was negatives and transparencies which would have offered minimal space for Cupellini to record data. A good number of photos are not even dated, and to wring as much car-specific information from the images Kliebenstein has enlisted the help of a very long list of marque experts. (Also, the book ends with an invitation for anyone with additional information, or questions, to contact the author.) That the 900-odd images are not sorted in any sort of discernible order makes them no less entertaining but creating an index by marque/model would have been so easy.

We always say about photo books that you are never “done” with them. Every time you look you will see something new or have your memory yield another long-forgotten nugget. This could not be more true of this book. Many reviews of this book drone on about barn finds and wistful nostalgia and lost treasure and priceless cars—but that’s not at all what its purpose is.

Incidentally, the book shows and describes at some length a very famous car Cupellini once found, restored, and raced: Ferrari Dino 246/60 Formula 1 racing single-seater chassis 0011 that was raced by the likes of Luigi Musso, Olivier Gendebien, Phil Hill, Jean Behra, and Wolfgang von Trips. It sold at auction just as this book came out for a cool $1.3 million! 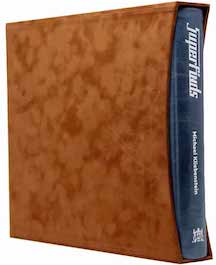 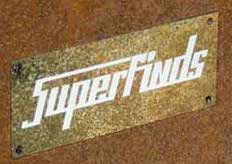 In keeping with the theme of “distressed” cars the velvet (slipcase) was given a mottled effect, the leather (cover) is heavily grained, and the metal plate with the book title has four faux-rusty screws!

Auto-tecture: Unique Designs for the Contemporary Garage »
« A History of Hudson And Its Nine Most Fabulous Cars