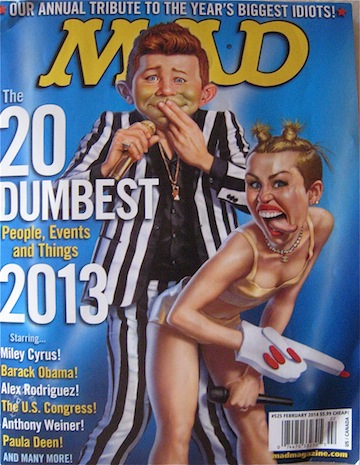 “The reading of a comic book is an act of aesthetic perception and intellectual pursuit.”

I’m surely not the only one who feels that growing up on Mad Magazine improved, enriched, and enlightened my life. Discovered my brother’s stash, and this must have been in the early years, 1957 or so. I found Alfred E. Neuman to be an Everyman and William M. Gaines a benign uncle who would take me down some dark roads—as well those in sunlight—but never let me get lost or hurt there.

For the uninitiated, here an express version of Mad’s history: Somewhere in 1947 (my birth year by the way), Gaines took over the business, Educational Comics (EC), publishing Bible Stories, Science Primers and the like, from his father Maxwell. Gaines soon became a father in his own right, plucking from the pile the very best artists, Jack Davis, Joe Orlando, Graham Ingels, Harvey Kurtzman, et al, gestating then giving birth to awesome and terrifying wonderlands: Crime Suspense Stories, Weird Fantasy, Weird Science, Two-Fisted Tales and a handful of others. Gaines is the one, at the 1954 US Senate Subcommittee on Juvenile Delinquency, who avowed to the august panel before him that an artistic rendering of a severed head on the front cover of an EC (now Entertaining Comics) magazine was altogether fitting. Senator Estes Kefauver: “Do you believe this cover displaying a woman’s severed head and a bloody axe is in good taste?” Gaines: “Yes, sir; I do, for the cover of a horror comic.” Soon after, as the ghoulish and the explicit were banned by a newly minted Comics Code Authority, EC lost its bite, and predictably these comics died away. But it was two years before this when EC gave rise to something more important culturally and more beloved emotionally than that of even the drooling ghouls of The Vault of Horror or the tough cops of Crime Suspense Stories. Gaines said, “Let there be Mad.” And it was so. Gaines probably never rested, not even on the Sabbath, and in the year 1952 anno domini, Mad #1 was delivered. 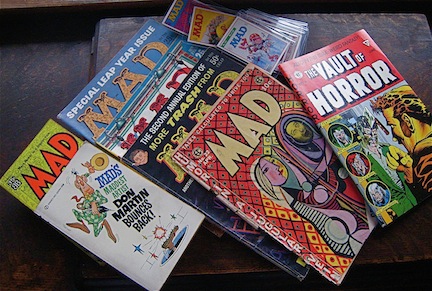 Always cheeky, always funny, always bizarre, always skirting well over the edge of propriety, Mad became first a successful comic book, then, with the July 1955 issue, to circumvent the grasp of The Code, it morphed into a magazine—25¢ (cheap), larger than a comic, glossy cover, surviving the decades, always there at your local newsstand. Today there are no competitors; Eh!, Panic, Nuts, Cracked and Crazy (the first three are EC titles) all withered on the vine of parody. Over time Mad became a franchise, involved in TV, cyber-publishing, merchandizing, and a publishing house for coffee-table products gathered from their achieves. Mad is an institution, an American Icon. As a pre-adolescent kid from Pittsburgh, through Mad Magazine, an amazing world opened unto me, a world of the tongue-in-cheek, idiocy, political satire, the ridiculous and the fine art of comic masters who are still revered today. And there was always Neuman, the asinine kid with the bad haircut and the missing tooth, gracing most every cover from #30 on, and who always seems to know quite a bit more than he lets on. So, 525 issues later, how is Mad doing?

Quite well, thank you. Now, someone who hasn’t picked up a copy for a long while, say ten or twenty years, may get his feathers ruffled by the 21st century version of Mad. First the advertisements, for video games and in-house merchandizing, may be off-putting. Gaines, who died in 1992, was not comfortable with advertising, and when Mad went from comic book to magazine, advertisements were not welcome. Comic historians agree that he was an honest man who felt that advertising would subvert the magazine, make it beholden in some manner. Gaines’ politics are worth noting. He was one of the few who judged the foibles and the disasters—and the occasional wisdom—of politics and politicians on their merit, or lack of same, rather than along party lines. Mad number #60, the January 1961 edition, had two full covers, back-to-back, flipping right-side-up to upside-down, one congratulating Nixon, one congratulating Kennedy—a perfect symbol for Gaines’ viewpoint. Gaines would be comfortable with #599. This issue features their annual “The 20 Dumbest People, Events and Things.” Number one on the list is “The Dysfunctional U.S. Congress,” a searing satire showing the rapacity and incompetence of this distinguished and honorable body; it uses, as a springboard, the cartoon image of the original advertisement for the film Animal House to expose Michael Grimm, John Boehner, their comrades Sarah Palin, Michelle Bachman, Karl Rove, and the rest of the gang (of idiots?). Eliot Spitzer and Anthony Weiner are also skewered in this article, as is President Barack Obama as “The Drone Ranger” with his faithful Delawarean companion, Vice President Joseph Biden, dressed like Arnie Hammer and Johnny Depp respectively from the recent Lone Ranger movie. The Texas Ranger badge becomes the Great Seal of The President of The United States; the bird on Biden’s head is true to the film. In earlier issues, Mad had championed Obama but was never afraid to point out his faults, leading to Mad #503’s cover art: Neuman wears an “I love [heart] Obama” tee shirt, but, with a Sharpie, adds an “ed” to the heart. A balanced view all told, going after not one party or another, but rather going after the stupidity and malignancy of both—but, all of that said, I always found a liberal leaning. Using a parody of Communist poster art, Mad #525 ridicules Russia’s official legitimization of gay bashing. Others brought to task in the “20 Dumbest” are Paula Deen (for her mouth), Miley Cyrus (for her butt), George Zimmerman (for his zeal) and the NRA (for their over-fondness for gun distribution).

Mad could never survive on politics alone. Broad humor, often, admittedly with a twist of politics, abounds in “Letters and Tomatoes,” “The Fundalini Pages,” “The Strip Club” and “A Mad Look At…”. Considering this last feature, someone, as above, who hasn’t looked inside Mad for a decade or so, may be shocked by a panel in this article, a look at sleepovers: A bunch of boys sneak in to harass the girls who are sleeping over, but, finding the wrong door, surprise a naked heterosexual couple, Mom and Dad, in their marriage bed. Or eyebrows may be raised over one of The Strip Club cartoons. Three panels: A woman giving birth as a male OBGYN presides. “I’m sorry to inform you that your baby was born without a head.” The woman is aghast, the doctor curious. Third panel: “No, wait a second…Here it comes!”

Another ongoing feature that may seem unfamiliar to an old reader would be “Planet Tadd!!!!!” This is a parody of a 14-year-old boy’s cyber-page—and here Mad although obviously reaching for laughs, presents a rather sympathetic look at the lad, realizing the more painful situations and embarrassments prone to preadolescence. On the other hand, there is one feature that would be comfortable; over the years Mad has always included a movie or TV lampoon, and #525 offers a takeoff of the TV show The Following, here re-titled “The Swallowing.” I must admit to a shortcoming here; I don’t know this show. But Mad, true to form, gives enough information for one unfamiliar with the target to get a good idea of the show’s cast and content. In this case Mad, through its well-drafted yet zany artwork, objects strongly to the heavy amount of blood and gore, along with a certain inanity, that The Following presents to its viewers.

Again, my point of reference here is to a Mad sympathizer who just hasn’t picked up the magazine for a long while and comes across #525. Because we all tend to love that which we knew as children and young adults, this reader may feel a loss upon finding that old, favorite artists are no longer being published. The much respected Mort Drucker, who, by the way, has a hardback book advertised in this issue, most likely would have been assigned “The Swallowing;” he has been replaced here by Tom Richmond. Richmond may lack the precision and elegance of Drucker’s best work, but he makes up for it with tougher, harsher caricatures and a tad more of salient silliness. He also knows his popular-art history; on the splash panel of “The Swallowing,” on an office corkboard, labeled “Cult Leaders,” are all six of The Three Stooges.

Don Martin, “Mad’s Maddest Artist, as he has been touted by the franchise, who died in 2000, is, of course, unavailable, but the artist Tom Bunk, who has been with Mad for years now himself, is a worthy successor. Martin had worked mostly in line drawings, drawings quite bizarre and outrageous; Bunk, on the other hand, is a full-color artist who uses much more detail in his work. The details, however, suggest a Martin sensibility—along with an appreciative understanding of Basil Wolverton, another classic Mad artist. His take on Rand Paul is an illustrative example. Paul’s hair is a tangled nest with a small bird pulling a worm from the coils; the man has a thick hole in his forehead with a teabag flopping out. Flies circle his head and forefinger, and bullet holes, slopping tea and a Band-Aid mar his podium. And, sadly, William Elder and Wallace Wood have already flown to the big art studio in the sky, but Kevin Pope and Rick Tulka are creditable replacements. So, yes, Mad Magazine is doing fine, and will be long available for future generations to rediscover.

by John Ficarra, Charlie Kadau, Joe Raiola, and “The Usual Gang of Idiots”