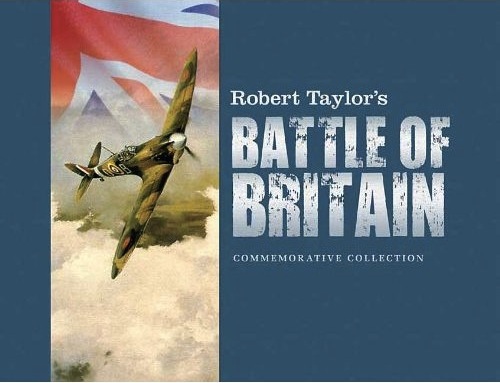 World War Two’s Battle of Britain was the first major campaign in which aerial warfare was a, if not the, decisive factor. Its 70th anniversary in 2010 prompted this compilation book of paintings by one of the dominant names in aviation (and other military) art.

Taylor’s work is widely published but a large number of the secondary illustrations shown here (studies, roughs etc.) have not been seen in print before.

Moreover, the 27 oil paintings presented here are accompanied by his own extensive commentary about the specifics of the scene (both in terms of historical and painterly detail) and the larger context of the battle. It is especially the descriptions of technique and underlying ideas—insights that really only the artist can offer—that make this book stand out and singularly useful to fellow artists. Aviation buffs too will recognize and appreciate Taylor’s signature level of realism in capturing technical and aerodynamic aspects, be it the size of a rivet or the position of a flap.

While the hardcore historian might say the book offers nothing new in its treatment of the event overall (which isn’t its purpose anyway!) there are quite a number of micro details about specific engagements that are, in most cases, provided by the very people who participated in them! Taylor is personally acquainted with such figures on both sides of the conflict—who regard his work highly—and this sort of input is one of the key factors that allow him to do uncommonly detailed work in the hyper-realist manner. He also uses logbooks and Combat or Operations Reports (nowadays declassified and easily available) to extract critical detail to give his work a documentary quality. From all this he derives the sort of information that allows him to depict multi-layered scenes, such as a fairly shot-up plane at a nose-up attitude that a pilot would recognize as just above stall speed while the pilot of a lower-flying escort casts a weary eye on his stricken comrade, replete with angle of light and type of clouds correct for the time of day and geographic location. None but the people who were there at that moment would know whether all this is accurate—but the viewer can safely assume it to be so because this sort of forensic approach is Taylor’ s stock in trade. (Considering the size of the original paintings even this 11˝-wide landscape-format book can of course only offer a semblance of their detail and impact.) Weather, sky, clouds, visibility, and spatial relationships are aspects Taylor is able to render with remarkable nuance and realism and these factors, too, distinguish his work.

The realism is all the more noteworthy because Taylor is essentially self-taught. (Readers who are, or want to be, artists themselves will now be gnashing their teeth.) Already as a boy he had a knack for drawing and single-mindedly pursued it as a vocation. After leaving school at the age of 15 and putting in two years at the Bath School of Art he has worked in the world of art ever since, even if not, initially, behind the easel. Working as a framer and then restorer at an art gallery schooled his eye, and emulating the techniques of others sharpened his own and gave him versatility. Soon, the gallery sold his work—and a chance encounter fifteen years later led to commissions from a military publishing business with whom Taylor remains associated to this day.

He’s been at it for four decades now, his work—first maritime subjects and since the early 1980s aviation—is widely collected privately and by institutions who pay serious money, and almost all of it today is available as limited-edition prints (some of which signed by the people in the painting). The lowly $35 for this book are an incomparably cheap way to get up close and personal with Taylor and his work.

From high-adrenaline dogfights to ferry flights in almost pastorally calm skies, the book shows various episodes from the summer and autumn of 1940 in, presumably, chronological order. Each painting is covered on 4–6 pages, with one full-page reproduction and several smaller, sometimes b/w sketches, rejected proposals, or close-ups. The detailed accompanying text explains the specific scenes both in terms of operational details and artistic issues such as perspective and dynamics. The latter, along with the rejected drafts, offer invaluable pointers to the artistically minded reader. The captions generally do not state original size or date of creation but do disclose current whereabouts/original client.

Regardless of the extent of the descriptions, the paintings must be studied in great detail to yield their secrets. Just what it is that makes Taylor’s work so singularly recognizable is not easily expressed. Witness the Introduction by writer Michael Craig who comes from the fine art publishing world, has worked with Taylor, and here waxes about Taylor’s “deep personal insight” and how “many of those who flew and fought” have remarked that “somehow Robert’s work manages to impart a true, highly graphic and sometimes uncanny understanding of what air warfare was really like.” All true—but what does it reveal about the how and why, especially considering that Taylor is neither an aviator nor a combat veteran, nor, for that matter, a formally trained artist?

The text is augmented with sidebars, often with photos, presenting bios, pilots’ reminiscences about specific aircraft; excerpts from a Combat Report; and even peripheral items such as the role of the Limited Edition Fine Art Print. Very nicely designed and presented (no dust jacket!); really excellent Index.

Vulcan Test Pilot: My Experiences in the Cockpit of a Cold War Icon »
« Mustang Boss 302: From Racing Legend to Modern Muscle Car