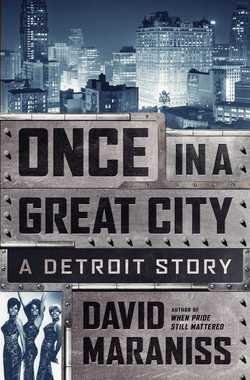 An extraordinary book that, as another critic put it, is “an unforgettable portrait of 1963 Detroit, muscular and musical, during the early days of Motown and the Mustang.”

Given its title, you would expect to read about the white heat of Detroit’s industrial muscle at a time when both its power and potential seemed almost without limit—and you won’t be disappointed. But the motor industry did not exist in isolation and the sociological and cultural context of the motor city as described by Pulitzer Prize winner (1993) and Washington Post associate editor Maraniss is fascinating and insightful.

To say the book is well researched is an understatement and, whilst a less assured writer would have struggled to convey such staggering layers of detail, Maraniss is masterful in his evocation of what some might consider Detroit’s finest year. The key themes of politics, crime, corruption, race, sport, religion, business, and music overlap and coalesce into a quite brilliant evocation of a lost era.

Motown music and muscle cars are what attracted me to read this book but I learned so much more. The book is populated by huge characters like Henry Ford II, Berry Gordy, Martin Luther King Jr., and (father of Aretha) Reverend C.L. Franklin. And Lee Iacocca, “that goddamn wop” as Henry Ford contemptuously called him. He changed his tune when Iacocca’s genius created the legendary pony car, the Mustang. Ford said, “His ability lies 99% in sales. But it isn’t only in selling cars—it’s selling everything . . . himself, an idea, anything . . . the Brooklyn Bridge if you will.”

The story of the Mustang is fascinating; until its debut Ford had been widely regarded as the steady workhorse of the car industry, the brand being regarded as solid, reliable, and unremarkable. Thanks to Fomoco’s (relatively) enlightened labor policies, Ford was often the preferred choice of car for (in the language of the day) colored people but in the economic hothouse of postwar America Iacocca had spotted the growing youth market, the same demographic that had lapped up rock ‘n roll and which now wanted a car that was much more than just transport. The kids just wanted fun, fun, fun. And they sure got it with, in Iacocca’s words “this little pony car, the car that would give an orgasm to anyone under thirty.” A high school kid from Louisiana even wrote to Henry Ford II to say he was starting a Mustang fan club as the car would be “bigger than Elvis or The Beatles.” Everybody knows Mustangs were cheap and the starting price a measly $2368. But perhaps not as cheap as you might have thought; the cheapest Mustang cost 50% of the average US salary in 1963, which in 016 equates to the ‘Stang costing about $16,000. Fiesta or Yaris prices then, but such was the Mustang ’s appeal that, within a fortnight of its launch, orders for 50,000 had been taken.

But this book is about so much more than Mustangs and Motown music because it also covers nearly everything else that happened in Detroit in that momentous year. As a UK reader with only a childhood memory of 1963 England (cold, grey, dull, and enlivened only by the Cuban Missile crisis and The Beatles) this book was an insight into a transatlantic world of intrigue, commerce, glamour and succes, and in Cinemascope Technicolor. The level of detail in Maraniss’ research can be almost overwhelming, but for anybody wanting to read a hugely vivid portrayal of the Motor City of half a century ago I recommend this book. And the biggest shock I had when reading it was to learn that, even in an era of booming economy and boundless optimism, some studies in 1963 were already predicting the so-called “white flight,” the depopulation and urban decay that culminated in the civic bankruptcy of 2013.

Posted Under: Automobiles, History, US | Author: John Aston | No comments yet