The unlikely story of a couple of youngish Ferrari owners in the 1970s venturing into the spare parts world to satisfy their own requirements only to recognize a wide unmet need and growing a multi-faceted business around it.

Most people only know Moretti beer—no connection to the coachbuilder and constructor of all sorts of interesting mechanical things. This is the first complete history.

If the Almighty Interweb is any indicator, Lamborghini has way more followers than you could possibly expect. But why? This book is not concerned with finding answers to that, it just presents a solid and well put-together primer.

An Arese is not an Alfa model but the name of the place where they were made, and this book contains hundreds of Alfa Romeo’s own archival photos of it.

These small darty cars are as popular in historic racing now as they were in period. They were not cheap then and are shockingly expensive now so a book is a painless way of getting into a car of which Bäumer has become the foremost chronicler. 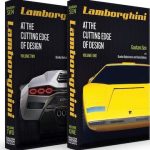 Was there really a time when used Ferraris were (relatively) cheap enough that even young people could afford them, use them as daily drivers, even race them without qualms? Yes! And Niles was the enabler—thanks to him so many Ferraris found their way to SoCal that they were easier to find there than in Italy.

A handy and well-written quick-reference type of book that also includes many tables of race results. This is not meant to be a History of the Universe but specific to select cars.

The author has owned his Countach for over 20 years now. He knows the good and the bad and in this book puts it all into context. From company history to supercar philosophy to maintenance to driving tips it’s all here.