Pegasus, The Heart of the Harrier 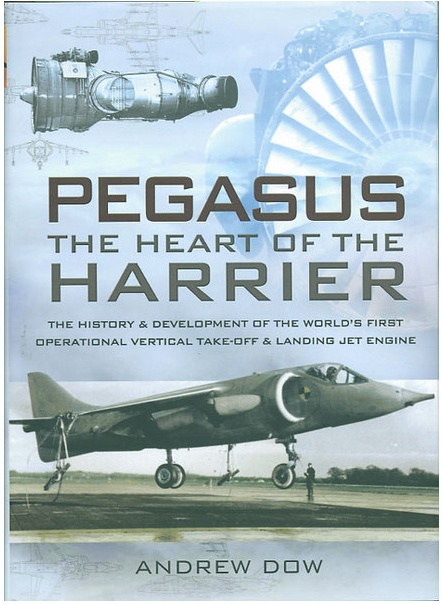 Being one of the most innovative gas turbine aircraft engines ever developed, it is gratifying to see a book dedicated to the Rolls-Royce Pegasus, arguably the world’s first successful VTOL aircraft engine. VTOL has been an aviation goal for decades with many failures along the way. However the Pegasus is one of the very few to successfully achieve this objective and furthermore become a commercial success. But it was a long hard road. It’s hard to imagine but the origins of the Pegasus go back over 50 years! Using the Bristol Orpheus as a starting point the author guides the reader trough the various combinations of compressors and turbines with a great deal of emphasis placed on the political, contractual, financial, and legal aspects. Obviously, the foregoing considerations are germane to any large-scale and complex industrial endeavor, however, the hard-core technophile may be disappointed at the lack of priority afforded the technical side of this pioneering power plant. As an example, it would have been nice to see drawings and a better description of the nozzle actuators, the cannular combustion chamber, how the engine was mounted in the airframe, more details of the Harrier aircraft such as the landing gear, the “puffer” control system etc. Although Rolls-Royce was one of the pioneers with VTOL via vectored thrust using the one-off Thrust Measuring Rig, a.k.a. the “Flying Bedstead, this early development effort was written off in one short sentence and an equally short footnote.

At times the book almost reads like an Agatha Christie murder mystery particularly when the acquisition of Bristol/Siddeley by Rolls-Royce is described. This episode did not put Rolls-Royce in a favorable light, being somewhat reminiscent of their acquisition of the Bentley Motors car company in 1931. The author claims that one of the primary reasons for the acquisition was the fact that Bristol/Siddeley was in negotiations with Pratt & Whitney who were experiencing difficulties in developing the JT9D compressor. BS was a recognized world leader in axial flow compressor design at the time. These events took place in the early to mid 1960s when Rolls-Royce was developing its competitor to the JT9D, the RB211. With this piece of high-level maneuvering Rolls-Royce hoped to steal a march on P&W.

February 1971 will always represent the nadir of Rolls-Royce, which is when this venerable and proud company declared bankruptcy. This unfortunate event is covered well with regards its impact on Pegasus development. This fiasco was primarily caused by insurmountable problems with the RB211. Interestingly, the RB211’s woes were corrected by bringing in retired Rolls-Royce engineers, foremost being Sir Stanley Hooker.

In conclusion, this is a well-researched book but may miss its target audience by focusing on the wrong aspects of Pegasus development. Readers with a fascination with legalities, contractual negotiations, finances, high-level executive scheming and the like will enjoy this tome. No book is as pure as the driven snow when it comes to accuracy so it’s inevitable with a book of this size and complexity that a couple of errors snuck in but overall the book seems to be exemplary in this respect. Reproduction of photographs and line drawings is mediocre. The line drawings in particular could have benefited from some doctoring via one of the many software packages available for this purpose.