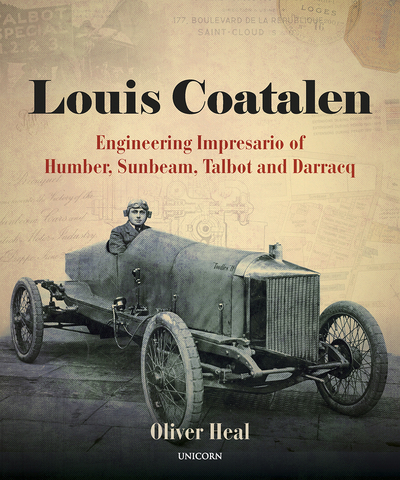 “He was a ‘Man in a Hurry’, not just because of his fascination with speed and his determination to win, but also because, as a young man before Word War I he speedily brought considerable success to two different manufacturers, thus firmly establishing his reputation as an important engineer. Later he led a life that involved not only fast cars that won Grand Prix races and set up World Land Speed Records, but one which also included stories of industrial espionage, beautiful women, drugs, and expensive yachts.”

What, you need more reasons to want to read about this fellow??

When you use, probably without ever thinking about it, your oil pump that is submerged inside the sump or, say, shock absorbers or balanced wheels, do you realize that one Louis Hervé Coatalen (1879–1962) had a hand in it, either thinking of or advocating for such innovations? If you are at home on the fringes of aviation, his name might bring to mind a diesel aero engine—not successful, but no less of an idea that needed to be explored. 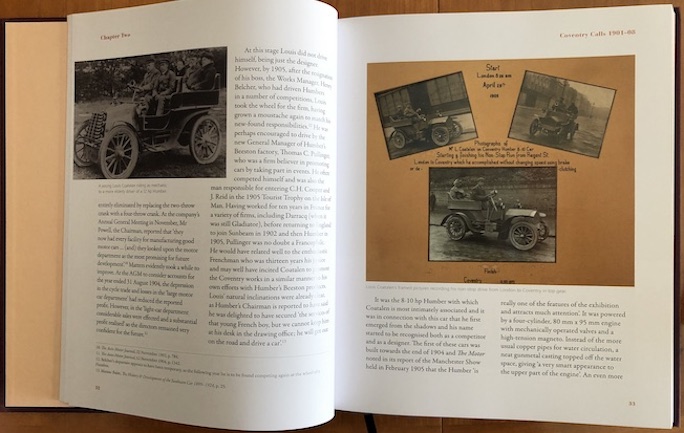 Who would have foreseen when young Master Louis attended a Trade School for Workers and Foremen (just to thwart arguments with people who know just enough to be dangerous: only later called the École des Arts et Métiers) that he would become an automobile engineer/designer/ racing driver/businessman whose fingerprints are on so many things that so many people know but without knowing of him? And who would have thought that there is no biography of the man? He’s been dead for decades, having remained professionally active until pretty much his last breath, at 82. The work side of his life, his output and contributions and patents, are reflected in a host of technical and historical works and marque books, but that is just one side of life. 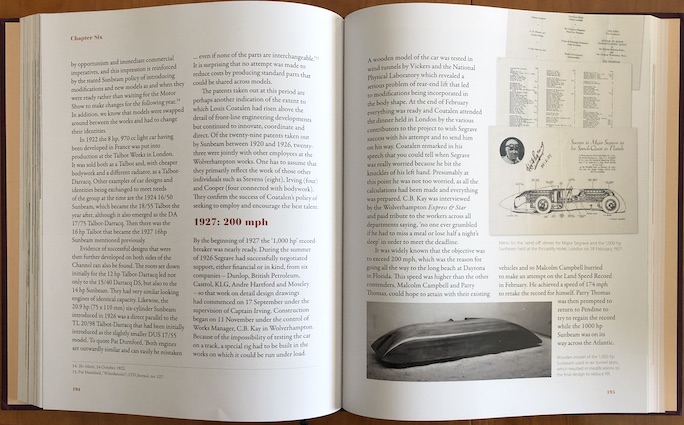 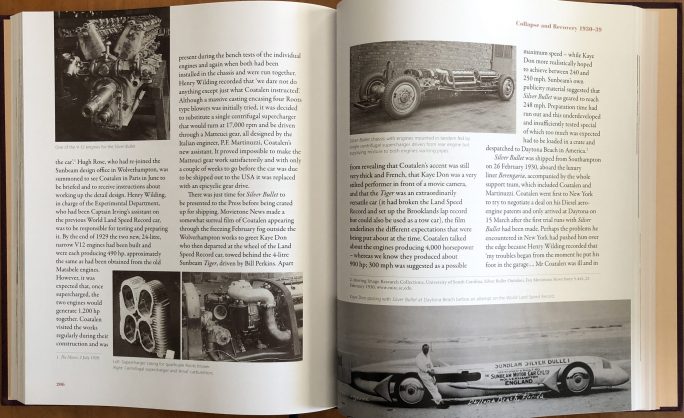 That this book exists at all, and in such a sophisticated form, is in no small measure due to the Michael Sedgwick Memorial Trust which specifically exists to encourage (i.e. underwrite) the “recording of Road Transport History.” Credit too to the 16 “subscribers” who voted with their checkbooks early on and helped defray the cost.

One is so tempted to call this book a unicorn—not because it is published by the Unicorn Group but because it has entirely uncommon features, the sort of things that make books truly useful to serious consumers. Consider, for instance, that it not only has an Index—plenty uncommon these days—but that it is so thorough as to reference footnotes (which, conveniently, are printed right on the bottoms of the pages on which they are called out so there’s no tedious page-flipping required)! And consider the generous type size, set in two columns no less . . . the people old enough to already know anything about Coatalen are the very ones whose beady eyes are too tired to cope with 6 pt type! Unicorn says about their books: “We use the very best designers, editors, researchers, photographers, indexers and publicists and project-manage these to make beautiful books for our global audience to cherish.” And so they do. 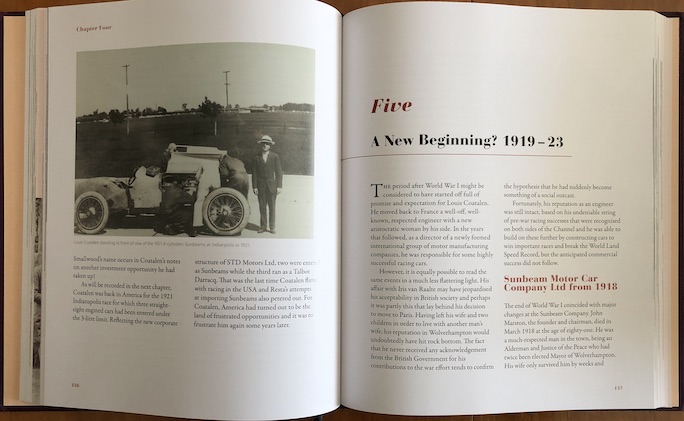 If you still haven’t warmed to the subject, know that this book is simply a good read, written in an engaging manner, with polished prose, with an unhurried exposition in which everything has its place and there’s a place for everything. The book touches on many things and you will form a multi-faceted view of the era/s no matter your area of specializiation. 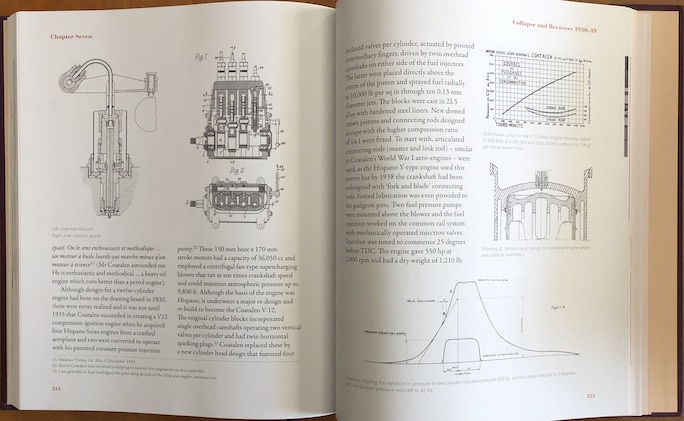 That Coatalen has such a motivated chronicler in Oliver Heal is not coincidence. If you look up Coatalen in the Oxford Dictionary of National Biography you’d find a very nice entry by one Anthony Heal—the author’s father, whose byline might as well have been “Mr. Sunbeam” because he was the recognized authority on the marque. 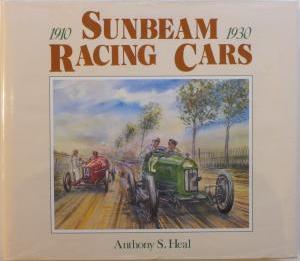 In fact, if Sunbeams are your thing there is no way you wouldn’t have his indispensable 1989 book Sunbeam Racing Cars 1910–1930 (ISBN 9780854296064). Naturally he owned Sunbeams, some important ones too. By the way, it is he who used the word “impresario”—see subtitle—to describe the man he considered his hero in The Times following the publication of Coatalen’s obituary.

Long story short, Heal Jr. was imprinted early on with an affinity for LC and his work, and an abiding interest in vintage motorcars in general.

There’s another point of overlap, peripheral in a way but still noteworthy: Coatalen was at least the fifth generation of skilled metalworkers in his family (a 10 generation deep family tree is reproduced here) and Heal too comes from several generations in the same, or at least related business: Heal and Son Ltd., founded in 1810 as a feather-dressing business and quickly becoming a British chain of furniture and furnishing stores, achieving particular acclaim under craftsman, designer and finally Chairman Sir Ambrose Heal (1872–1959; the subject of O. Heal’s PhD thesis, which actually became a published book, Sir Ambrose Heal and the Heal Cabinet Factory 1897–1939 (Oblong, ISBN 978-0957599239). Oliver Heal, in other words, can relate to the Coatalen saga on multiple levels. 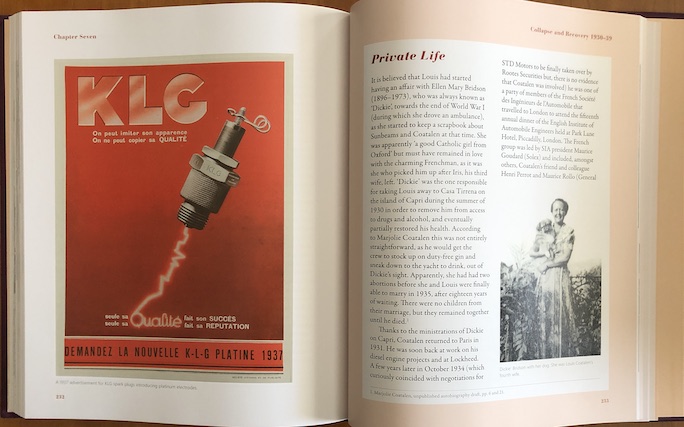 It should not come as a surprise to learn that a forceful personality such as Coatalen’s would be perceived as . . . turbulent. Heal reports LC’s own son as thinking of him as an “erratic tyrant” and “not keen that any eulogistic biography of Lois should be published.” One can only imagine what spirited discussions this must have led to around the dinner table—because LC’s son, Hervé Coatalen, is Heal’s . . . wait for it . . . father in law! But we’re getting into the weeds here; the point of this excursion is merely to underline that if a Coatalen biography had to be written, and it had!, Oliver Heal is the man.

The story is broken up into 8 chapters, obviously chronological. To reiterate an earlier point: obviously all strands of a life interweave and are pursued, but this book is meant to flesh out the personal side of the man, not evaluate minutia about his industry achievements. Further to that end, each chapter will have at least one, often long sidebar entitled “Private Life.” 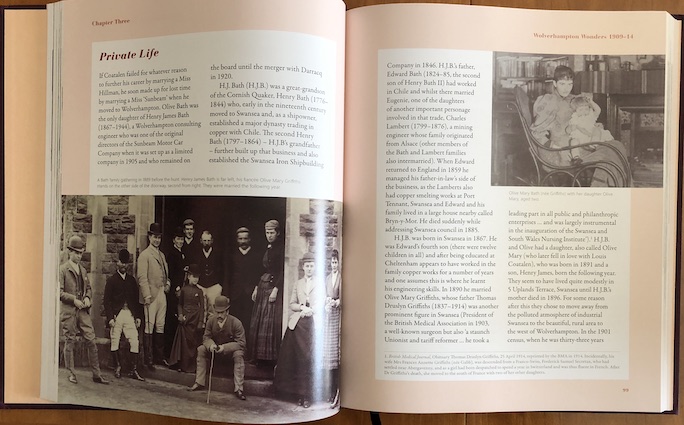 Appended are LC’s Competition Achievements 1905–1914, a list of patents filed in Britain and/or France 1912–1962 (the post-1931 titles are in French only), and a Bibliography. A good deal of the material, especially the illustrations, has not been published before, drawing heavily from the author’s father’s archive and Coatalen family papers and an unpublished draft autobiography (about which the book says too little). The choice of illustrations is entirely satisfactory, and they are plentiful and beautifully reproduced.

In view of the opening quote it is ironic that elsewhere in the book “the whirlwind that Coatalen was” is described in a 1911 magazine story as never seeming to be in a hurry—it took Heal twenty years to puzzle this book together, so don’t rush through it!

Lastly, our readers are nothing if not curious so know that another Coatalen was immortalized in book form, just about a year before this one, and also by a Heal, Oliver’s wife and Herve’s daughter Annik. A professional ballerina and dance teacher herself, she wrote about her mother, an entirely underappreciated painter, woodcutter, illustrator: Anna Coatalen, Art for Happiness et Bonheur (ISBN 9781912690077; same publisher, so you have an idea what to expect).

Park Ward: The Innovative Coachbuilder  »
« Neo Classics: From Factory to Legendary in 0 Seconds